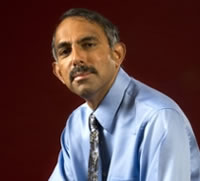 Atlanta, GA, October 17: The National Academy of Medicine (NAM) has elected K.M. Venkat Narayan, MD, MSc, to its 2016 class of leading health scientists and international members. The NAM was formerly the Institute of Medicine.

Election to the NAM is considered one of the highest honors in the fields of health and medicine and recognizes individuals who have demonstrated outstanding professional achievement and commitment to service.

“We are tremendously proud of both of our Emory faculty who are innovators and trailblazers in their areas of research,” says James Curran, MD, MPH, who is the James W. Curran Dean of Public Health at Emory’s Rollins School of Public Health and an elected member of the National Academy of Medicine.   “Dr. Narayan continues to further enhance his leadership position as an internationally renowned diabetes researcher. Election to the National Academy of Medicine highlights individuals who have made major contributions to the advancement of health, and he is most deserving of this distinguished honor.”

Dr. Narayan is Ruth and O.C. Hubert Professor of Global Health in the Hubert Department of Global Health and director of the Emory Global Diabetes Research Center at the Rollins School of Public Health. He is one of the world’s leading researchers on type 2 diabetes.

Prior to his time at Emory, Narayan spent 10 years at the U.S. Centers for Disease Control and Prevention, leading science efforts in his role as chief of the Diabetes Epidemiology and Statistics Branch. He was also an intramural researcher at the National Institute of Diabetes and Digestive and Kidney Diseases, and worked on the first diet-exercise intervention study in the Pima Indians. His research has focused on the epidemiology of type 2 diabetes, and on large national and international intervention studies to prevent and control the disease, and to translate science into practice and policy. Known for his interdisciplinary work, he is currently also exploring intriguing differences in the pathophysiology of type 2 diabetes in South Asian and other developing countries’ populations globally.

Narayan is a member of several international and national committees on type 2 diabetes and other non-communicable diseases and most recently won the American Diabetes Association’s Kelly West Award for outstanding achievement in epidemiology. He is the Danish Diabetes Academy visiting professor at the University o fCopenhagen.