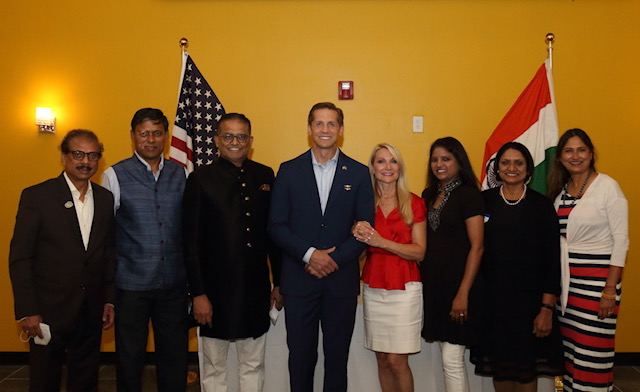 Atlanta, GA, October 9, 2020: Dr. Rich McCormick, an Emergency Room Physician at Northside Gwinnett Medical Center is running for US Congress from District 7.  He spoke at a recent fundraiser hosted by Indian American physicians and community leaders, at Madras Chettinad restaurant in Alpharetta.

“Dr. McCormick had humble beginnings which included a newspaper route.  Early on he responded to the call to serve his country,” said a press release issued by the organizers of the event.  “He did a 20 yr stint in US Marines, where he flew Helicopters in combat zones such as Afghanistan, Africa and Persian Gulf.”

“As if being a Marine pilot’ life wasn’t tough enough, he plunged into the arduous world of medicine, at Morehouse School of Medicine.  He assumed leadership roles in a racially diverse student body. After earning an MD, he once again went to Afghanistan, to head the Department of Emergency Medicine.”

The evening was orchestrated by a spirited Dr. Syamala Erramilli.

Dr. Sreeni Gangasani who introduced Dr. McCormick, highlighted the fact that the emergency doctor’s hard work is legendary. Somewhere he found time to get an MBA.  His current workday starts with the night shift in the ER and reaching his voters by the day.”

In a town hall setting, he took several questions regarding his policies, including his pet project: to nourish the American dream for all immigrants and citizens alike,” said the release.

Dr.McCormick spoke of Indians as model citizens. He felt that Indian Students and their parents were the reason schools in Gwinnett and Forsyth counties continue to be the best in the state. He cited, as an ER physician, he rarely saw Indian patients as victims of drug abuse, sexual assault or fugitives from justice. He welcomed the idea that through sheer industry, many Indians dominate the tech sphere and the physician space.

He also talked of his trips to India as President Clinton’s entourage, including some interesting trips in Indian taxis.

Dr McCormick is married to Debra, who is an oncologist.  They live in Suwanee.