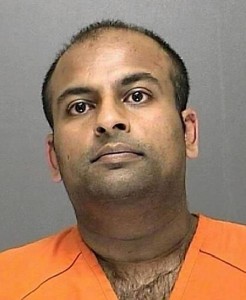 Washington, Feb 21 (IANS) An Indian-American man in Florida is facing first-degree murder charges for allegedly beating his sleeping father to death with a sledgehammer following an evening “playing puzzles”, according to a media report.

He told police investigating the killing that he was “playing puzzles with his father and his father stated something to him that upset him”, and ultimately decided to attack his father with a sledgehammer later that night.

Vinayak Shanbhag was sitting on the couch with his mother when officers arrived on the scene to assist on a medical call Saturday, the paper reported.

Officers noticed blood on the headlight of a car parked at the home.

A pool of blood was discovered on Pandurang Shanbhag’s bed along with a bloody pillow on the floor. A bloody sledgehammer was also found in the bedroom, according to the News-Journal.

The suspect told police he remembers “waking up and entering his father’s bedroom and striking him in the head repeatedly with a sledgehammer,” according to a police report of the incident cited by the News-Journal.

He added that he had been violent with other family members in the past. Police said the incident marked the first time they were called to the home.

His mother, 60-year-old Rukma Shanbhag, told police she sleeps in a separate bedroom from her husband because she suffers from arthritis.

She said she heard her husband coughing early Saturday morning, but didn’t suspect anything was wrong because Padurang Shanbhag was battling a cold. But she eventually investigated and found blood all over the place.

She claimed her son admitted to the killing, saying he told her, “I did it,” but didn’t elaborate. She then called 911.