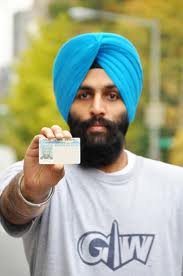 Washington, Feb 21 (IANS) A Sikh American in Minnesota drove away with a victory when he won the right for the community in the US state to wear their turbans in driver’s licence photos.

Last month when Blaine resident Jatinder Singh went to the local Driver and Vehicle Services (DVS) office to get his licence renewed, he was told his turban was not allowed in his driver’s license photo.

He then went to the Sikh American Legal Defence and Educational Fund (SALDEF), a community organisation, which pointed DVS officials to the department’s explicit policy on religious accommodation.

In fact, the department’s own guidance material shows examples of compliant photographs, including a full-face photo of a Sikh American man wearing a turban.

Following SALDEF’s intervention, Singh was able to get his licence with his articles of faith intact.

Apologising for the incident, DVS director, Patricia McCormick, pledged to work with SALDEF on religious accommodation training of DVS staff “specifically, related to accommodating the Sikh turban” as needed.

Jasjit Singh, executive director of SALDEF commended “Jatinder Singh for identifying an opportunity to make change, for the benefit of Sikh Americans in Minnesota and elsewhere, who now see a shining example of a fair policy properly enforced”.