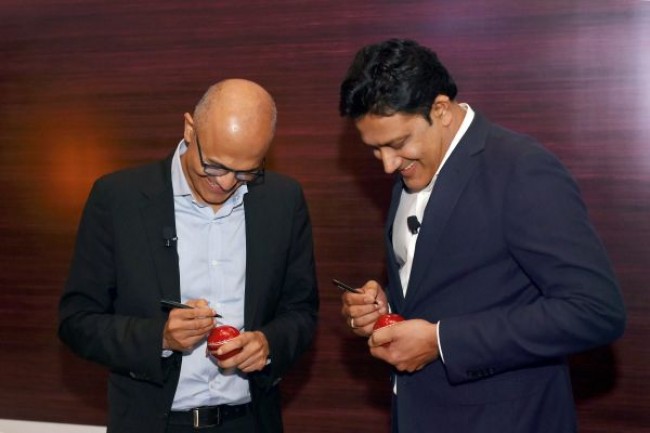 Gurugram, Nov 7 (IANS) For Satya Nadella, the leadership values he learnt while playing cricket in India helped him compete vigorously in the face of uncertainty — putting the team first and bringing out the best in everybody — during his 25-year career at Microsoft.

On a smog-hit afternoon as he shared the stage with veteran cricketer Anil Kumble here on Tuesday during a discussion on his book “Hit Refresh,” Nadella said you certainly need to have empathy in life to succeed.

“Microsoft’s core business is about meeting the unmet and unarticulated needs of the customers. There is no way we can succeed in life if we don’t have empathy. I have come to realise that empathy needs to be developed and it is not a destination,” Nadella told the audience.

The birth of his child Zain — who was born in 1996 after being diagnosed with cerebral palsy — was an event that changed his life forever.

It was then when Nadella learnt about the value of empathy from his wife and decided to focus on improving Zain’s life instead of delving upon how this was going to affect him on the personal level. Afterwards, Nadella kept hitting refresh on his emotions and outlook towards life.

“If you take Microsoft, we are in existence for 43 years. I have been associated with the company for 25 years now and every five years, we face an existential threat. But we are still here. That means we are doing something right to stay at that level, to continue to question status quo,” Nadella noted.

For Kumble, India’s 1983 World Cup victory served as an inspiration for the people in the country.

“For the Indian cricket, the 1983 World Cup win was a ‘Hit Refresh’ moment that inspired millions,” Kumble said.

“For me, the ‘Hit Refresh’ moment came in 2001 during the Test series against Australia at the home turf and I could not take part owing to injury. We lost the first match but then I thought we shouldn’t lose the confidence and that confidence led us to win the series 2-1,” he added.

When Kumble asked Nadella about Artificial Intelligence (AI) and Internet of Things (IoT), the Microsoft CEO replied that three key technologies would lead to a massive shift soon.

“The three technologies are Mixed Reality, Artificial Intelligence and Quantum Computing. The man-machine interface — from graphics to touchscreen and now speech — has made technology more natural and intuitive,” Nadella told Kumble.

They also discussed the positive impact of intelligent technologies on cricket and how these will redefine the game for players as well as viewers.

Prickly, provocative: How to Make Enemies and Offend People