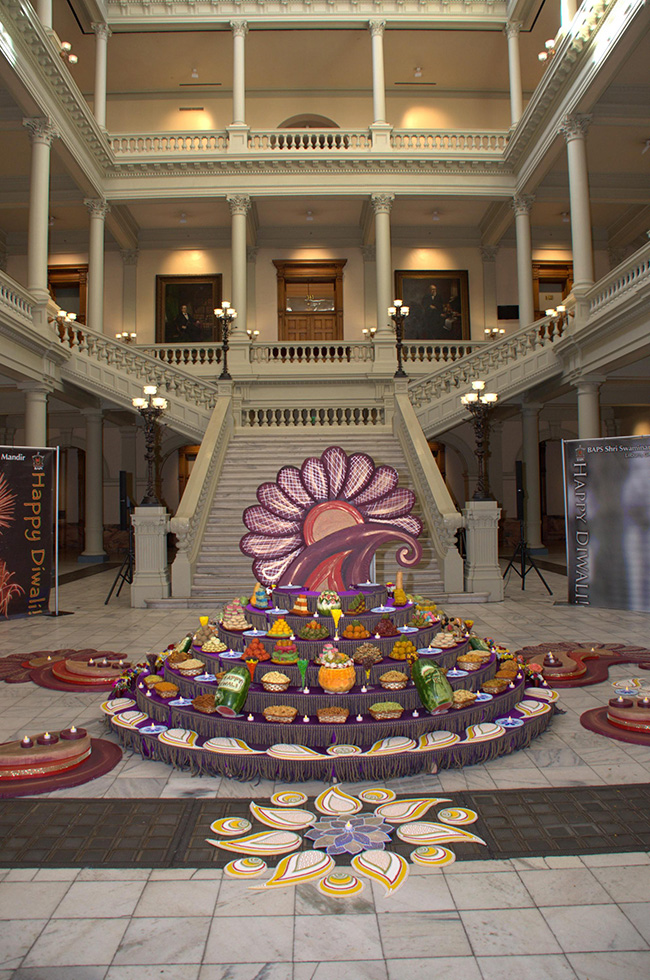 The guests began arriving around 11 a.m. and after cheerfully exchanging greetings, stood admiring the colorful rangoli and decorative miniature annakut elegantly set up in the public square of the southern wing of the Capitol, and posed for photographs.

The short program began with BAPS youth reciting ‘shanti mantras’ for world peace. Emcee Mitesh Patel said that it is a matter of great honor and pride that an Indian festival is being celebrated for the first time under the gold dome. He said that in 1991,South Africa’s iconic leader Nelson Mandela, at a Diwali celebration in Durban City Hallhad said: “We have been engaged in a battle against the forces of darkness along lines similar to the Hindu scriptures. At this time of Diwali, as we light the lamps we symbolize and remember: enlightenment over blind faith; prosperity over poverty; knowledge over ignorance; good health over sickness and freedom over bondage.”

Patel added that in addition to the celebration of Diwali, it was also a time to celebrate the immense contributions of the Indian community as a whole. He asserted that Indian Americans have, are and will continue to develop the great State of Georgia and the amazing land called United States of America. 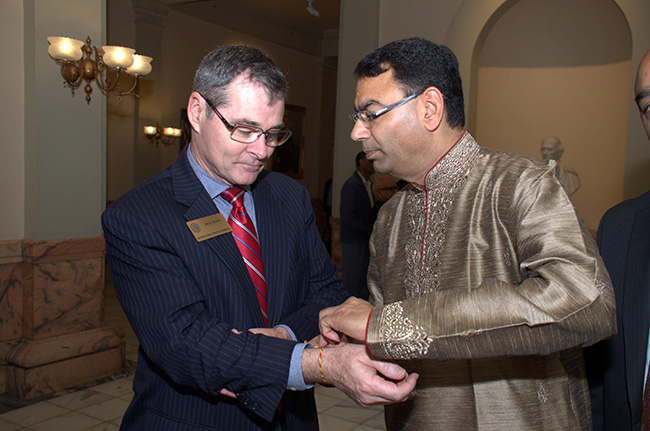 Ritesh Desai said Diwali celebration at the GA State Capitol is historical not because it is the first time but also because this will be the first of many more to come.

Consul General Nagesh Singh, in his brief remarks said, “US-India relations have never been better before in all aspects of high growth trajectory. We are engaging with the USo n different issues. We mostly discuss issues of politics, security, trade, commerce, economic affairs and at times, the importance of Indian culture and the role it plays in promoting better understanding between our two countries is sidelined. In my view it perhaps overtakes all other aspects of our relationships and that is the importance of this function in this temple of democracy which represents the people and State of Georgia.  And for this initiative, I would like to congratulate BAPS and Ritesh for starting this and I hope in times to come we can expand this participation not only in the State of GA but in the region if people are willing to come down.” 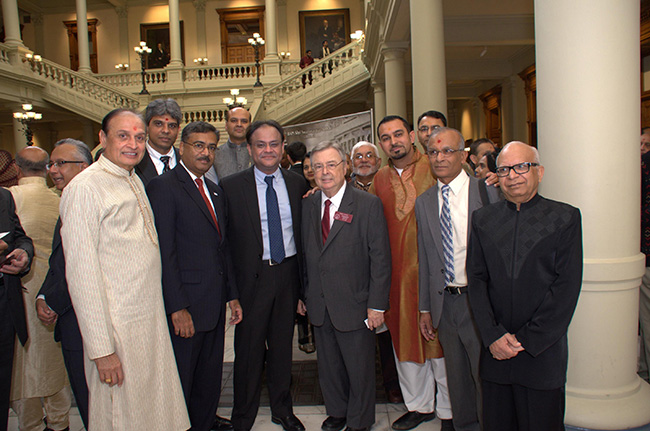 Consul General Singh expressed deep gratitude to the Governor and to the administration of the State of Georgia for making the Diwali celebrations happen.

“Let me say that at times some people describe Diwali as a Hindu festival, while some call it an Indian festival, but I think it has truly become a global festival,” he added. “The message that comes out of Diwali is an universal message, an eternal message of Truth, victory of good over evil, light over darkness, and by celebrating this and spreading the message you are doing a wonderful service to people of Georgia, United States and rest of the world. We are trying to portray a message that there can be unity in diversity.”

Ritesh Desai recognized Consul (Head of Chancery) Mr. D.V.Singh; Consul R. Srinivasan; and Vice Consul (PS) to CG Mr.Thimothy Jetty and lauded the Consulate team for doing a fantastic job in taking care of the community and its needs, even at odd hours.

Dr. Angelina Mehta is a Licensed Naturopathic physician at Progressive Medical Center,Atlanta. She has also been with the US Marine Corps for ten years where she has earned many promotions and decorations. She has proudly served in two deployments to Iraq in 2003 and 2006. 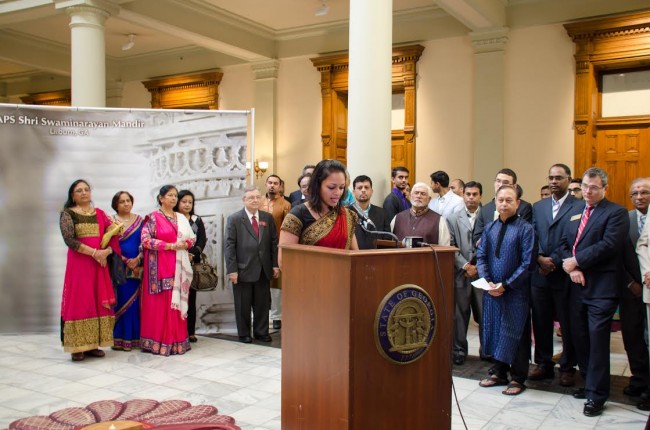 Dr  Mehta spoke about the significance of Diwali. She said it is one of the most important, popular and colorful festivals celebrated in India and all over the world, traditionally by lighting the Diya (lamp) as a reminder to dispel inner darkness with light. It is time for family to get together, to pray together, to light the diyas and fireworks and to enjoy delicious food together. It is also an occasion for thanksgiving, traditionally celebrated with annakut (a mountain of food) with thousands of vegetarian items. It is a time when charity, goodwill, family values and the love of God are celebrated and reinforced. It is also a time of reconciliation and consolidation, to forgive the misdeeds of others over the past year. It is a time of renewal, reflection and resolution, of strengthening community spirit by reaching out to those in need, and to remind us of unity in diversity.

GA Public Service Commission’s Commissioner Tim Echols urged the Indian community members to come to the Public Square between January and March to meet and greet lawmakers and to build relationships.

“I have learnt that relations matter if you want to advance the agenda of your community, if you want to increase your importance and want your voice to be heard,” he said. “And as we celebrate this Festival of light and as we think of driving darkness from ourselves, from our neighborhood, from our State, I think of the importance of training our children in understanding wisdom, justice, moderation. There is so much we can do in Atlanta.”

Echols also thanked the community for its many contributions.

GA State Rep.Hugh Floyd D-99 (GwinnettCounty), who is the oldest supporter of the Indian American community said that he and Ritesh Desai bonded together and worked together over a long period. “I appreciate all your friendship. I live in District 99, where the BAPS Mandir is located. I have seen its construction from day one and watched the progress of the project to the very end. It is an amazing monumental architectural wonder,” he said.

GA State Rep. Pedro Marin (D-96) has worked with other Latino, African-American and Asian leaders to organize the community to gain political voice through the State at various levels of government. He is one of the first Latinos ever elected into the GA General Assembly. Marin commended Dr. Mehta for her great service to the community. He said the Capitol welcomes diversity.

“We are not just white or black. We are diverse. He also exhorted the Indian community to visit the Capitol during January to March and interact with theGeorgialawmakers.

Anand Mehta, CFO of The Boys and Girls Club of America moved the Vote of Thanks. He thanked all the dignitaries, BAPS volunteers and the guests. He further thanked GA Governor Nathan Deal, Lt.Gov. Casey Cagle, and Sec.of State Brian Kemp for being great partners in supporting BAPS. Mehta concluded with a hope that there would be a bigger turnout at the next Diwali celebration in 2016.

At the end of the program, packets of Diwali sweets were presented to all.