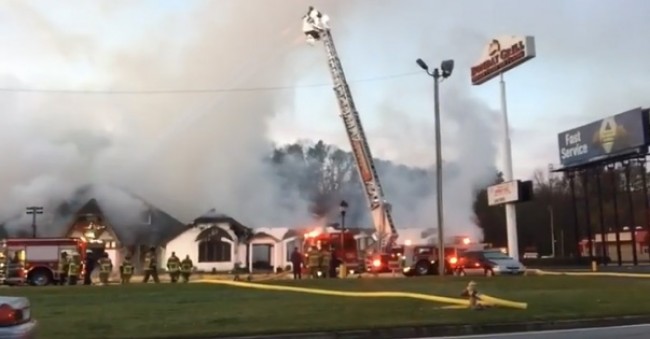 UPDATE (1.44 p.m.):  The fire is now under control and Savoy Drive is open to traffic, according to Dunwoody Police Department.

Atlanta, GA: Enormous flames were shooting from the roof of The Bombay Grill in Chamblee early Sunday morning, reports WSBTV. No one was at the restaurant when the fire started and there are no reports of injury.

A driver passing by on I-285 saw smoke coming from the Indian restaurant around 4:30 a.m. Sunday and called 911. When Dekalb County firefighters arrived, they found smoke through the entire restaurant. Quickly, the fire spread through the building, making it dangerous for the crews to get inside.

“Right now we are fighting a defensive fire,” Capt. Halani Lobdell told WSBTV. “We initially tried to go interior, but due to the extent of the fire we were forced to back out.”

Arson investigators will investigate the fire today to determine how it started.

NRI Pulse is attempting to reach the owners of Bombay Grill for their comment.

Historic Diwali Celebrations at the GA State Capitol by BAPS