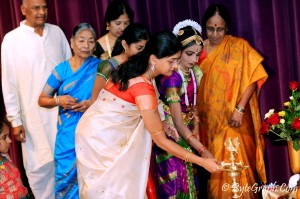 Photos by Bytegraph.com
(Click on photos for larger view)

Atlanta, GA: Eleven-year-old Isha Kambalapally, a student of Nataraja Natyanjali Dance Academy, mesmerized the audience at her Kuchipudi rangapravesam (solo dance debut) with grace, confidence, expressions and smile. Isha is perhaps the youngest kuchipudi dancer to have her rangapravesam in the Atlanta area. Her riveting performance was a tribute to her own talents and the dedication of her guru Neelima Gaddamanugu to the art form.

The rangapravesam was held at Duluth High School on Sunday, May 18. 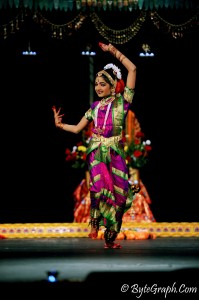 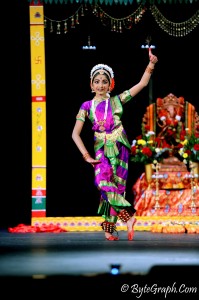 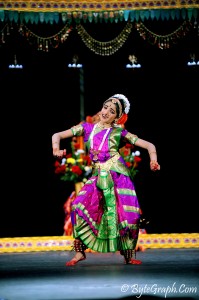 Isha performed six dances during the rangapravesam.  Some in the audience had come just to support the little kid but at the end they had to admit that she did a marvelous job and couldn’t stop praising the guru and the dancer.  Guru Neelima herself performed her rangapravesam at an early age and knows what it takes to prepare a child for a rigorous, demanding performance that lasts several hours.

“We know how difficult it is to explain the meaning of the songs written in our mother tongue, but Isha understood every song and was excellent at expressing their meaning through her dance,” said a well-wisher. 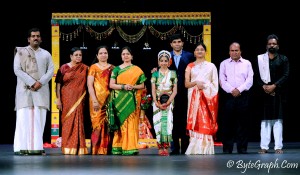 The traditional lamp was lit by Isha’s grandparents in the presence of her extended family.  The first dance was a prayer to Lord Ganesha – Vatapi Ganapatim composed by Muthuswami Diskhitar in ragam hamsadwani, talam adi.  The next song was Dasavatara Sabdam composed by Rangaswamy in ragam kalyani and mohana, talam adi.

Despite being little kid Isha’s expressions in this song were amazing.  This is followed by Koluvai Vunnade which describes Lord Shiva’s benevolent and fearsome forms.  This song is composed by Shahaji Maharaja in ragam shanmukha priya, talam adi.  Next was  the tarangam where the dancer dances on a brass plate and was performed very well by Isha.  This is composed by Narayana Teertha in ragam mohana, talam adi.

Guru Neelima’s choreographic skills were seen in the next song, ashtapadi.  These are hymns composed by sanksrit poet Jayadeva and have eight lines.  This song depicts the love in the form of devotion by Radha towards Krishna.  The dance concluded with thillana composed by Mangalampalli Bala Murali Krisha in ragam kalyani, talam adi.

Orchestra support was provided by Priya Chandrasekharan on the veena, G.S.Rajan on the flute and Santosh Chandru on the mridangam. Shanti Medicharla provided the vocals.

Guru Neelima was ecstatic as this rangapravesam was challenging to her and her academy.  She is one of the youngest dance teachers in metro Atlanta and feels proud about her young student who stood up to her expectations.  “Her hard work can be seen in the confidence with which she performed on the stage,” she said.

Isha too was very happy as she had made her guru proud.  Chief Guest Narender Reddy had only praises for Isha and said, “If this is the performance of an elementary school kid, I can’t wait to see this girl’s performance after five years.”

He said he was surprised to see the dancer’s expressions, grace, and stage etiquette and congratulated the Guru for producing such a marvelous dancer.

Prabhakar Putta was stunned to see the ease with which Isha performed the dances and admitted that he did not expect such a great performance, given the age of the dancer.

Isha’s parents Malathi and Venkat Kambalapally thanked the audience for their support.