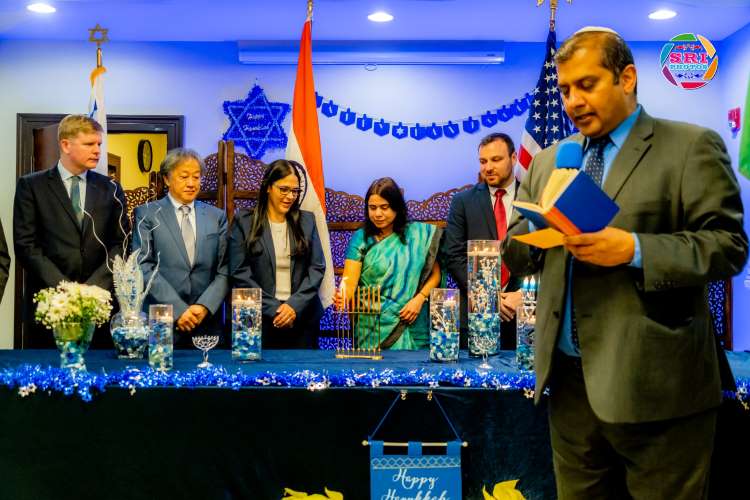 Atlanta, GA, January 10, 2020: “Hanukkah is a celebration of miracles. As we light the Hanukkah candles in commemoration of the miracles that occurred in the land of Jerusalem about 2300 years ago, it is fitting to think of the miracle of our relations, of our two ancient cultures discovering their commonalities and having the wisdom to turn our differences into an advantage of cooperation and enrich each side by merging our experiences for the benefit of both our people,” stated Hon. Anat Sultan-Dandon, Consul General, Israel at the 5th annual Hanukkah celebrations hosted by the office of the Consulate General of India, Atlanta on December 15, 2019.

Extending a warm welcome to guests and attendees, CG Dr. Swati Kulkarni cited the hearty exchange of wishes between PM Modi who wished in Hebrew, only to be reciprocated by Israeli Prime Minister Netanyahu in Hindi. “This is the spirit of Hanukkah, to spread warmth and glow to everyone,” she said. India celebrates its diversity in Diwali, Christmas and Hanukkah, all of which have the light in common with a uniqueness that fosters communal and social bonding, peace and prosperity, added Dr. Kulkarni.

“Lessons of Hanukkah is that a small group can make a big difference. When resources are limited, faith matters as the Jewish people have shown to the world.”

Thanking Dr. Kulkarni for the warm hospitality, CG Sultan-Dandon highlighted the evolvement of the relations between India and Israel over the past 27 years. “It is difficult to believe today that up until the establishment of the relations, Indian national  passport carried a stamp that said it was valid across all nations of the world except Israel,” noted CG Sultan-Dandon, adding that in stark contrast, currently, five direct flights in full capacity carry Indian and Israeli passengers across the two nations. “The establishment of direct flights is not only significant for the bilateral relations between the two countries but also Israel’s normalization with the Arab countries, as these flights pass over Saudi Arabia, and several gulf states, a flight pass which until fairly recently would’ve been impossible,” she remarked.

Charting the growth of relations between India and Israel, CG Sultan-Dandon said early relations were based mainly on defense, but reciprocal visits at senior levels, including the President of India’s visit in 2016, PM Modi’s visit in 2017 and reciprocal visit of PM Netanyahu have laid the foundations for signing of the many agreements in many fields including agriculture and water, in the field of space, Jewish and Indian communities within the countries in many locations across north America and Europe.

“Israel is in our hearts and India is in our blood,” stated Reuben. Apprising the crowd of Gandhiji’s deep Jewish connections, he cited Mahatma’s relation with Dr. Herman Kallenbach, a South African Jew who donated his “Tolstoy farm” to him that housed the satyagrahis, and Dr. Abraham Solomon Erulkar, an Indian Jew from Mumbai, who relocated with him from Mumbai to Ahmedabad in 1915 after Gandhiji’s return from South Africa. “It was because of these Jewish connections that “Gandhiji would always mention that I am a Hindu, Christian, Sikh, Muslim, Jain, Buddhist, Parsee and a Jew.”

“We have to fight for the narrative of the true story of India in the media,” said Reuben, highlighting the tolerance of all its religions by Indian people, the Jewish community and synagogues in particular, that have never been attacked int the 70 years of the history of the creation of the state of Israel and India, despite being located in Muslim majority neighborhoods and in the thick of violence in the mid-east.

Reuben commended PM Modi’s efforts is restoring relations between the two nations. “There is a law which states that you cannot get an OCI card if you have served in a foreign military in Israel,” said Reuben, adding that PM Modi it altered to help second and third generations connect with their Indian heritage.

relations. Judaism was one of the first foreign religions to arrive in India in recorded history. The traditional account is that traders of Judea arrived at Cranganore, an ancient port near Cochin in 562 BC, and that more Jews came as exiles from Israel in the year 70 AD, after the destruction of the Second Temple. The distinct Jewish community in Cochin was called Anjuvannam. The still-functioning synagogue in Mattancherry, The Paradesi Synagogue is the oldest activesynagogue in the Commonwealth of Nations. It is estimated that India’s Jewish population peaked at around 20,000 in the mid-1940s and began to rapidly decline due to their emigration to Israel after its creation in 1948.