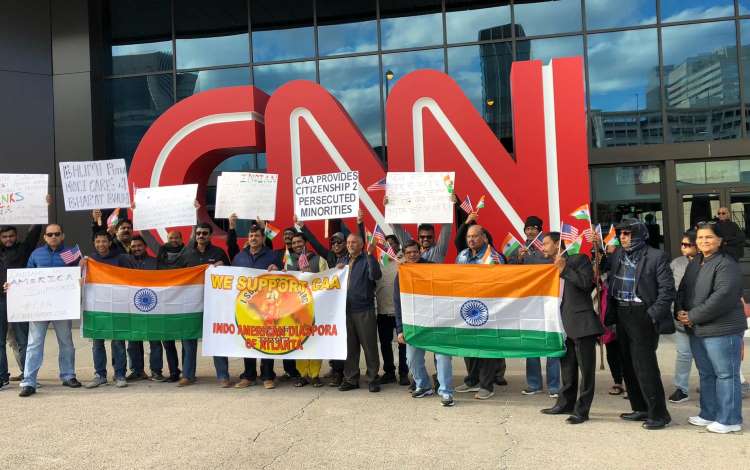 Atlanta, GA, January 10, 2020: Indian-American groups congregated outside the CNN headquarters in Atlanta on January 4 to express their support for the amended Citizenship Act.

“Even though it was a cold windy afternoon, more than a 100 representatives from different Indian American organizations gathered in front of CNN headquarters to express their solidarity and support to the Indian government in taking a bold step towards helping the persecuted minorities from the neighboring countries,” said Rajeev Menon, one of the organizers of the rally.

Meanwhile, an anti-CAA protest is planned in Decatur, GA on January 19th by South Asian groups.

The Bharatiya Janata Party (BJP), on January 5, launched its nationwide door-to-door awareness campaign in a bid to gather support for the amended Citizenship Act (CAA), Defence Minister Rajnath Singh in Lucknow and Chief Minister Yogi Adityanath in Gorakhpur met people from different walks of life to clear the air on the issue.

The 10-day campaign is expected to reach out to three crore families and the BJP leaders will tell the people “how the Congress and other Opposition parties are spreading lies about the CAA and inciting rebellion and anarchy in the country for their politics of appeasement”.

Defence Minister Rajnath Singh, while campaigning in Lucknow, met retired Justice Khemkaran at his residence to inform him about the CAA.

Rajnath Singh urged people not to believe in rumours and misinformation spread by the opposition and others.

He said that some opposition parties are trying to mislead people and that the CAA will not impact any Indian citizen. “Our party has decided that we will launch a door-to-door campaign to inform people about the CAA,” he said.

Rajnath Singh further said: “We don’t discriminate on the basis of caste and religion. People belonging to the minority community, who are being persecuted in Pakistan, Bangladesh and Afghanistan, will be given citizenship through this Act.”