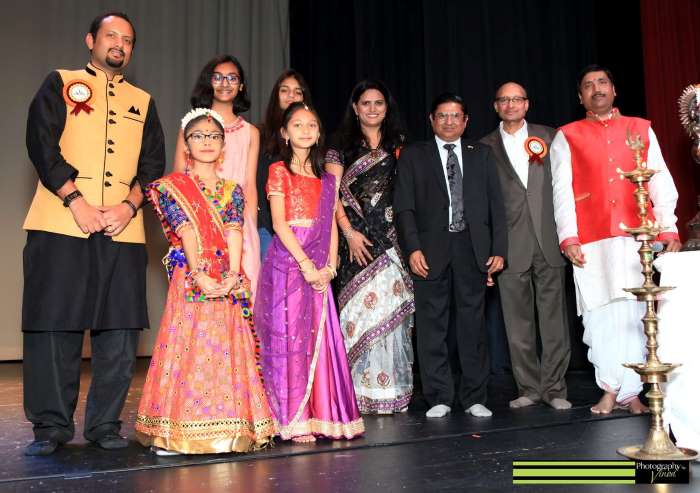 Atlanta, GA, January 10, 2020: In a diligent effort to gift wings to children in rural and tribal communities in India, the Atlanta Ekal Vidyalaya chapter set out on the formidable endeavor to organize “Ekal Se Taal Mila ke Jhoom” on December 15, 2019, a fundraising event with the ambitious overarching objective to orchestrate an entertainment program with some of the best artists from all over Atlanta in one auditorium. The notion was conceptualized seven months in advance of the event, and meticulous and coordinated preparation began swiftly to ensure that it ran smoothly and effectually.

Delineated “a very successful mission” by Indian Prime Minister Narendra Modi, the Ekal Vidyalaya Foundation is a non-profit entity that has been operating since 1986 in neglected rural areas to eradicate illiteracy. Its innovative and revolutionizing single teacher schools have metamorphosed thousands of communities, empowering them through the provision of free basic education, healthcare, and vocational training. With support from 42 United States and various international chapters, Ekal is impacting the lives of over 2.7 million boys and girls, through over 100,000 schools operating productively from Kashmir to Kerala. The Atlanta volunteers were dedicated to increasing those numbers, and they begin to collect donations, sell tickets, arrange for performances, and choreograph what was destined to be a scintillating, sensational show.

The event began at 6:30 pm after a succulent dinner at Mountain View High School with a warm welcome from the GA Event Coordinator, Neetu Singh Chauhan, who emceed the show, candidly expounding upon her personal connection to the cause. This was followed by Regional VP Ajay Upadhyay’s expressive rendition of “Ek Pyar Ka Nagma Hai” as he urged the audience to begin donating. The well-attended event was graced by the esteemed dignitary Consul Davender Singh who lit the lamp, representing goodwill, knowledge, and the spread of divine grace. Alongside him were Chapter President Shiv Aggarwal, Ajay Upadhyay, Pandit Gyan Prakash Upadhyay chanting the mantras, and the event’s youngest participants, including Anoushka, Prachi, Esha, and Pragya, a 7th grader who donated $700 that she collected on her birthday.

The captivating show commenced with the foot-tapping number “Rhythm Speaks” by Kalaxya Dance Academy. Founder and Director Mital Patel, who aims to have a multicultural approach in preserving the dynamic and rich traditions of Indian classical dance, choreographed the enthralling traditional dance with a touch of modern rhythm. Next was Chandra Dance Academy’s “Rajwaddi”, a mesmerizing Rajasthani Kathak piece choreographed by Founder and Director Brittny Chandra, a prolific performer as an internationally recognized Kathak artist hailing from the Jaipur Gharana style. Both performances showcased talented dancers, riveting music, and a promising, upbeat start to the show.

The ensuing performance was choreographed by Geet-Rung School of Dance and Music Founder and Director Divya Srivastava, who has always extended her undying support to Ekal. She, once again, put in her diligent efforts to entertain and enthrall the audience by showcasing the graceful and delicate dimensions of Kathak in an enchanting performance of  “Deewani Mastani”. As a captivating conclusion to the initial dance segment, Nritya Natya Kala Bharti Dance (NNKB) Founder and Director Kumud Savla, an internationally recognized artist honored by the Government of India, had her students perform two pieces- a compelling performance to “Ghar More Pardesiya”, amalgamating the pizzazz of Bollywood dance with the grace of Kathak, and an invigorating medley of unforgettable Bollywood Jazz classics. These four dance schools were received with wholehearted applause for their spectacular performances.

This was followed by the introduction of four of Atlanta’s greatest vocalists, as they stunned the audience with their extraordinary solo performances. Purnima Mathur, an accomplished singer for All India Radio and a prior part of the music talent show SaReGaMaPa and Zee Antakshari, awed with her collection of classic medleys, including “Radha Na Bole Na Bole”, “Zara Si Aahat”, and “Bole Re Papihara”. Saras Jain, a gifted Indian classical vocalist, and Atlanta Indian Idol finalist, astounded the audience with his soulful vocals and dexterous techniques in his breathtaking interpretation of “Chunar”. Lakshmi Rao, a talented performer that has been known as the “Asha Bhosle of Atlanta” for many decades, gave an ebullient rendition of  “Yeh Ishq Hai”. Finally, Pankaj Bhargava, known as the “Kishore Kumar of Atlanta”, had audience members engaged and dancing along to his foot-tapping Amitabh-Kishore Medley.

After an enlightening presentation on Ekal by Preeti Tanwar and a heartfelt vote of thanks by President Shiv Aggrawal, the dancing continued, with Kalaxya presenting  “Garba Masti” with a modern twist of infinite love to Radha Krishna and “Lavni Mix”, synthesizing traditional rhythms with fun-filled Bollywood beats. Chandra Dance Academy then exhibited their classical roots in the entrancing “Conversation between 323”. Geet Rung showcased a variety of the latest Bollywood hits with the exciting, student-choreographed “Punjabi Medley”. The show concluded with the four extraordinary vocalists uniting to perform a medley of  “Aankhon Mein Kya”, “Chup Gaya Nazare”, “Dheere Dheere Chal”, “Aa Dekhein Zara”, and many more that culminated with thunderous applause.

The show was an indubitable success, raising 100 schools at the event in addition to monetary donations, including a $1000 contribution from Suvidha Indo-Pak Groceries and a $20,000 pledge from 27th Investments Group. Prior to the date, 64 additional schools were donated for the event from August 24th. The volunteers and attendees were proud of all the wings gifted, looking forward to accomplishing even more through Ekal Vidyalaya.