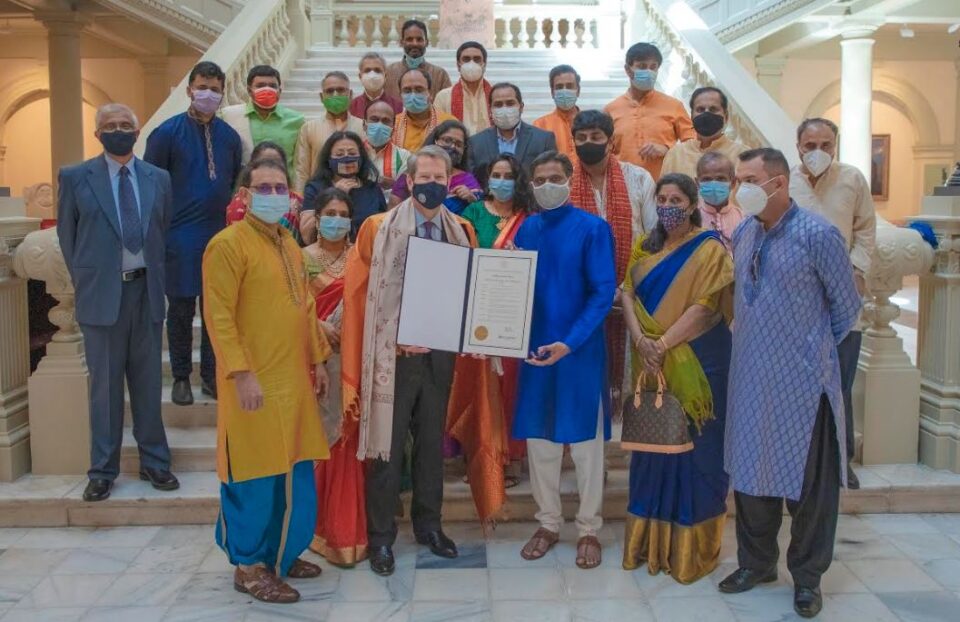 April 12, 2021 marks the beginning of the New Year (Ugadi) of the Telugu language-speaking community across the world following the Lunar calendar.

Ugadi has been an important and historic festival of the Telugu community worldwide, and is celebrated with great fanfare; gatherings of the extended families, and a community sumptuous feast.

Ravi Ponangi, a well-known journalist and community leader, along with others had come up with the idea of initiating a formal request to the Georgia Governor to call Ugadi day, April 12, 2021 as Telugu language and Heritage Day.

The proclamation signed by Georgia Governor Kemp states, “Telugu is one of the longest surviving classical languages and Telugu has rich literature. The Telugu community of Georgia is educating future generations in their language through various organizations and events; and April 12, 2021, marks the beginning of new year of Telugu people across the world following the lunar calendar. The Georgia Telugu-speaking community plays a pivotal role in keeping the Indian heritage and culture intact, as well as in enriching Georgia’s cultural diversity. The Georgia Telugu-speaking community has been contributing to the state in the fields of medical and engineering research, politics, legal, language, culture, and tradition, along with economic welfare; and

The Georgia Telugu community celebrates their rich culture and heritage throughout Telugu Language and Heritage Month with various literacy programs such as Telugu language reading, singing, writing, poetry, and speech competitions”. According to the US census and statistics, the Telugu community, is one of the most diverse and fastest-growing groups in the US.

There are over 500 Telugu-speaking people in the academic/training profession right from elementary schools to universities. In fact, Emory University has a Chair of Excellence in Telugu studies, established with a donation of over 1 Million dollars from the Telugu people of Georgia.

The rise of Telugu was connected to the links forged between the two Telugu speaking states of Telangana (Hyderabad), Andhra states and the Georgia engineering and technology industries. Armed with the knowledge of Telugu Studies gained at Emory, these students and professors will be able to more effectively conduct research as professionals in Andhra Pradesh. Emory University is a major U.S. destination for the study of Telugu language, history, literature and cultures, and the endowed professorship builds on that focus.

U.S. President Biden and First Lady Jill Biden also conveyed their wishes to Asian Americans and Pacific Islanders a happy, healthy and prosperous Lunar New Year. They said “racism, harassment, hate crimes” against this group of people is “simply wrong” and called for unity in the country.

Georgia’s senior Republican and commissioner of Georgians First Commission, Ritesh Desai expressed his joy in attending the celebration of the proclamation at Georgia capital and said “This is truly exciting.  We are one community! Let’s celebrate and share our unity and appreciate all our differences. Thank you for all that you do to maintain and preserve our culture”. Many dignitaries and individuals who are holding highest offices expressed their happiness on getting recognition to Telugu language and Heritage in a foreign land and said they are proud to know of this good news on ‘Pavamana Ugadi’ day.

On receiving the proclamation from governor, Ravi R Ponangi, a journalist friend of the community and longtime resident of Georgia said, “Since the 1980s, Atlanta has witnessed many Telugu literary fests like Ashtavadhanams, Rajitaavadanams, Trigalaavadhanam, poetry presentations etc., This proclamation is a memorable tribute to those literary luminaries like Pemmaraju Venugopala Rao, Veluri Venkateswara Rao, Dr. BK Mohan, Drs. Ravi and Seshu Sarma, Phani Dokka, Suresh Kolichala, Bala Indurti, Professors Joyce B. Flueckiger, Velcheru Narayana Rao and many more who contributed and laid the foundation for the furtherance of the Telugu language and culture in a foreign land particularly in Atlanta, Georgia, USA”.