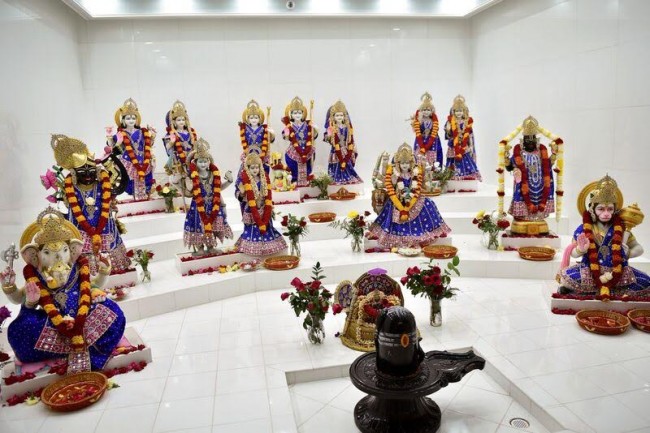 Atlanta, GA, May 31, 2017: The beautiful spring day of Friday, April 28, 2017 was indeed a red-letter day for the Sanatan Mandir as it celebrated the fulfillment of a long- held dream of a team of fiercely dedicated, committed and focused members, generous donors and volunteers in Atlanta,Georgia. Now the fruit in the form of an architectural jewel of a temple with a captivating shikhar is for all to see and admire. 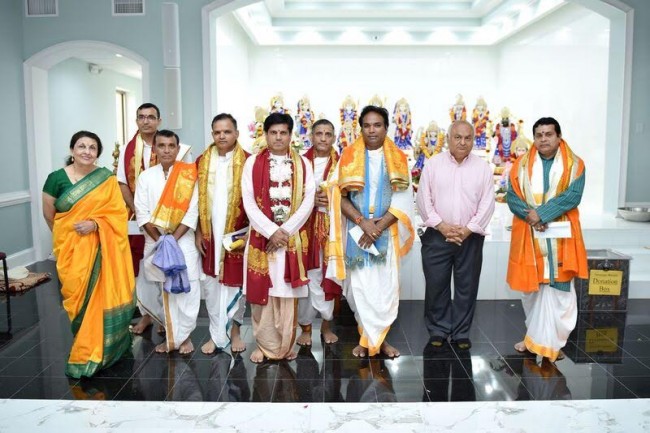 The celebrations commenced on the auspicious days of Akshaya Tritiya /Parshuram Jayanti and ended on Adi Shankara Jayanti. The elaborate ceremonies were meticulously performed by Sanatan mandir priest Acharya Pramod Padhiji, priests from temples inGeorgiaand other States and pooja and other rituals coordinator Praful Desai. The ceremonies started on Friday with Sarva Devata Anugya.  Acharya Padhiji initiated the ceremony but handed over the remaining ceremonies to Sri Venkata Krishna Sai Swarna, who has previously conducted 132 mandir inauguration ceremonies.

Aalaya vastupoojan ceremony and Dwar Pooja was done to sanctify the energy of the Mandir building and Mandir’s entrance doors respectively.

A tent with five Havan kunds was setup on the East side of the mandir complex to perform Laxmi/Ganapati/Vaastu/Navagraha Homam for propitiating Ganesha, Laxmi and the Navagrahas- the nine celestial bodies. The tent reverberated with chantings of Vedic hymns and mantras.The havan concluded with an aarti by over 600 devotees. Delicious Mahaprasad was enjoyed by all. 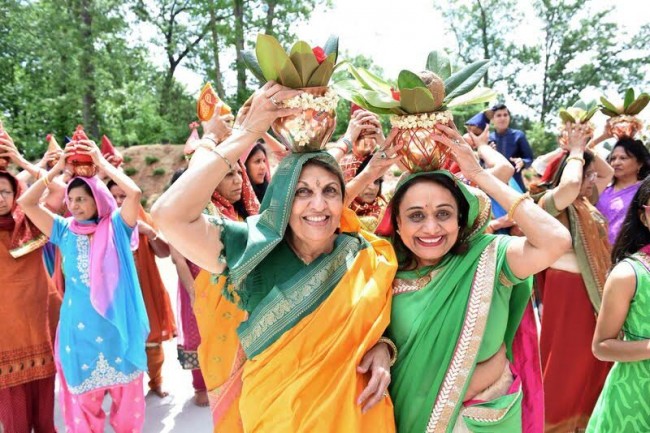 On Saturday all the deities of the mandir were infused with energy and life by invoking of specific mantras and by performing specific rituals. After Ganesh puja, yantras of each deity were placed on the pedestal of the respective murti to officially commence the Pranpratishtha and Shikhar Abhisheka Mahotsav.  Sarva Devata Vandan ceremony was obeisance to all the Deities: Lakshminarayanji; Shri Ramji; Laxmanji; Sitaji, Hanumanji; Ganeshji, Hanumanji, (Das Swaroop) Shrinathji, Shri Venkateshvar Swamiji, Shivalinga and the Navgrahas.  All the Mandir’s Trustees were provided with a Puja thali with which they did Annadhivaas, Jalaadhivaas, and Pushpaadhivaas- consecrating the Deities in grains, water and flowers. Two members from each Trustee’s family then did Bimba Snaan- bathing the image of their chosen Deity in a mirror. The priests then connected all the Deities by tying a sacred thread to each other, the Shivalinga. The actual infusion of Pran – Life force was done by performing Nyaas by three designated priests led by Sri Sai Swarna.

The Nyaas ceremony was performed behind curtains. Devata Shringaar followed the Nyaas ceremony. Each Deity was clothed in ornate fineries and embellished with ornaments and fresh Rose garlands. The lights in the Prayer hall were switched off as all the devotees waited with bated breath to look at the decorated Deities. They closed their eyes, and together recited mantras until the curtains parted and the dazzling, adorable Deities were unveiled! It was a magnificent sight to behold!  Delight, awe, praise, and veneration filled the air along with chants of beautiful hymns. The first Aarti was offered to the new Deities who were now infused with pran.

Since the Mandir observes Panchayatan system of worship envisioned by Sri Adi Shankaracharya, that is the worship of Shiva, Vishnu, Ganesh, Mata and Surya, the priests lit up the five yagnakunds in the large tent and performed the yagna. The devotees then offered oblations to the respective Deities as part of the Sarva Devata Havan.  All joined in reciting ‘Hanuman Chalisa’ and ‘Brahmamurali surarchita lingam’. An enthralling and reverential dance and music offering to the Deities by a few Dance Academies, Srividya and BalGokulam children, which was emceed by one of the Sanatan Mandir Trustees Suja Katarya and devotee Vibha Veeraghavelu was appreciated by all. It was heartening to see many children appreciating and imbibing the rich Indian culture and traditions through accompanying their parents to the celebrations. The ceremonies concluded with the first Daily evening aarti in the new Mandir. 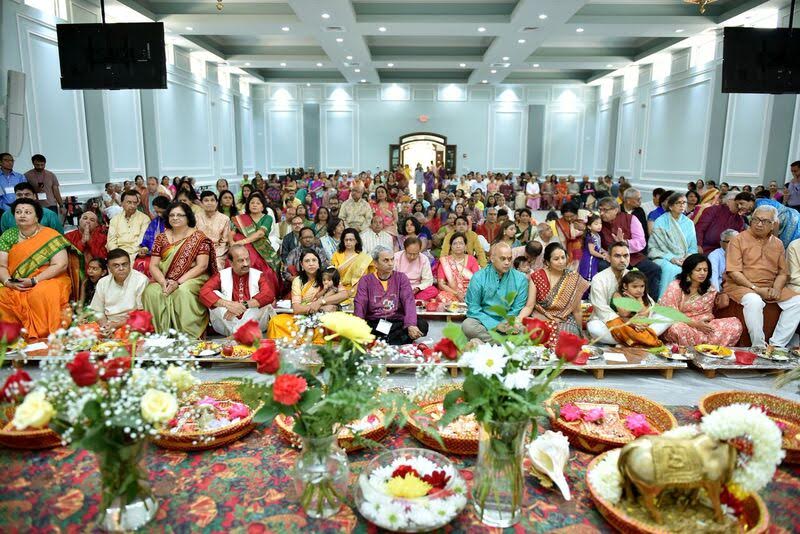 The much awaited ceremony on Sunday was the Shikhar kumbha abhisheka. All the devotees assembled in the Prayer hall. 108 colorful, sanctified and decorated Kalashes were carried on their heads by 108 ladies attired in colorful, traditional festive clothing circumambulated around the Mandir complex to sanctify the complex. The water in the Kalash was then offered to the Shiva-linga as an Abhisheka

The crowning moment came with the Shikhar Kumbha Abhisheka and Shikhar Alankaar puja. The Shikhar is considered the head of the Mandir, It is through the Shikhar that Divine energy enters the Mandir and permeates the Deities.  Dr. Anantha Kamath and wife Sucheta who had donated for this honor led the devotees towards the Shikhar. A special crane carried the priest and the Pradhan kalash Yajman to the top of the Shikhar. The Abhisheka was performed with loud chanting of “Hara Hara Mahadeva” and the gold Kumbha was garlanded. What a gorgeous sight to behold! The devotees then re-assembled in the prayer hall. A very rare chanting from all the Vedas – Rig, Yajur, Sama and Atharva magnified the uplifting spiritual vibrations. As is customary, all the priests were recognized and felicitated by the Trustees of the Mandir.

Sanatan Mandir’s President Nik Mainthia and Chairman Vir Nanda thanked all who supported Sanatan Mandir.They exhorted the devotees to join Dollar-a-day program  to help theTemple,to not only meet its maintenance and operational expenditure but also improve and add to the facilities and make it a throbbing and thrivingTemple.

In her vote of thanks the Mandir’s elated chairperson Devyani Desai thanked all the volunteers, devotees and trustees for participating in the grand celebrations and for the flawless, professional and courteous serving of mahaprasad ,managing the dining facility ,efficient parking , over all cleaning and tidiness. She noted that the beautiful  Temple also has  class rooms /dance studio /dining hall etc. that are available  for  rent and  for organizing different events in future .