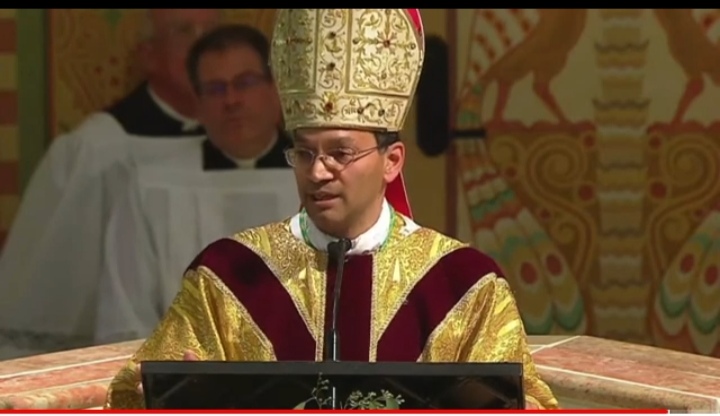 Atlanta, GA, June 9, 2022: Tuesday May 31, 2022, was a memorable day as the 13th bishop of the Roman Catholic Diocese of Columbus was installed in Columbus, Ohio.   Ever since Pope Francis in April 2022, announced the appointment of Rev. Fr. Earl K Fernandes as the Bishop elect of Columbus Ohio USA, the Indian diaspora and people in India have been waiting with bated breath for the consecration and installation of the first Indian American Bishop.  There has been a lot written about this first in the US.  What is of interest to people connected to the Indian subcontinent is the fact that the Toledo, OH born Bishop Fernandes,49, has Konkani Mangalore roots on his paternal side and Goa from his maternal side. His parents lived in Mumbai and both grandparents too, having migrated from Goa and Mangalore.

Cheers, applause and hymns dominated in the church of Saint Paul the Apostle in Westerville, as the Rev. Fr . Earl K. Fernandes was ordained and installed. The almost three-hour ceremony was a solemn and joyful one, with approximately 1,500 people in attendance.

During the homily and remarks from the Pope’s representative to the United States, Archbishop Christophe Pierre, Bishop Fernandes was appreciated and praised.  The bishop-elect sat in a gold and maroon robe, a zucchetto (a Bishop’s skull cap) already on his head when he entered the church. Archbishop Pierre noted Fernandes’ broad smile and said that he’ll need it for his new position, it’s “not at all a bad start.” Indeed, Fernandes was seen grinning, often widely, throughout the ceremony.

Before reading the letter from the Pope appointing Fernandes bishop, Pierre addressed the new Bishop, who was earlier an official at the Apostolic Nunciature, the offices of the pope’s representative to the United States, in Washington, D.C. Nuncio Pierre pointed out that, with three former bishops of Columbus in attendance — retired bishops James Griffin and Frederick Campbell and Bishop Robert Brennan, now bishop of the Diocese of Brooklyn — Fernandes would have “no shortage of counselors” in his new role.  Brennan, Pierre and Archbishop Dennis Schnurr, of the Archdiocese of Cincinnati, led the Mass together. Fernandes’ brother, Trevor Fernandes, a deacon in northwest Ohio, proclaimed the gospel and was by his brother’s side for much of the ceremony.

A choir sang many hymns and Bishop Fernandes himself distributed Holy Communion to those in attendance toward the end of the service, his trademark smile on his face as he did so.   The leader of the Archdiocese of Atlanta, Archbishop Gregory J. Hartmayer, gave the homily and called Fr. Fernandes a friend.  Hartmayer praised Bishop Fernandes’ parents: his late father Sydney and his mother, Thelma, who was watching the live stream from Toledo as she was too frail to travel for the ceremony.  “These two wonderful people have had the strongest influence on Father Earl’s life, especially his spiritual life,” Hartmayer said. “They were his mentors … his first teachers in the way of faith.” Hartmayer noted that Fernandes made history when he was ordained as a bishop, as he is the Catholic Church’s first Indian-American bishop.

Among the invited attendees were Ohio Gov. Mike DeWine and his wife Fran; Toledo Mayor Wade Kapszukiewicz, who was a classmate of Earl Fernandes’ at St. Francis de Sales High School in Toledo; interfaith leaders; about 35 bishops and more than 200 priests. Pope Francis, in a letter translated from Latin to English, described Fernandes as being “of strong faith and good character.”  After Pierre read the letter, he and Fernandes shook hands and embraced before Fernandes walked the aisle of the large church, holding the Pope’s decree above his head to show those in the pews. They gave him a standing ovation.

Rev Fr Earl’s father is Dr. Sidney Oswald Fernandes (1936-2019) was born in Bombay, graduated from Saint Xavier College in Mumbai and Topiwala Medical School and Nair Hospital in 1965.  Dr. Fernandes’ parents originally hail from Mangalore. Dr. Sidney Fernandes with his wife Thelma and two oldest sons moved to Toledo, Ohio in 1970. He did medical residencies at the Medical College of Ohio in family practice and internal medicine. He maintained a solo medical practice in Oregon, Ohio, for 40 years until retirement. Involved with the Mercy Health System, he was lovingly committed to Mercy Saint Charles Hospital, where he was Chief of Staff in 1988-89. Known for his exceptional care of his patients over the years, he is fondly remembered.