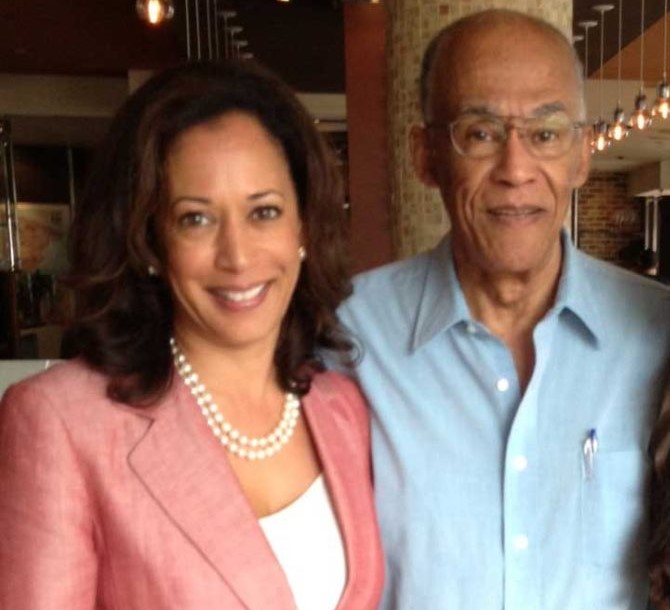 Washington, Feb 21 (IANS) US Democratic presidential candidate Senator Kamala Harris, who is of Indian and Jamaican descent, has been slammed by her father for saying that she smoked marijuana in her younger years and supports it becoming legalized.

Donald Harris, an economics professor at Stanford University, claimed his daughter was playing “identity politics” and added that she was harming her family’s Jamaican ancestors, Politico reported on Wednesday.

“My dear departed grandmothers … as well as my deceased parents, must be turning in their grave right now to see their family’s name, reputation and proud Jamaican identity being connected, in any way, jokingly or not with the fraudulent stereotype of a pot-smoking joy seeker and in the pursuit of identity politics,” he said in a statement to Kingston-based Jamaica Global Online.

“Speaking for myself and my immediate Jamaican family, we wish to categorically dissociate ourselves from this travesty.”

Donald Harris’ daughter, a first-term senator from California who launched her 2020 campaign last month, appeared on New York-based radio show “The Breakfast Club” earlier last week and was asked if she opposed the legalization of pot.

“That’s not true,” she told the show’s co-host. “And look, I joke about it – half joking – half my family is from Jamaica. Are you kidding me?”

Harris, whose mother is an Indian, said she smoked a joint in college. “I have… And I inhaled,” she added, a joking reference to former President Bill Clinton’s comment on the campaign trail in 1992 that he smoked marijuana but “didn’t inhale”.

Kamala Harris’ campaign made no comment on her father’s reaction.

It is now clear that Kamala Harris, the first Indian American and Black American candidate on a US presidential ticket, will be America’s next Vice President, capping a historic run for the nation’s second-highest office. Harris’ lightning fast political rise and her triumph marks a high point for women of colour in politics at an anxious time in American society. Harris, 55, is a California senator, the daughter of a Jamaican father and an Indian mother. She is also a former prosecutor whose grilling of Trump’s appointees and unflappable cool has transported her to Democratic Party stardom. Harris won her first election in 2003 and became San Francisco’s district attorney. In 2010, she became the first woman of colour to be elected California’s attorney general. Harris was elected to the US Senate in 2016. The historic nature of Harris’ candidacy has underlined her every stump speech, and Harris handled the pressure with a certain confidence that comes from years of tough questioning and tons of preparation. Surrounded by the unmistakable aura of a historic campaign, the Harris candidacy has had some remarkable moments since August. First came Harris’ introduction to America, during the Democratic National Convention. “There’s another woman, whose name isn’t known, whose story isn’t shared. Another woman whose shoulders I stand on. And that’s my mother.” “She’d say, ‘Well, what are you going to do about it?'” has become Harris’ favourite pull out on her mother Shyamala Gopalan, a woman who paved the way for Harris’ pathbreaking candidacy. Shyamala Gopalan came here from India at age 19 to pursue her dream of curing cancer. At the University of California Berkeley, she met Donald Harris who had come from Jamaica to study economics. “They fell in love in that most American way — while marching together for justice in the civil rights movement of the 1960s.” Harris’ father, in an essay, describes his elder child Kamala Harris as “ever the adventurous and assertive one”. Full report on our website. Photo: Book cover of ‘Kamala Harris: Rooted in Justice’ #kamalaharris #lotus