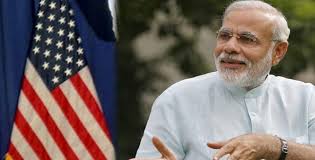 New Delhi/Washington, Sep 23 (IANS) Prime Minister Narendra Modi has a packed schedule of 35 engagements, including an address to the UN General Assembly and a much-anticipated summit meeting with US President Barack Obama, during his Sep 26-30 visit to the US.

Modi would be meeting the CEOs of Fortune 500 US companies, including Boeing, Pepsico, Google, General Electric and Goldman Sachs among others and also hold one-on-one meetings with some of them.

His visit to Washington, Sep 29-30, would also see a dinner date with President Obama on Sep 29.

Trade and investment, energy, science and technology, defence and security are expected to be the areas of focus during their talks. Both sides would seek to give much-needed impetus to the flagging bilateral relationship during the meeting.

This is Modi’s maiden visit to the US since becoming prime minister and it would also be his first interaction with Obama.

Modi has held successful diplomatic meetings with the leaders of China, Japan, and Australia besides a whole lot of diplomatic interactions with other countries so far. The US visit is being looked forward to as the US had slapped a ban on Modi’s entry in the aftermath of the 2002 Gujarat riots, in which over 1,000 people, mainly Muslims were killed while he was chief minister.

Early this year, the US sought a rapprochement with him when it became clear that Modi was set to become the leader of the country of 1.2 billion people.

To a question about the US’ earlier boycott of Modi, external affairs ministry spokesperson Syed Akbaruddin said that the prime minister “looks forward and not backward” in a relationship.

Modi is also to pay homage at the 9/11 memorial in New York and meet 300 members of the Indian American business community. He would also address a few thousand of the large Indian community at Madison Square.

His interactions in the US would be with the US political leaders, and administration, with the business community, civil society, with the US states and cities and the vibrant Indian diaspora, said Akbaruddin.

He said India expects “substantive outcome” from Modi’s visit to the US. While in Washington, Modi would also meet Vice President Joe Biden, Secretary of State John Kerry, Defence Secretary Chuck Hagel and House of Representatives Speaker John Boehner among others.

Modi’s address at the UN General Assembly is expected to address issues important to India, including expansion and reform of the UN Security Council, especially keeping in mind the 70th anniversary of the UN that falls in 2015 and on its peacekeeping operations. India is one of the largest contributors to the UN peacekeeping force.

Modi is also to meet members of the Sikh community while in New York.While the Indian American community is enthusiastic about welcoming Modi, a Sikh human rights group plans to indict him right when he is holding his Sep 30 summit with President Obama.

Rights group Sikhs For Justice (SFJ) has planned black flag rallies and a “Citizens’ Court” to try Modi for his alleged role in the 2002 Gujarat riots.

The indictment proceedings for “attacks on religious minorities in India” would be “conducted in a replica court room set up in the President’s Park right in the front of the White House”, and telecast live throughout the US, SFJ announced.

Seema Verma in the center of federal health contract controversy