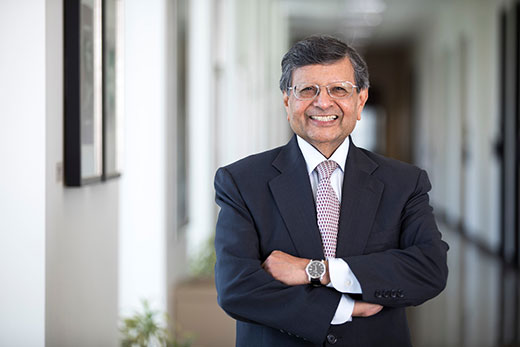 Atlanta, GA, May 9, 2019: This year’s Thomas Jefferson Award winner is more accustomed to giving than receiving. Professor Jagdish Sheth, the Charles H. Kellstadt Chair in Marketing, is the 2019 winner of an award that honors a faculty or staff member who has significantly enriched the intellectual and civic life of the Emory community.

Sheth has combined intelligent inquiry, entrepreneurship and philanthropic zeal to build a career that includes publishing more than 350 research papers and books in various areas of marketing, including consumer behavior and marketing for emerging markets. In addition, he serves on the boards of the Community Foundation of Greater Atlanta and the World Affairs Council of Atlanta, and he has been active advising international governments and policy makers including the U.S. Department of Transportation and the government of Singapore.

For Sheth, who has won a number of honors, the Jefferson Award holds particular meaning.

“This award is really special because it is selected by a committee of university-wide peers,” says Sheth. “Also, it is special because the Jefferson Award reinforces that the mission of an academic, which is to unlock the potential of others.”

Helping others find that potential is a passion of Sheth’s and has fueled his research and teaching. Erika James, the John H. Harland Dean of Goizueta Business School, and seven others across campus detailed the breath of Sheth’s work and activities in a six-page nomination letter. The impact was not lost on the judges, all of whom are prior award winners.

“The committee was deeply impressed by the local, regional and international contributions Professor Sheth has made through his distinguished career at Emory,” says Carol J. Rowland Hogue, Jules & Uldeen Terry Professor of Maternal and Child Health, professor of epidemiology and director of the Women’s and Children’s Center.

Adds Hogue, the 2017 Jefferson Award recipient, “He was nominated by leaders all across Emory University for his ‘demonstrated energy, curiosity, continuous learning, advancing scholarship, generous mentorship and development, academic and social integrity, unbounded generosity, and selfless attention to personal and community development in the extended Emory global environment’ over the span of his 25-year career at Emory.”

The personal nature of Sheth’s commitment to students also impressed the committee. “Through his compelling teaching and mentorship, Professor Sheth’s passion for preparing future generations of scholars and leaders is broadly known throughout Emory and beyond,” says the Religion Department’s Bobbi Patterson, 2015 award winner. “As a Jefferson Award winner, we celebrate his creative and widely-recognized scholarship, service on countless Emory committees, the development of strong international relationships, and generous creation of awards for alums and faculty.”

For many across campus, Sheth’s generosity is well-known.

“Jagdish Sheth is a visionary leader and beloved mentor, colleague, teacher and supporter of many important initiatives at Emory.  He and his wife, Madhu Sheth, and the Sheth Family Foundation, have been most generous in so many ways and we have become a better institution and better informed as individuals  as a result,” notes Holli A. Semetko, Asa Griggs Candler Professor of Media & International Affairs, who served as Emory’s vice provost for international affairs and director of The Halle Institute for Global Learning from 2003 to 2013.

“For example, with the Sheth Lecture in Indian Studies, Emory and Atlanta communities have hosted amazingly talented individuals in film, literature, politics, business, religion, spirituality and more,” says Semetko. “With Jag and Madhu’s support for the South Asia Collection at the Carlos Museum and with the gift of volumes of India’s Supreme Court decisions to Emory’s Law School library, we see the gift of knowledge generate benefits across Emory and the larger Atlanta community, and more.”

“Jag Sheth is an incredible university leader who inspires us all to expand our global vision and act boldly to grasp opportunities,” Curran says. “His persistent vision is enacted through persuasion, incentives, education and offering prestigious recognition of faculty, colleagues and alumni. He has been and remains a model global faculty member.”

Sheth is also known to many as friend.

“He is the full package — top scholar, highly respected in global public and private sectors, leader in pedagogy and education institution governance, generous with his advice and mentorship, highly respected by world leaders, and a strong servant to Emory University and each institution he has engaged,” says fellow faculty member Benn Konsynski, the George S. Craft Professor in Information Systems & Operations Management at Goizueta. “I am proud to call him a friend.”

As the 57th recipient of the Jefferson Award, Sheth is the first faculty member from the Goizueta community to win the award — a fact that adds even more heft to the honor.

“Anything that is unprecedented always feels like another major milestone in life’s journey,” notes Sheth, who turned 80 last year. “It means that the business school is an integral part of the university. It also means that the ‘One Emory’ vision of the new leadership is successfully implemented with respect to diverse faculty talent and expertise. Most importantly, this award will pave the way for others to be recognized for their talent and dedication to Emory and scholarship.”