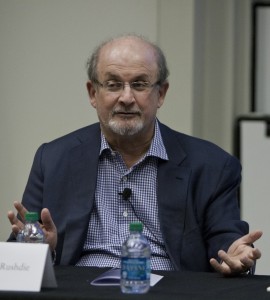 Atlanta, GA: “India is in the middle of a cultural emergency. And it is most worrying that it doesn’t worry people,” said award winning author Salman Rushdie during a Q & A session with Prof. Paul Courtright at Emory University’s India Summit at Goizueta Business School on February 17.

He said the casual attacks on the arts, be it paintings, literature or cinema, and the inertia of the public that arouses very little outrage, is very damaging to Indian society. He added that the government usually took the side of the attackers because of the way the Indian laws are written. 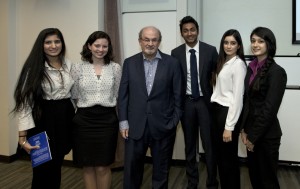 Salman Rushdie with the student executive committee at the summit. Photos by Wilford Harewood.

Fortunately, he said, the wonderful thing about the information technology age is that it is hard to ban a book, when they can be downloaded. As an example, he cited Wendy Doniger’s controversial book, “The Hindus: An Alternative History” as being #11 on Amazon.com.

Literature, to him, has been about pushing boundaries, breaking the rules. It is about sarcasm and satire, and not always about positive things. He said writers are not listened to anymore. “But a few writers have a voice, and they use the platform to say what needs to be said,” he said.

Rushdie had a more positive outlook on contemporary Indian literature. As a young writer, he was not convinced that English would remain a literary language in India. However, India has witnessed, “an extraordinary explosion of writing in all genres of English, from the literary to the popular, including 50 shades of Chetan Bhagat,” he said.

He said Indian writers no longer felt the need to write (only) about India. Earlier, there was an unspoken pressure on writers to write about the country.

He said English is a very malleable language, giving rise to a whole range of Englishes around the world, including India.