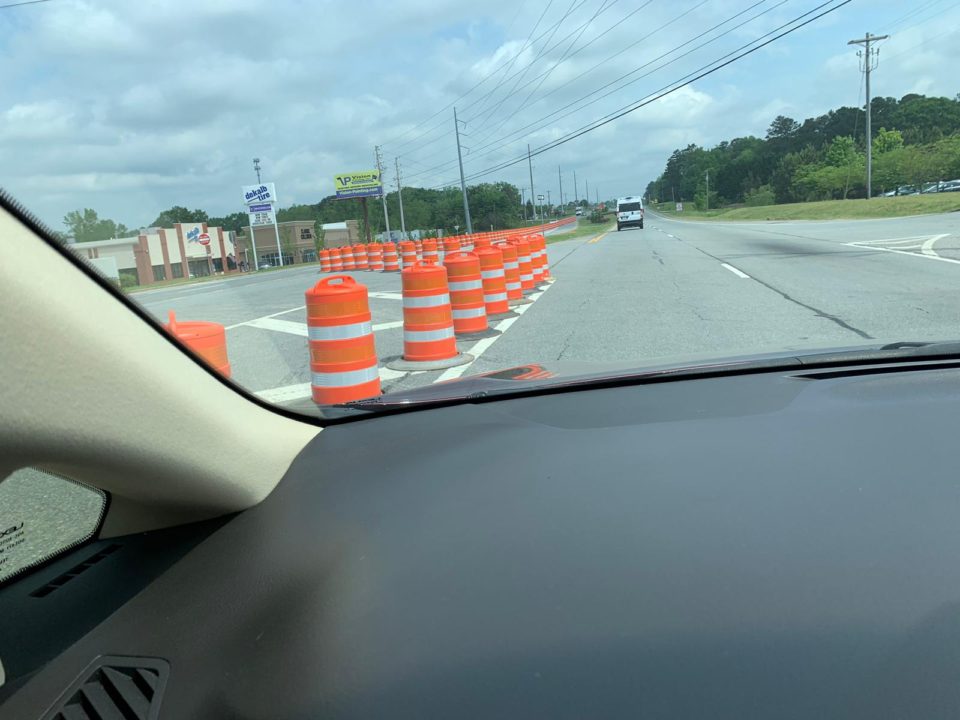 Atlanta, GA, May 9, 2019: Georgia Department of Transportation will temporarily close the left turn lane at the intersection of State Route 141 (Peachtree Parkway) and Callaway Court. Barrels have been placed to block the left turn and GDOT will continue to monitor the area for the trial month.

The action is the result of a conclusion from a GDOT traffic engineering report for the intersection, undertaken after a fatal wreck killed Forsyth County resident, Sriram Sundaram, 42, in January. The report concluded that the intersection fails to meet warrant for installation of a traffic signal, which requires maintaining 75-150 vehicles for eight hours.

An Intersection Control Evaluation (ICE) report to resolve “crossing conflicts” between left turn movements at the intersection, considered various alternative solutions apart from a traffic signal including partial/full median closure and a RCUT (Restricted Crossing U-Turn), which is an intersection design that restricts left turns at an intersection, but allows the same movement downstream via a U-turn.

“While an RCUT reduces the crossover conflicts from side streets/driveways, it does not eliminate all crossing conflicts such as the fatality that occurred. A fully-closed median will eliminate all crossing conflicts; however, business at the intersection will be negatively impacted,” the report states. “Instead, a partially closed median that closes the southbound left turn lane into Callaway Court is proposed to improve safety by eliminating angle crashes; therefore, a right in, right out driveway at Callaway is strongly recommended” states the report.

Raising safety concerns following the fatality on Jan 21st, when Sundaram lost his life attempting left turn at the intersection, residents in the area mobilized a petition with thousands of signatures. Ponni Chinnamuthu, the author of the petition had requested for traffic light/signal or a closed median or a no left turn signal, whichever will be appropriate. The group brought attention to the fact that the turn leads to popular Cherians International Fresh Market, which is widely used by the community. Following many informal meetings with GDOT officials, eight residents of the area spoke during a Forsyth County Board of Commissioners meeting about the need to improve safety measures at the intersection.

“This is a perfect example of collective impact. Concerned residents, law and enforcement officials, elected officials, government administrators, business owners and print media came together to work towards a solution that keeps safety of residents in the forefront. When local government joins hands with local residents there is synergy in the positive outcome. We are all grateful for each and everyone’s efforts and input to create safety measures. Sriram Sundaram’s spirit guided us towards this outcome,” said Dr. Nazeera Dawood, who spearheaded the efforts to improve safety at the intersection.