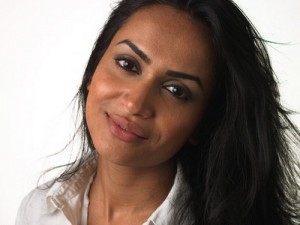 Nandita Chandra , actor, (originally from Hyderabad, India) recently bagged first place at the ‘ Midtown International Theatre Festival’ where she won the Outstanding Actress Award for the play I-pod. She also won ‘Best Solo Performance’ for the same play  at the Network One Act Festival.

I-Pod is the story of a glamorous New York City artist who pretends to be an environmentalist to win a Guggenheim grant.

2013 United Solo Theatre Festival is the world’s largest solo theatre festival held at the Theatre Row in the heart of the New York City theatre district on 42nd Street. The Festival presents over 100 productions this year! Featured local and international solo shows represent 6 continents and 23 countries, and fall into a vast selection of categories, ranging from drama, storytelling, puppetry, and multimedia shows to stand- up, magic, improv, dance, and musical.