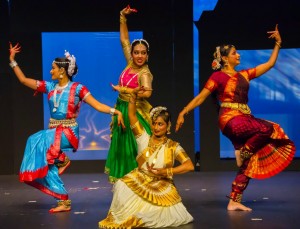 Aakriti, which means image or shape in Sanskrit, was conceived and directed by Anupa Thakurta, founder of Deeksha, who wanted to choreograph Bharatnaytam using traditional and experimental music to universally appeal to a wider audience and dispel the notion that Indian classical dance cannot be exciting, pulsating or eclectic. She met the challenge with great aplomb, without diluting the art form. 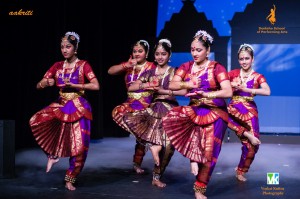 The event was a fundraiser for Baal Dan, a non-profit that helps street children, orphans and impoverished children inIndiathrough grants, feeding programs, supplies and scholarships.

Fifteen items were presented by the students of Deeksha, their guru Anupa, and some fine local dancing talent. Months of practice, hard work and dedication were evident in the performances. Every artist, even the little ones, exuded grace, poise and confidence as the program moved from an invocation to Lord Shiva to the synergy of the masculine and the feminine forms of Ardhanarishwara, to the Dhanashree Tillana to an ode to the elements to Deeksha, the tree of knowledge, amongst other items. The two aspects of Bharatnatyam- nrittya that focuses on rhythm and natya, depictions of mythological stories were in full flow. More than a dozen dancers brought to life the mythical tales of Shiva-Parvati, Ganesha, Muruga andKrishna. 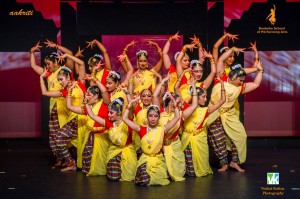 A highlight of the afternoon was ‘Nirbhaya, the uprising’, which used dance effectively to convey a strong social message. Nirbhaya showcased violence against women and the call for all women to rise (Durga rising) and take back what is rightfully theirs- their dignity of the freedom to choose.

Another spectacular item was ‘Nrityasangam’, a juxtaposition of four classical dance styles- Odissi, Bharatnatyam, Kathak and Mohiniyattam. Innovatively choreographed and ably performed by artistes Payel De (Odissi), Mallika Halder (Kathak), Rakhi Rajeev (Mohiniyattam) and Anupa Thakurta (Bharatnatyam), the item was a treat to watch as each dancer interpreted a unique composition in her own dance style.

The finale was a rock reprise to Dhanashree Tillana, where the traditional musical ensemble of mridangam, violin, flute and the veena was replaced with drums, keyboards and guitars. The piece showcased the power of dance to transcend from traditional to contemporary, with ease.

Padmaja Kelam, founder and director of Kalaivani Dance andMusicAcademywas invited to speak about Bharatnatyam. “Dance means movement of body to music. Classical arts give us peace, hope and contentment,” she said. “No art form is bigger or better than the other, as long as we are committed to it.” Providing a brief history of Bharatnatyam she said techniques have now changed, and it is disheartening to see a lot of people take the easier way out. She said, learning an art form takes commitment and time, but the end result is worth the effort. “Most of the Bollywood actresses are trained in classical art form,” she added.

“Please support the arts. It is our duty to continue the 5000-year-old art forms and pass them on to the next generations,” she said.

Playright and film maker Dr Raktim Sen, who was responsible for the production design including lights, sound, digitization and remixing, did a spectacular job of the project. He said it took him as much time as the rehearsals to put the effects together, and the effort and commitment showed on stage.

Archith Seshadri did a great job as the presenter. The script and narration was by Shankar Sengupta. Abir Thakurta, who was in charge of production management, made sure everything progressed smoothly during the show.

The 110 minutes of dancing with traditions was certainly a celebration of footwork and emotions, rhythm and music, unique choreography and haunting storytelling. That it was all for a good cause, made it an even more memorable afternoon for those who were part of the sold-out show.