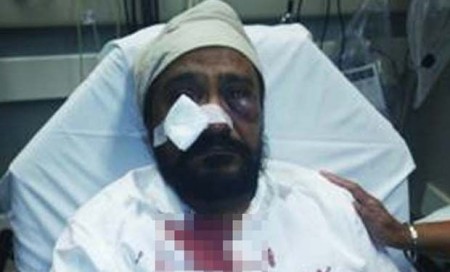 Washington, Sep 10 (IANS) Just days before the US commemorates the September 11 terrorist attacks, a Sikh-American has been hospitalized after an assailant attacked him in Chicago, dubbing him a “terrorist”.

The racially-motivated attack occurred when Inderjit Singh Mukker was on his way to a grocery store on Tuesday night, The Washington Post quoted Sikh Coalition as saying on Thursday.

A man in a car passing by his vehicle allegedly started abusing Mukker by calling him “Terrorist!” and “Bin Laden!” and yelled “Go back to your country!”.

After continuous tailgating, Mukker decided to pull over the car. The assailant also stopped his vehicle, charged towards Mukker and threw several punches at him.

Fifty-three-year-old Mukker was left unconscious and was later taken to a hospital. He was treated for a fractured cheekbone, bruising and blood loss. He got six stitches for the lacerations on his face.

Police said the alleged assailant has been arrested.

“No American should be afraid to practice their faith in our country,” Mukker said in a statement on Wednesday.

“I am thankful for the swift response of authorities to apprehend the individual, but without this being fully investigated as a hate crime, we risk ignoring the horrific pattern of intolerance, abuse and violence that Sikhs and other minority communities in this country continue to face,” he added.