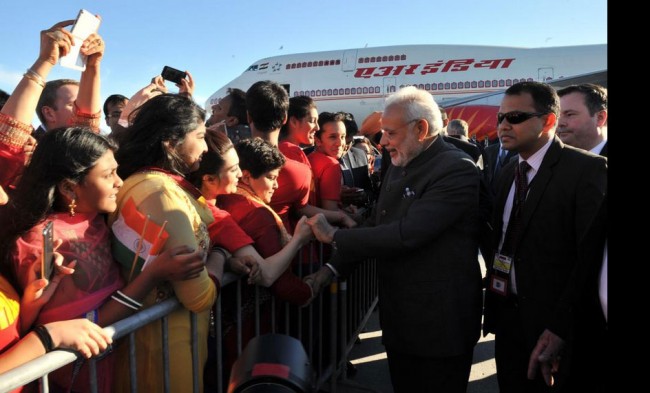 Ottawa, April 15 (IANS) The Indo-Canadian community is set to give a rock star like welcome to Indian Prime Minister Narendra Modi who landed here on Tuesday for his three-day visit.

Modi was welcomed by Canadian Multiculturalism Minister Jason Kenney and Indian High Commissioner Vishnu Prakash and a large number of Indo-Canadian leaders on his arrival at Ottawa airport from Germany.

There is a palpable buzz in Canada about Modi’s visit as he is the first Indian prime minister to come here in 42 years since Indira Gandhi’s visit in 1973. Canadian prime ministers have, however, been visiting India quite regularly.

Modi arrived in Canadian capital Ottawa after completing his France and Germany sojourn.

Bilateral trade and investment top the agenda of Modi’s talks with his Canadian counterpart Stephen Harper and CEOs of major Canadian companies.

In particular, Modi is wooing Canadian pension funds which hold over $600 billion. A deal may be clinched for first Uranium supplies from Canada’s Cameco under the nuclear deal signed by the two countries in 2010.

Though a breakthrough on the proposed free trade agreement is unlikely, the process is going to get the impetus during Modi’s talks with Canadian leaders.

Both sides showed some urgency to clinch the free trade accord as they had proposed to triple their bilateral trade to $15 billion by 2015, but both the targets have eluded them as Canada is reluctant on giving free access to Indian temporary workers and visitors and India is also wary of giving unhindered access to Canadian goods.

The bilateral trade between India and Canada is still stuck in the region of $6 billion, much lower than Canada’s trade of over $60 billion with China.

In fact, India accounts for just one percent of Canada’s foreign trade, with fertiliser, iron ore, wood, lentils and canola oil among its major export items to India.

With Modi wooing investment for India’s infrastructure and making a pitch for his Make In India programme, both countries are likely to fast-track ratification of the investment treaty signed in 2012 to give safeguards to investors against unfair treatment.

Modi will impress upon Canadian investors about his government’s agenda to open more sectors to foreign investment. There is also buzz about an announcement by Modi for visa on arrival for Canadians.

Apart from official discussions, Modi’s engagements with the 1.2 million-strong Indo-Canadian community include a Madison Square Garden-like ‘concert’ at Toronto’s Ricoh Coliseum with a full house of 10,000.

The newly formed National Alliance of Indo-Canadians (NAIC) is organising the event in which Canadian Prime Minister Stephen Harper will also speak.

After his Toronto engagements, Modi will travel to Vancouver where he will visit the oldest Ross Street Sikh temple. He will also visit the Laxmi Narayan Temple in Vancouver’s neighbour city of Surrey which is home to the largest concentration of Indians in Canada.

Giving a typical Bollywood welcome to Modi in Toronto, Ottawa and Vancouver, choreographer Shiamak Davar’s troupe will perform in the three cities.

Modi’s three-day visit ends with a dinner with the host PM in Vancouver.