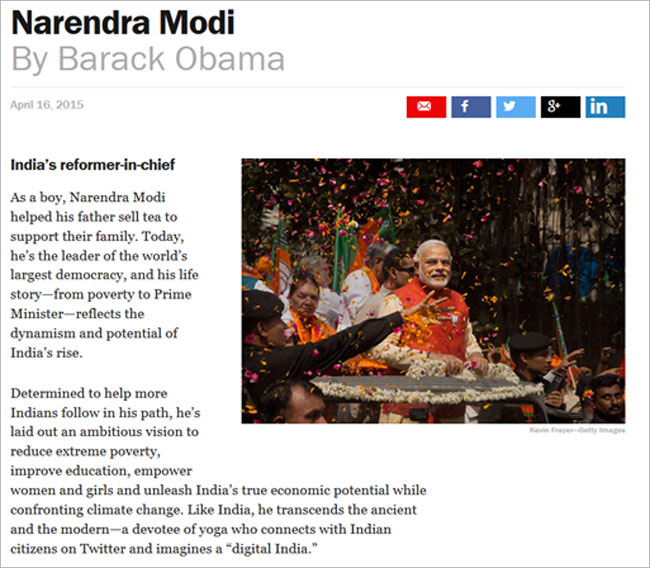 New Delhi, April 16 (IANS) “As a boy, Narendra Modi helped his father sell tea to support their family. Today, he is the leader of the world’s largest democracy, and his life story – from poverty to prime minister – reflects the dynamism and potential of India’s rise.”

This is how US President Barack Obama begins his write-up on Prime Minister Narendra Modi, who figures in TIME magazine’s 100 most influential people.

“Like India, he transcends the ancient and the modern – a devotee of yoga who connects with Indian citizens on Twitter and imagines a ‘digital India’.”

Reflecting on Modi’s visit to Washington last September, Obama writes, referring to him as “Narendra”: “When he came to Washington, Narendra and I visited the memorial to Dr Martin Luther King Jr.”

“We reflected on the teachings of King and Gandhi and how the diversity of backgrounds and faiths in our countries is a strength we have to protect. Prime Minister Modi recognises that more than 1 billion Indians living and succeeding together can be an inspiring model for the world.”