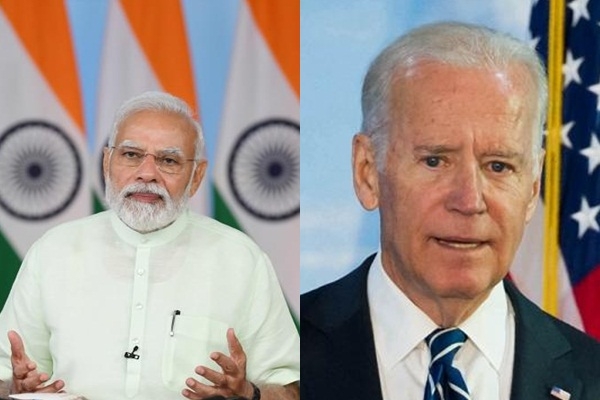 New York, April 10 (IANS) US President Joe Biden will discuss with Prime Minister Narendra Modi the Russian invasion of Ukraine when they hold a virtual summit just before the diplomatic and defence leaders of the two countries meet for their 2+2 meeting, the White House announced on Sunday.

While the relations between the two largest democracies have been growing at an unprecedented pace, they have been at odds over the Russian invasion of Ukraine with India trying to stay neutral to the consternation of the US.

The US has been trying to persuade India to join it in taking a harder line against Russia.

Biden’s Spokesperson Jen Psaki said: “President Biden will continue our close consultations on the consequences of Russia’s brutal war against Ukraine and mitigating its destabilizing impact on global food supply and commodity markets.”

External Affairs Minister S. Jaishankar and Defence Minister Rajnath Singh are to hold the 2+2 Ministerial Dialogue with Secretary of State Antony Blinken and Defence Secretary Lloyd Austin to discuss a range of issues, bilateral and global, on Monday.

Amid the differences between the two countries on Ukraine, the mention of “mitigating” the invasion’s impact on global food supply could open the way for cooperation between India and the US to help countries facing a crisis from the rising prices and shortages of wheat.

India has a huge stockpile of wheat — estimated at 100 million tonnes, far beyond its immediate safety net requirements — that could be deployed to help countries facing a food crisis.

Psaki said that further deepening ties “between our governments, economies, and our people”, will be on the summit agenda.

She indicated that the Indo-Pacific will feature prominently in their conversation.

They will discuss “upholding a free, open, rules-based international order to bolster security, democracy, and prosperity in the Indo-Pacific”, she said.

They “will advance ongoing conversations about the development of an Indo-Pacific Economic Framework and delivering high-quality infrastructure”, she added.

They will also discuss “cooperation on a range of issues including ending the Covid-19 pandemic, countering the climate crisis, strengthening the global economy”, she added.

“President Biden believes our partnership with India is one of the most important relationships we have in the world,” she said on Friday at her briefing in Washington.

The Pentagon announced that Singh and Austin will meet on Monday morning before the 2+2 meeting.

“Since its inception in 2018, the 2+2 Ministerial has allowed the US and India to continue to work towards building an advanced comprehensive defence partnership that we think is poised very well to meet the challenges of the 21st century,” he added.

The virtual meeting will enable both sides to continue their regular and high-level engagement aimed at further strengthening the bilateral Comprehensive Global Strategic Partnership.

Earlier on Sunday, Indian Defence Minister Rajnath Singh said that he would be leaving New Delhi on Sunday night for a visit to the US from April 10 to April 15.

“I look forward to attend the Fourth India-US 2+2 Ministerial Dialogue in Washington DC. Also, I shall be visiting INDOPACOM headquarters in Hawai, during this visit,” he said.

Singh further stated the visit to the US will give him an opportunity to hold talks with his counterparts to deepen the India-US strategic partnership.

He had stated that he is looking forward to fruitful interactions during the visit.