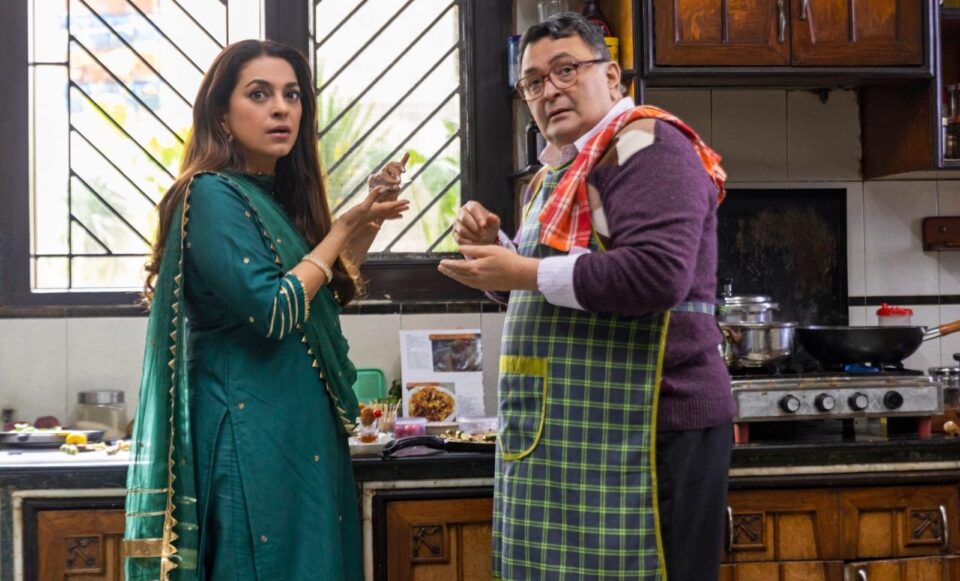 One of the characters in the film states, “Baat baat pe senti ho jaate hain”. That is exactly what you experience when you see ‘Sharmaji Namkeen’ — Rishi Kapoor’s posthumous film.

There is nothing new, unusual, or flamboyant about this slice-of-life film, which narrates the tale of Brij Gopal Sharma, a widower with two grown-up sons who finds himself at the crossroads of life when he is laid off from work.

The film begins with a function in the office of Madhuban Home Appliances, where Sharmaji is felicitated for being a sincere and dedicated worker. His boss, Mr Sikka, advises him to enjoy life and have fun. But this is exactly what he cannot do.

After staying at home for four months and 13 days, getting on the nerves of his sons, Rinku and Vincy, Mr Sharma feels the itch to find a purpose in his life.

Being a widower, Sharmaji has been cooking at home. Also, at times, he has been volunteering at religious functions in his locality. So, at the behest of his friend, Mr Chaddha (Satish Kaushik), he takes up a cooking assignment for Mrs Gulati’s (Sheeba Chaddha) kitty party.

Since then, Mr Sharma is the most sought-after cook within Mrs Gulati’s circle of merry friends. How his life evolves thereafter forms the crux of the narrative.

‘Sharmaji Namkeen’ is a lighthearted film, yet it is not easy to sit through, for it is unusually mounted, with two actors playing the same role.

The film sorely lacks drama, interesting twists, and an element of freshness. It trudges along on an even keel. Nevertheless, it is an uncompromising depiction of “the show must go on” attitude to life, while it imbues the screenplay with dignity.

Rishi Kapoor and Paresh Rawal are effortless in their performance as Mr B.G. Sharma. They are aptly supported by Suhail Nayyar and Taaruk Raina as Sharma’s sons, Rinku and Vincy. They both are sincere despite their frivolous bro-banter appearing forced and amateurishly staged.

Juhi Chawla as Mrs Gulati’s friend Veena Manchanda, who forms a bond with Sharma, adds a cute layer to the narrative, but does not elevate the story.

Parmeet Sethi as Veena’s brother-in-law, Robbie, the Mayor of Delhi, is charming but does not add much heft to the role.

The rest of the cast in supporting roles are mostly natural, but at times they are dramatic and over-the-top. They have their moments of on-screen glory.

Mounted with mediocre production values the film will certainly have a limited appeal. Those who can make it through are going to cherish the film for Rishi Kapoor and the film’s core values.