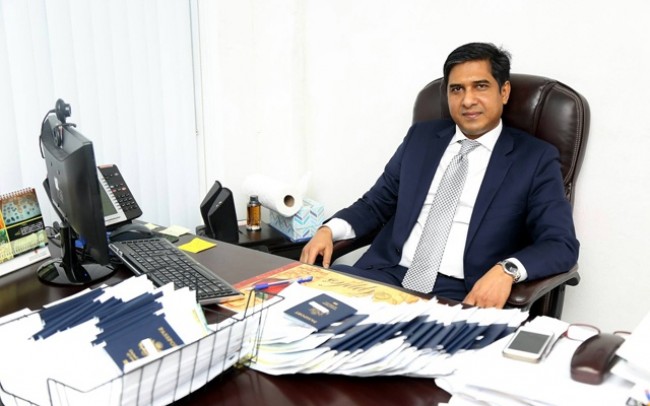 New York, June 13 (IANS) A high-ranking Bangladeshi diplomat based in New York, accused of forcing his servant to work for up to 18 hours a day without pay, was charged on Monday with labour trafficking and assault, CNN reported.

For his bail, which was set at $50,000 bond or $25,000 cash, Bangladesh’s Consul General in New York Shameem Ahsan, other colleagues and relatives arranged a $50,000 bond. But it will take a day for him to be released, bdnews24 reported.

Shahedul, 45, brought another Bangladeshi, Mohammed Amin, to the United States between 2012 and 2013 to work for his family in Queens as a household helper, an arrangement common among South Asian diplomats.

“Soon after Mr Amin’s arrival, the defendant allegedly took his passport and required the man to work 18 hours a day… Even though Mr Amin had a contract which outlines his compensation, it is alleged he was never paid for his work,” Queens District Attorney Richard Brown said in a statement.

“If the victim disobeyed the defendant’s orders, Mr Amin was allegedly physically assaulted by the defendant, who either struck him with his hand or sometimes with a wooden shoe,” it said.

Shahedul has limited diplomatic immunity and was ordered to surrender his passport when he appeared before Queens Supreme Court Justice Daniel Lewis, Brown said in a statement.

The Queens grand jury hit Shahedul with a 33-count indictment on Monday that includes labor trafficking, assault and other charges. He was arraigned later Monday. His next court date is June 28.

A spokesman for the Bangladesh embassy in Washington said it believed Amin had filed the case in bad faith and the allegations were “fabricated” and “baseless”.

Shahedul had reportedly decided to cancel Amin’s contract and was preparing to send him back to Bangladesh.

Bangladesh Ministry of Foreign Affairs spokesperson Khaleda Begum confirmed that their embassy in Washington and the Bangladesh Foreign Ministry have been officially notified of Shahedul’s arrest and the charges against him.

According to the charges, Amin’s only form of income came from tips from guests at parties and a “miniscule” amount of money Shahedul sent to Amin’s family in Bangladesh.

On several occasions when Amin sought to leave, Shahedul hit him and threatened to harm his mother and young son in Bangladesh, according to the statement.

On occasions, Shahedul also stated that he would have Amin’s college-age daughter “shamed” if he did not continue to work as his servant, the statement said. The statement did not make clear what Shahedul meant by shaming.

The statement also said that in 2014, shortly after an Indian diplomat in New York was charged with labour trafficking, Shahedul wrote a cheque for Amin’s cash-tip earnings that the latter then had to deposit in a bank account to create the appearance of a paycheque.

“The long list of 33 charges in the indictment is a clear indication of the shocking depth of the deprivation and abuse allegedly meted out by this diplomat against his helpless domestic worker,” said Phil Robertson, Deputy Asia Director, Human Rights Watch, in a statement.

“Bangladesh should make an example of this diplomat by publicly washing their hands of him, and ensuring this never happens again.”

In a similar case, in late 2013, Devyani Khobragade, who was India’s Deputy Consul General in New York, was arrested and subsequently accused of visa fraud and forcing her housekeeper and nanny to work 100-hour weeks for just over $1 an hour.

Khobragade’s arrest and strip search provoked outrage in India and caused a major diplomatic rift between the US and India. The charges against her were dismissed because she had diplomatic immunity. After she left the United States, a New York grand jury later issued a new indictment for visa fraud.