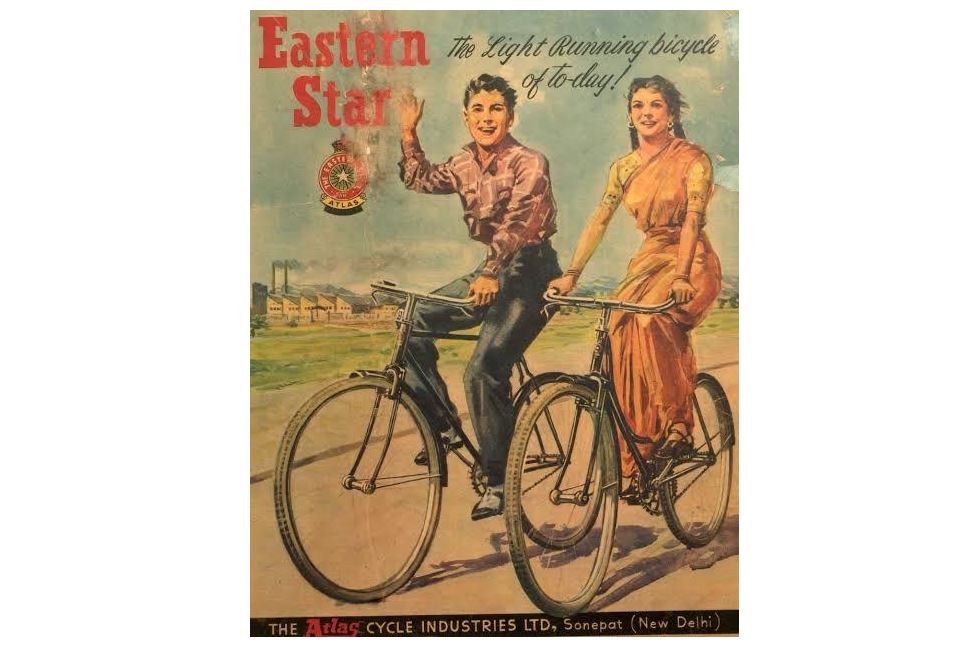 Just as Rafi saab’s “Yeh cycle, ka chakkar, kabhie aage, kabhie peeche” evokes sweet nostalgia, so do bicycles themselves. And in India, the brand Atlas is but synonymous with bicycles. Much like Majrooh Sultanpuri’s lyrics in Yeh cycle,..the iconic company which was well ahead of its competitors at one time, is now, a little left behind.

Atlas Cycles closed operations at its last manufacturing unit in Sahibabad, near Delhi, citing lack of funds to run operations of the factory on June 3, 2020, the day observed as World Bicycle Day. However, company’s CEO NP Singh Rana, in his conversation with NRI Pulse said that the closure is only temporary. CEO Rana walked down the memory lane, reminding us that Atlas was much more than a bicycle to India, and in fact, part of parcel of everyday life.

Even as we wonder about the role of a bicycle in today’s fast paced world, the heartwarming tale of 15-year-old Jyoti Kumari Paswan, who pedaled close to 1,200 km for eight days with her ailing father riding on the back, resurrects our beliefs in the basics. One of Rana’s favorite Atlas stories, Jyothi, he said was a migrant worker who was forced to leave Delhi during the COVID lockdown. Jyothi had used up the Rs. 2000 (apprx $27) she had to buy a used bicycle and wheeled for 11 days from Sikandarpur in Haryana to Darbhanga in Bihar. The cycle was Atlas.

Just as the journey of a thousand miles begins with one step, as Lao Tzu phrases it, founder Janki Das Kapur initiated the distinctive brand in a modest tin shed in 1951 in Sonepat, Haryana, about 40 km from Delhi. Its humble beginning notwithstanding, Atlas quickly established itself as a leading brand, moving to a 25-acre factory complex from the tin-shed in a record 12 months, rolling out 12,000 cycles in its first year of operation! The journey of the thousand miles had only begun.

Atlas was ready to spread its wings far and wide, shipping its very first overseas consignment in 1958. In 1965, Atlas emerged as India’s largest cycle manufacturer. Some of its notable recognitions along the way include Italy’s Gold Mercury International Award, the FICCI Award for ‘Best Industrial Relations’ and the EEPC Award for export excellence. Atlas introduced the ‘Rebel’ model marketed as an adventure bike and then came ‘Concorde’ with 10 gears. Indian streets sizzled with the first racing cycles when Atlas released the product in 1978. In 1982, Atlas became the official supplier of bicycles to the IXth Asiad at Delhi.

Atlas Cycles had emerged as one of the largest bicycle manufacturers in India with the capacity to produce 4 million bicycles annually. The first wave of trouble swept across in the early 2000s with family feuds. Atlas Cycles faced losses and had to close down its Malanpur manufacturing unit in 2014 followed by its Sonepat unit in 2018 due to financial constraints. Economic turbulence slammed the brakes on Atlas’s ride as the company was forced to shut down its last manufacturing unit in Sahibabad in June 2020. The combined manufacturing capacity stood at 40 lakh cycles per annum even in 2020.

Bollywood’s romance with the bicycles is evident all through the ages, in evergreen Pukarta Chala hun main, Jaanu Meri Jaan, withthe three Khans of the industry in tow – Salman in Kick, Aamir in PK, or Shah Rukh in Ra.One, and more recently, Ranbir in Barfi or Ranveer in Dil Dhadakne Do. Cycle was at the heart of superhit Jo Jeeta Wohi Sikandar, which climaxed with a cycle race!

Sunil Shetty, Sania Mirza, Olympic gold medalist Abhinav Bindra, Govinda were among celebrities endorsed Atlas as brand ambassadors. Salman Khan and Sangeeta Bijlani were pictured with Atlas bikes. Kiran Bedi once visited the premises. Atlas ads also hold the unique distinction of featuring women clad in saris riding their bikes, back in 1961. Atlas addressed misconceptions about women not being able to ride with a sari and being cast only in stereotypical roles of domestic life.

“This bicycle was at that time, at the peak of its glory, and we were number one – not only in India but we were number one in the world,” noted Rana, who happened to join Atlas in 1982. Recalling the times, he noted that much of the Indian manufacturers and Chinese drew inspiration from the brand, adding that bicycle plants were set up in Rwanda, Zambia, Tanzania, Bangladesh, and Sri Lanka with the technical know-how from Atlas. “We topped the charts, across the globe.”

“Bicycle is my first love,” said Rana as he fondly recollected the fancy collapsible bicycle he gifted his daughter, Atlanta resident, Nidhi Rana Kharbanda. Nidhi was quick to add that that she in fact owned the coolest bike amongst her friends, only she had to demo the collapsible part so many times, that her dad eventually had to disable the feature. As sadly as that story ended, it is the design and development of the bike back in 1987 that takes the cake. Atlas was way ahead of its times!

At the core of an Indian pulse, Atlas has etched a cherished canvas on each of the nations’ citizens, no matter what state they hail from.

“My mamaji, Sultanbhai, in Ahmadabad owned the same Atlas cycle for 38 years,” said Atlanta’s event management guru, Mustafa Ajmeri. He fondly recalls his uncle polishing his bike every week, fixing any part that was broken, but hanging on to the cycle for all those years. “Eventually a reporter heard the story and contacted Atlas company which gave him a brand-new bicycle for being such a loyal customer,” said Ajmeri.

Gandhi Foundation founder and chairman, Subash Razdan reminisced about the time his dad dropped him to St. Columbus school in Rajinder Nagar, Delhi on Atlas bicycle when he missed the school bus, with his faithful German Shepherd, Dolly, running alongside. “Then in Bandra Bombay, around 1965, I won the second place in still bicycle stunts in my high school 9th grade at St. Andrews,” beams Razdan.

“My father considered cycling and swimming two must have skills for everyone,” says Dr. Rakim Sen, Atlanta’s multi-talented playwright, documentary film maker and music director, who hails from Bengal. Dr. Sen recalls feeling superior to his friends who could not ride a bike, having learnt it early on himself. “My first major bruise, my first accident- losing balance just when I thought I learned to ride… lots of memories.”

Atlanta’s IT professional Ajay Madwesh fondly recalls riding his Atlas bike to his school near MNK Park in Bangalore. “I would ride every day in the morning, put my school bag in the “carrier” and pedal from Shankarpuram to school.”

“Not only in the production line but Atlas also topped in serving people,” observed Rana. Even as brand Atlas conjured memories galore, it found ways to firmly secure its place in the hearts of millions by way of giving back to society in multiple arenas. Rana shed light on the on the various initiatives by Atlas to serve the citizens including General Hospitals in New Delhi, Sonepat. And in Sonepet, Rana noted, Atlas initiated a senior secondary School, annual eye operation camp, Free Bicycle distribution function to meritorious n poor students of the district, libraries & reading rooms at major intersection of the city, drinking water *Piyao* at major intersection of the city, and cultural program *Jashn-e-Bahar*. Atlas integrated itself into every aspect of the citizens, setting up Atlas Dramatic Society, with annual drama shows in different cities including Sonepat, Delhi, Chandigar and Ludhiana, annual scholarship awards to merit holders of Haryana state, and annual meet of village Pradhan and sarpanch of nearby villages.

Rana saved the best for the last, recounting how Atlas focused on the overall well-being of its employees setting up wide range of activities for the staff all through the year, including Annual events such as grand stàff lunch, seating lunch *Preeti Bhoj* with workers, cricket matches with Embassies n High commission of England and Australia etc, Diwali Light and Fire show in front of factory grounds, Janmashtmi Function at *Atlas Temple*, Sports Day celebration at Factory Sports Ground, Sports Tournament at *Officer’s Club*, New Year Function of Officer’s Club in Factory canteen Hall, Family Picnic of Officer’s Club followed by dinner with Management, 3 to 5 days Family sightseeing/ religious tour to outstation location, workers tour to Haridwar, *Kharbooja* Distribution at Sonepat, Delhi, Chandigarh & Ludhiana, *Mango Party* with Security Stàff, and Fauji Bada Khana* of Security Stàff with SP of Sonepat, along with weekly Cinema Shows at canteen ground for workers and Film shows on Colour TV & VCR at Officer’s Club followed by dinner. This was in addition to Regular Factory visits of Ambassadors & High Commissioners and visits from School and College groups.

It is no wonder then, that these happy employees gave back their best. When we asked Rana what set Atlas apart from the rest, he was quick to point to the quality, standard, sturdiness, durability, and affordability of the cycles.

How does the humble bicycle fit in today’s world? Is it because of lack of customers that Atlas has shut down temporarily? Demand is not the issue, urges Rana, adding that between its basic and fancy models, what has changed over the years is the demand for fancy models which increased tremendously. He also highlighted the population index in India which always keep the demand coming in. Rana said that the government is promoting bicycles in rural area to the poor and girl students across all states, providing it to them free of cost. “Even during the pandemic, the government gave 10 Lakh cycles in West Bengal, underlining the fact that the demand still exists. We have some surplus land. We plan to sell that and utilize the funds to run the company.” He added that while bicycles keep the world green, they also provide fitness.

Atlas Cycles has carved an endearing niche for itself not just in the industry, but in the hearts and minds of millions of its riders. Whether or not Atlas Cycles can peddle a new plan to get its wheels out of the mud with the efforts of its leaders such as Rana remains to be seen. Either way, we will undeniably hold on to those cherished Atlas memories, like our timeworn Bollywood songs. Play. Rewind. Play. And repeat. Yeh cycle ka chakkar….