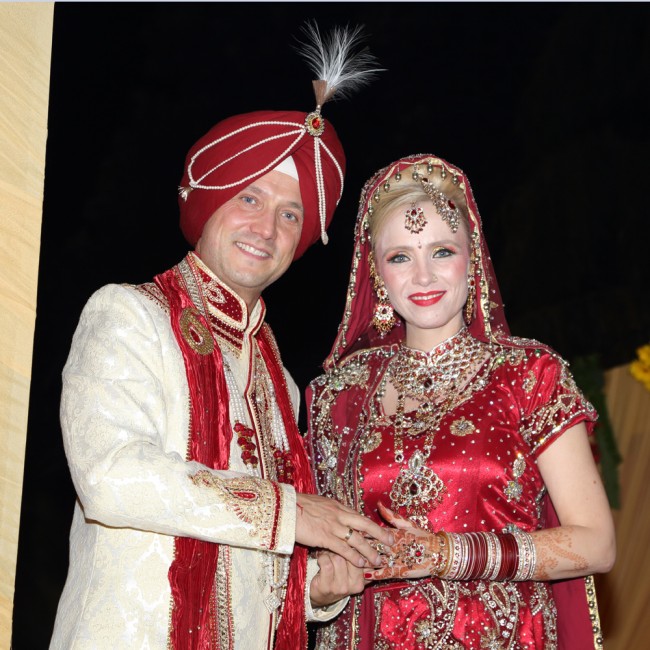 Hoshiarpur (Punjab), Nov 13 (IANS) A Danish beauty, who croons Punjabi songs, has married a Dane in a traditional Punjabi-style wedding here with several of their friends and relatives from Denmark and other parts of the world attending the ceremony.

Singer Anita Lerche, born and raised in a small town, Herlev, on the outskirts of Copenhagen-Denmark, has two albums of Punjabi songs under her belt already. Her latest album, “Sadke Punjab Ton” was released at her Punjabi wedding here Sunday. Her first album of Punjabi songs, “Heer from Denmark”, was released in 2006.

“It was amazing to be a ‘Punjabi Kudi’ bride. I am so much in love with Punjabi culture and tradition. People are so warm here. Though Soren Hjorth (her husband) and I got married in Denmark in June (this year), I always wanted to have an Indian wedding,” a super-excited Anita, who was boarding her flight Tuesday to Hyderabad for an event, told IANS.

“I felt like a princess. For the main ‘Lavaan-phere’ and ‘Mehendi’ ceremonies, I had picked up a beautiful long kurta-churidaar from an Indo-Pak exhibition. For the wedding reception, I wore a ‘Lehenga-Choli’. I was looking so pretty. My mother (Bibbi Lerche) and others also dressed up in traditional Indian dresses,” Anita said.

The Indian-style wedding was performed at the residence of family friend Anurag Sood, a businessman here. Anurag and his wife, Tracy, did the ‘Kanyadaan’ (giving away the daughter in marriage) ritual.

“Under the Sarv Dharam Sambhavana committee, we all helped to organise her wedding. It was her wish to have a Punjabi-style wedding and all went off very well. Everyone really enjoyed,” Anurag Sood told IANS.

“The couple and guests from Denmark and other countries at the wedding enjoyed it thoroughly. The bride and groom came on two elephants,” Kultar Singh, owner of Garden Court, where the wedding reception took place, told IANS.

Anita fell in love with Punjab, its culture and music during a back-pack trip to the region in 2005. It was her love for Punjabi music which attracted her to singing Punjabi songs.

“Punjab has become my second home (after Denmark). In the last nine and a half years, I have lived in Punjab for almost five-six months every year,” said Anita, who has sung in 16 different languages and sings Punjabi songs and even Hindi bhajans (hymns).

One of the songs that is close to her heart is ‘Lathe di Chaddar’ sung by legendary Punjabi singer, Surinder Kaur.

When she performs in Punjab and sings hymns, Anita makes it a point to cover her head with a ‘chunni’.

“Namaste. Twade naal gal karke mainu badi khushi hui (I am pleased to talk to you),” Anita, who is quite at ease with Hindi and Punjabi, signs off in her mellifluous tone.

10 women in Indian indie music you should know about