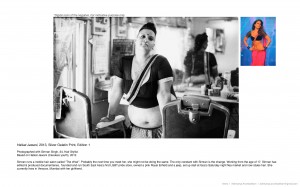 New Delhi, August 2 (IANS) Think of an ‘item girl’ and the image of a sexy woman gyrating to a pulsating beat comes to mind. This stereotypical depiction of women in Bollywood is redefined in Aishwarya Arumbakkam’s black-and-white photo exhibition where real women with real bodies confidently show off their protruding bellies as they pose as Katrina Kaif in “Chikni Chameli” or Kareena Kapoor in “Halkat Jawani.”

This interesting project was part of a recent workshop at London’s The Wilding Festival where 28 artists from eight countries worked with different media such as films, animation, illustration, ceramics, sculpture, photography and fashion to create a work inspired by Emily Wilding Davison, a militant activist who fought for women’s suffrage in Britain. 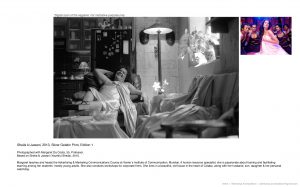 “Items” is a colloquial way of referring to an item number or an item girl. It is also used as a disrespectful term of address towards physically attractive women in everyday context, Arumbakkam writes on her blog www.aishwaryaarumbakkam.com.

So, this Mumbai-based TV commercial director decided to play with the “item girl” theme as she has always found this term “jarring”.

“Whenever you connect a woman to an item girl, you imagine a woman with a certain body type and breasts, augmented with costumes, looking extremely sensual and sexy,” Arumbakkam told IANS over the phone from Mumbai.

“It is unfair to look at a woman with only a certain body type and call her sexy,” she added.

Women of different age-groups, body types, profession and settings were scouted to be a part of the project to wear iconic costumes of various item girls spanning the 1960s till today.

From fitness trainers to professors, from hair-stylists to musicians, from journalists to maids – these women with credible conviction have effortlessly slipped into the skins of Helen, Parveen Babi and Katrnia Kaif, among others, and conformed proudly to their body types.

There is 12-year-old Rhea Malvi, sitting pretty on a bed with soft-toys lying all around. She is posing as Kylie Minogue in the “Chiggy Wiggy” number. Then, we have a 55-year-old professor, Margaret Da Costa, merrily lying on a couch in a satin fabric wrapped around her body as she poses as Katrina Kaif in “Sheila Ki Jawani”.

The outcome is brilliant, but a laborious process went into the making.

To convince these women was a tough nut to crack, admitted Arumbakkam, who revealed she has no formal training in photography except for an eight-month course in Paris.

“I met my friend’s parents, some acquaintances and some women here and there. A few friends helped in recommending people and that is how I brought women from different professions together,” she said, adding the project was curated by Akhila Krishnan and Gail Mcleod.

As the sole intention of the exercise was to bring forth those women who are comfortable in their skin and have a mind of their own, the mission was accomplished.

Shanti- Bringing Communities Together Through Music