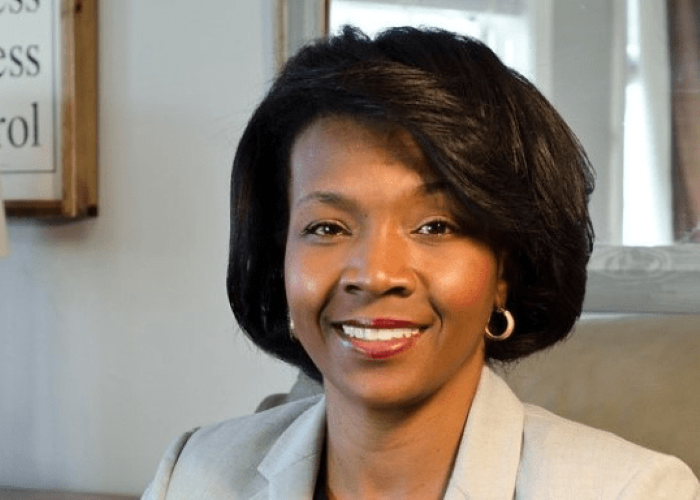 BY JYOTHSNA HEGDE
(With inputs by Veena Rao)

Atlanta, GA, March 5, 2021: The blue wave that splashed over Georgia in January 0f 2021 also brought along a few notable shifts in the political landscape of the state, including Cobb County. Democrats are a majority on the county’s governing board, with Lisa Cupid, Monique Sheffield, Jerica Richardson each flipping a board that had long been dominated by Republicans. Lisa Cupid created history as she was sworn in as Cobb County’s first African American and first woman Board of Commissioners Chairperson on January 7, 2021. In her exclusive interview with NRI Pulse, Chairperson Cupid shared her views and vision for the county.

“When I moved to the South Cobb area, and just noticed some challenges instinctively, I wanted to get involved and see how I could help to address those issues in my community. And 10 years of doing that, resulted in me finally running for office,” said Cupid about her decision to run for office despite the odds. Cupid has served as the sole Democratic commissioner representing District 4 in South Cobb for two terms and officially took over in January this year.

“I’ve always felt at least locally in Cobb, that the diversity of people was not reflected in leadership and that’s not pertaining to race,” said Cupid, adding that she was referring to the thought leadership that lags behind where the people are. Cupid said 2018 election results, that marked the “momentum of that shift (towards blue)”, particularly in Cobb, assured her that Cobb was ready for some “leadership change.”

As someone who transcended race and gender, what were the biggest challenges Cupid faced? Cupid noted that as a mechanical engineer, her journey to transcend began early on. Having moved from East to South Cobb, Cupid said she observed the disparities, where minorities of low and moderate-income formed a mast majority. “I don’t make certain suppositions because of that, I presume that if there is a task to be completed or if there is a goal, or a vision, that vision permeates all aspects of who’s in the room or that area that is meant to touch,” noted Cupid.

Candid about her own “hang-ups”, Cupid noted that while she had learned to stand up for policy matters, but does wonder as a woman, “if I am asserting myself a certain way. There are certain things that I just won’t say because I don’t want to upset the applecart. I do feel like if there are any shifts, it allows us to have some conversations and allows me and maybe others to come to the table differently than we would have in the past.”

Cupid said her two primary goals are to address governance and to address equity. She stressed the need to engage with a spirit of inclusion that provides a voice for all communities with no zip code left behind.

Apart from her “baseline goals or strategic goals”, Cupid said some of the issues she would focus upon includes transportation, transit initiative in particular, COVID response and recovery for businesses and human recovery, housing, policing in matters of social justice and finally elections, as she noted, “even though a lot of that’s being captured at the state right now, there’s still some things we can do.”

Elaborating on the transportation initiatives to have in the pipeline, Cupid spoke about Regional Transportation model Atlanta-region Transit Link Authority or ATL that passed at the state through a House Bill 930 A which provides a true regional transit platform for all of metro communities to work within, increasing opportunities for connectivity while preserving local government self-determination. Noting that local transit routes cut down due to the economy in 2011 had not been restored, Cupid said business, aging population, schools and workplaces could be well connected by transit. “I think we have an opportunity to break down what transit means to all people here that it can reduce congestion, other parts of the county. Looking at it from an economic development tool, there are jobs throughout the county where people may be able to get to, or from access to transit so it’s just learning how to speak transit in everyone’s tongue, so to speak, so it’s so powerful.”

Cupid joined Governor Kemp on a tour of the drive-through vaccination site at Jim R. Miller Park. Gov. Kemp told reporters the state had vaccinated the 1 millionth resident. While admitting that there was very little counties could do about speeding up vaccinations itself, Cupid said the county is working with the Public Health Department to crank up a call center to help answer questions and help those without internet access.

Commenting on the schools reopening during a pandemic, Cupid, stressing that the school board is a separate entity from Cobb County, observed that while there is the expectation that every child should be in school, five days a week, vaccines are not being prioritized for that body. “You don’t see certain unique policies or practices, being promulgated for that group in a way to give teachers and parents assurances.”

Speaking of assistance to small business owners affected by the pandemic, Cupid said $50 million was kept aside to assist small businesses. Earlier this year, the federal government provided Cobb County with a $132 million via CARES (Coronavirus Aid, Relief, and Economic Security) Act to help mitigate the effects of the COVID-19 pandemic for county residents and businesses. “We were surprised to find that over 50% of the grant award went to minority owned businesses,” noted Cupid. She also urged small businesses to take advantage of the county partnering with SelectCobb chamber. Cupid cited a few grants both for new and existing ventures, including $10,000 to start a business, and for businesses planning to expand. Cupid also highlighted the Business Concierge Services assists current and prospective business owners who are looking to start, expand and relocate their business in Cobb County, including business facade improvement program for certain areas of the county to where a business can get a grant to improve the facade of their business. She added that the community development page of the county lists various incentives offered by the county.

The chairwoman had a message for the upcoming International Women’s Day.

“Any woman should feel empowered, that they have this mojo that they bring to the table that nobody else has other than women. We give birth to life. And there is a connection that we have to humanity that drives us innately as women to be able to go out and go forward in a way that propels us, unlike anybody else. I hope that we continue to propel ourselves and use that to help encourage other women to step up, to be confident in whatever they pursue and lead.”

Cupid said her grandmother, who never let her feel inferior and her dad, who encouraged her to be a mechanical engineer just like him are the role models that have inspired her. Having chosen the road less traveled from very early on paved the way for Cupid to never be bogged by barriers of race or gender, but in fact being humbler for it. “There’s a lesson to be learned in leading with humility.” Indeed.