Atlanta, GA: Atlanta was in for yet another music treat when Rajdeep Chatterjee and Group performed at Impact Banquet Hall, Global Mall on Sunday, April 3. The group is on a US tour to help Ekal Vidyalaya Foundation of America’s 2016 annual fundraiser to help eradicate illiteracy, educate and empower rural and tribal India through Ekal’s one-teacher schools. They performed a splendid and enthralling concert to regale a jam-packed hall of over 500 music-lovers of Atlanta.

Starting the event with Holi flair, all guests entered the hall which was fragrant with fresh flowers and incense and were welcomed with a gulaal teeka. Sipping a delectable thandai prepared by VHPA volunteers, and later enjoying a delicious full-course dinner served by Ashiana, the guests mixed and mingled for an hour before the show, which promptly started at 7pm. Ekal’s regional administrator, Ajay Upadhyaya’s cheerful welcome was in his signature style through a few lines of the song, “Hume tumse pyaar kitna” implying how much the Ekal school children love their supporters.

Emcee Rachna Gupta introduced Rajdeep Chatterjee Group’s artists who all have impressive credentials. Rajdeep Chatterjee was among the top finalists of “Sa Re Ga Ma Pa” LiL Champs, and is also a “Jharkhand Idol”. He has recordings in “Bodyguard”, “Khiladi 786” and “Gunday” movies and 300 concerts to his credit. Pallabi Roy Chowdhury aka Dia Roychowdhury has been one of the participants of ZEE Bangla’s Sa Re Ga Ma Pa 2008. She has specialized in baul, kirtan, bhatiyali, jhumur, bihu folk singing, Bengali films, Indian TV serials, and has shared the stage with legendary singers Usha Uthup, Kumar Sanu and Udit Narayan. Sumit Guha has played the tabla on ETV, Zee Bangla,Tara, Akash Aath, Kolkata Dooradarshan, etc. Sainik Dey has played the keyboard in ‘Paanch Dasaker Gaan’ on Zee Bangla, which showcased almost all renowned vocal artists ofWest Bengaland “Govir Bani” an album by Anuradha Paudwal, based on Rabindranath Tagore’s songs. Saugata Mukherjee is highly proficient on guitar and has accompanied many well-known musicians and singers on several TV channels. 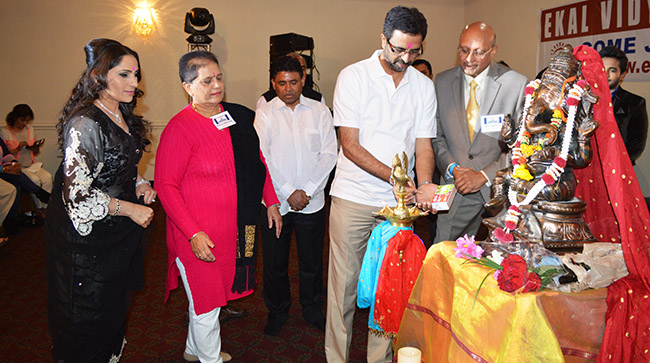 A presentation by Sneha Mehta showed the strides Ekal has made in rural/tribal education, health, empowerment and integrated village development with over 1.4 million students enrolled in 52,599 Ekal schools across India! Gramothan Resource Centers run by Ekal provide skills training and income opportunities through cultivation of high-value and organic crops, vermiculture and home-based small businesses. Atlantaadded over 90 new schools at the event. Notable among these were 17 schools sponsored by Atlanta Hindu Society, 10 by Shiv Aggarwal and 10 by Dr. Prakash Desai who matched 10 sponsored by other guests on the spot. It is very heartwarming that people have been very generous in their support to Ekal. In December 2015 at the Shaam-E-Sangeet event, orchestrated by Geet-Rung school, Atlantans came forward to sponsor 111 schools, by raising $40,000.

Kiran Kodithala, CEO of N2N Inc. (Systems Integration for Higher Education), with his 11 year old son Varoon Kodithala, both volunteers of Ekal, presented their “Literacy Heroes Challenge” which is an essay contest to be promoted through Georgia schools with the aim of supporting Ekal’s goal of eradicating illiteracy. Based on their call, literacyhero.com website immediately had 100 unique visitors and five subscribers through audience access on smartphones! Kodithala later shared upbeat news: “Varoon has launched the site in his school and he is meeting his principal to pitch this idea. Based on our collective outreach efforts, we now have 12 subscribers to the challenge and $75 in donations to Ekal.”

Being impressed with Ekal’s work, Kalpesh Patel of Raja Foods and H2K Infosys have become permanent sponsors to help Ekal bring quality programs to Atlanta audiences.  All the sponsors, dignitaries, media partners, Fifth Season decorators, Ekal, VHPA volunteers who worked tirelessly in the background got a big round of applause. Later, TV Asia’s coverage aired this memorable event on their “Community Roundup” segment on April 10th.

The highlight of the evening was Rajdeep’s concert-style non-stop, foot-tapping, latest dance numbers which had the audience dancing with total abandon not only on the dance-floor but also on the stage, with countless selfies taken with the artists!

All in all, a wonderful concert turned the musical evening into an unforgettable magical evening.