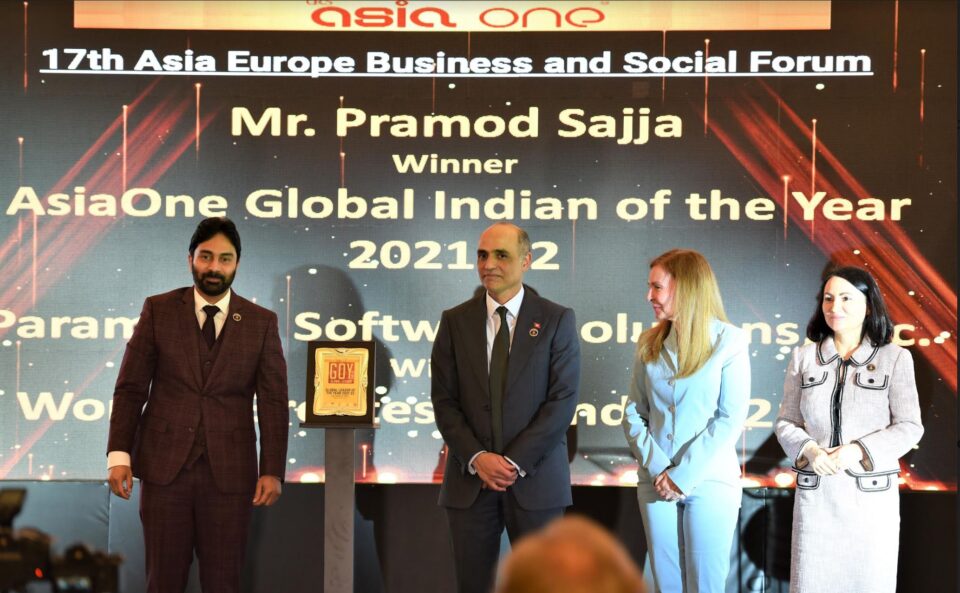 Atlanta, GA, June 10, 2022: Pramod Sajja, the Chief Executive Officer and President of Paramount Software Solutions, recently won the AsiaOne Global Indian of the Year Award for 2021-2022. This is just one of Sajja’s many accomplishments in the software and technology area. This, combined with his work for community-based organizations such as SEWA International, has made him the recipient of numerous accolades.

Sajja’s company has already started partnering with the state governments of Colorado, New York, and Georgia in order to make their energy sectors more efficient. It also continues to have large-scale projects such as Farm to Plate, a tracking system that uses blockchain to simplify the process of identifying and shipping raw plants from South American companies to Montana.

Because of this and many other innovative ventures, Sajja and Paramount have won a plethora of awards and certifications. Some of these include an Inc. Best in Business Award, the Great Place To Work certification, and Fast 100 Asian American Business Award. These are just three of the over 15 major awards and certifications featured on their website, the majority of which speak to the robust and secure working environment in the company fosters within its doors.

Sajja himself has a Master’s Degree in Business Administration with a major in Marketing & Finance from Osmania University. His biggest values seem to be promoting both employee and customer satisfaction, and he has worked extremely hard to make sure everyone that works for his company has a wonderful experience.

According to the AsiaOne article written in his honor, “Pramod encourages professionals to take charge of their own careers. He has introduced a leadership culture of Holacracy at Paramount, which is a system of management where roles are not assigned and employees are allowed to work across departments and teams without restrictions.”

It is no surprise, then, that a survey conducted at Paramount found that 99% of employees rated it to be a great place to work; Sajja has shown a consistent focus on making his company a comfortable and secure space for his employees.

The Global Indian of the Year Award was one of many bestowed at the Asia Europe Business & Social Forum (AEBSF) 2022. The forum honors entrepreneurs, researchers, brands, and organizations from across three continents and has given out thousands of awards and represented over 6500 delegates so far.

This year, Sajja was honored at the London Marriott Grosvenor Square Hotel for the 17th Edition of the AEBSF, with all the honor and accolades given at what was essentially referred to as “the Business Oscars.”

“Pramod Sajja is a distinguished visionary in the software industry,” announced the video presenting him with the award. “For two decades, Pramod has driven evolutionary technology and staffing solutions for a global clientele.”

In addition to his esteemed work in the IT industry, Sajja believes a lot in philanthropy and giving back to his community. His mantra, “Rethink, Reinvent, and Give Back,” reflects his desire to combine his passion for entrepreneurship with helping the community. He is a mentor to many up-and-coming entrepreneurs in the technology department.

Additionally, Paramount also partners with several nonprofit organizations focused on helping the Asian-American community. Examples of these include Vibha, Sewa, Access Life America, The Technology Association of Georgia, and US Pan Asian American Chamber of Commerce.

Additionally, Sajja received the Humanitarian Award from the Global Mental Health Association in 2021 as a way of acknowledging his notable contributions to improving mental health in the community. Through his philanthropy and entrepreneurship, Sajja continues to make huge strides in the technology sector of the Asian-American community.