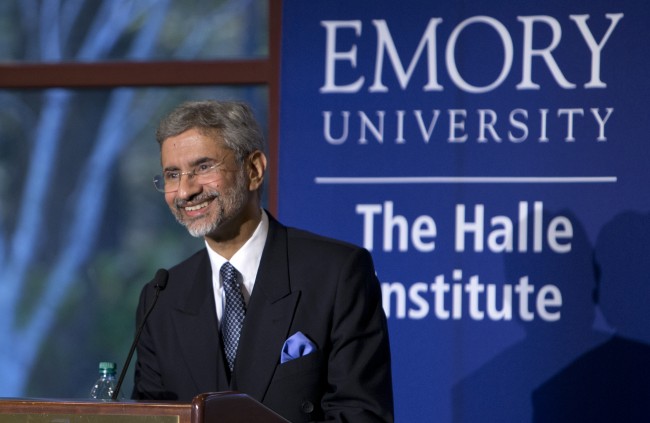 Atlanta, GA: Indian Ambassador to the United States S. Jaishankar delivered a public talk, “India and the U.S.: Taking the Relationship Forward,” on November 19 at Emory Conference Center Hotel’s Silverbell Pavilion. The event was hosted by Emory’s Halle Institute for Global Learning. This was Dr. Jaishankar’s first visit to Atlanta as Ambassador.

Ambassador Jaishankar’s talk focused on the history of India-US relations, its significant growth in the recent past, and the bilateral cooperation necessary to take the relationship forward in the future.

The two countries have had a “distant and difficult relationship” in the past, he said. As one of the super powers after the Second World War, the US had multiple priorities, sometimes contradictory, part of which worked for the US-Indo relationship.

“One the one hand, we had the US providing significant economic assistance to India in terms of food aid, infrastructure projects, setting up of educational institutes in India etc. There was a broad sympathy for a democratic society that was establishing itself against all odds.” On the other hand, he said, theUSwas focused on an ideological competition with theUSSR, in the pursuit of which, theUSwas somewhat disdainful ofIndia’s security interests, and a little impervious to consequences of arming a hostile neighbor. ThatIndiaoffered neither a significant market nor a fertile investment climate, didn’t work in its favor, he added.

From the Indian side matters were no less complicated, he said. The post –independence climate was marked by continuous suspicion of western powers. Indiahad its own balance of power cultures centered around Asia, and cultivation of the USSRwas a key element of that relation. India’s preferred policy was to avoid unnecessary entanglements, preserve its own freedom of choice and leverage a polarized world. “This was not a different approach from what the USdid in the 19th century, he said.

Half a century after India’s independence the relationship was still ambivalent, he said, adding that unlike major powers, India was never in direct conflict with the US.

The relations between the two countries started to change thereafter for a number of reasons. In the 1990s,Indiabegan its economic reforms that significantly increased its growth rate and made it a increasingly serious destination forUSinvestment and trade.Indiaalso emerged as a player in the services industry at time when the dot com revolution unfolded in theUSand the demand for techies went up.  Indiaovercame its teething problems to establish national cohesiveness.

“In terms of international security its emergence as a nuclear weapon state gave it greater weight,” he said.  This was further amplified by its responsible behavior and political restraint. The global security order transformed in the aftermath of the cold war and saw the rise ofChina. Developments to the west ofIndiasaw new threats arise to plural and secular societies. Finally the rapidly growing Indian-American community helped to determine the image ofIndiain this country.

Ambassador Jaishankar pointed out that the growth in Indo-US relations has happened through different administrations in both countries. An important shift was theUSstance over the Kargil war. The India-US nuclear deal enhanced the relationship further, as did the parallel defense trade that took place between both countries.

Economic interactions between the two countries are also rising steadily. In the last decade trade and investment levels have tripled. “We are approaching each other now increasingly as global partners. In short we are moving towards a full spectrum relationship,” he said.

The last part of Ambassador Jaishankar’s talk focused on the question, “Where do we go from here?”

“From the Indian perspective, the American relationship is important for the realization of key national objectives- for growth and for expanding employment opportunities,” he said. “As the driver of global sentiment and provider of capital technology and best practices, the role of the US cannot be overestimated. Other countries take their economic cues from the US.”

Security is another area of collaboration, the Ambassador added. “We face similar threats, sometimes from the same sources. A stronger India is of strategic interest to the US. A dynamic Indian economy is an investment opportunity and an attractive market for theUS. An English-speaking India a natural ally in its human resources.

Ambassador Jainshakar said Prime Minister Narendra Modi’s recent visit to theUShas widened the ambit of bilateral cooperation, and has re-energized the relationship between the two countries. “There are no obstacles to raising our ties to new levels,” he said.

Quoting from the joint op-ed by President Barack Obama and Modi in the Washington Post, he said: While our shared efforts will benefit our own people, our partnership aspires to be larger than merely the sum of its parts. The promise of a better tomorrow is not solely for Indians and Americans: It also beckons us to move forward together for a better world.

“It is that journey that will make ours a truly defining partnership,” he concluded.

Ambassador Jaishankar was earlier introduced by Ambassador Marion Creekmore, former US Ambassador to Sri Lanka and the Maldives.