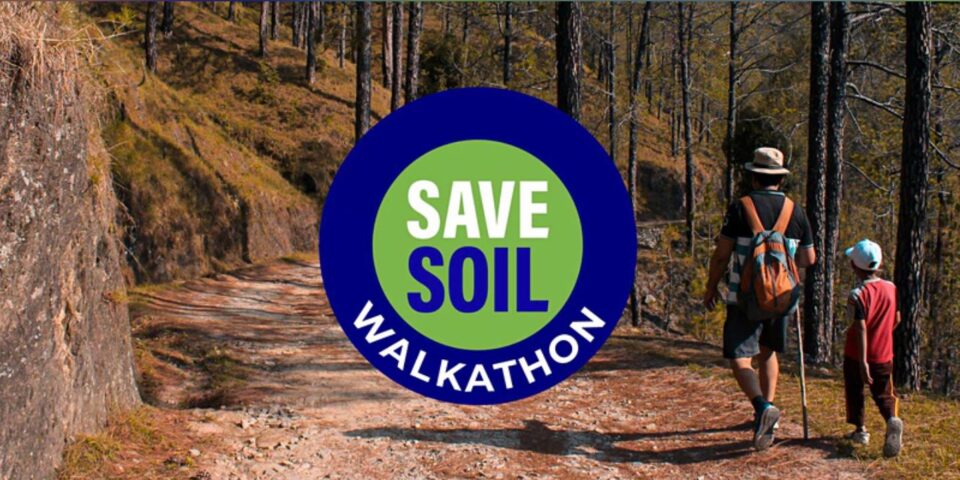 Atlanta, GA, June 10, 2022: Where do you look when you walk? Perhaps you gaze at other people, or the landscape, or the road ahead.

This Father’s Day weekend, June 18th and 19th, the Save Soil movement will ask you to look down instead—at the soil. Sixty cities across North America and Latin America will host coordinated walkathons to raise awareness of a silently brewing crisis: soil degradation.

All food comes from a single source: the soil. Frequently likened to a thin layer of skin covering the earth, soil contains an ecosystem of innumerable species that anchor all life on the planet. Simply put, without soil, growing food for human consumption would be impossible.

However, over the past 150 years, more than half of all planetary soil has been lost. Currently, 50% of U.S. soil and 75% of European soil lacks sufficient organic content. It is predicted by scientists that by 2045, the world’s population will grow to 9.3 billion people, yet the world will produce 40% less food than it is producing now.

At this calamitous rate and without immediate and decisive action, the earth’s remaining cultivable soil will become extinct in a matter of decades.

Save Soil, an initiative launched by global leader and visionary Sadhguru, is a worldwide effort to reach and educate over 3.5 billion people around the globe, by rallying citizen support and advocating policies that support soil health.

The approach of this movement is unique in that it fosters involvement through inclusiveness, joy and inspiration. By mobilizing people now, change is possible and we can make it happen by coming together as one voice.  Indeed, Save Soil’s overarching goal is to increase the organic content of the world’s soil to 3-6%—an achievable target if the world acts now.

Sadhguru is currently on a 100-day, 30,000 km journey after launching the global Movement to Save Soil from extinction this March. His journey began in London on 21st March and will culminate in southern India in late June.

A wide variety of public figures, from His Holiness the 14th Dalai Lama to leading primatologist Dr. Jane Goodall, from author Deepak Chopra to Salesforce’s Marc Benioff, are supporting Save Soil and its goals, giving voice to what has, to date, been an entirely silent ecological disaster.

The Save Soil movement has also garnered support from millions of volunteers worldwide. A volunteer, David Tunnah shares: “Volunteering for this movement has been an incredible experience. To raise awareness for such a critical issue with joy, hope, and inclusiveness has been a breath of fresh air. It’s wonderful to see people working together from all over the globe. As a father, I can’t imagine a better way to spend my Father’s Day than participating with my children in an event that will impact their future and generations to come.”

Join thousands of people across the Americas and walk to raise awareness for Save Soil. The next decade is our chance to overcome the soil crisis, and we can do it. See www.savesoil.org/walkathon to register.

For more information to cover this story, contact Shalini Musini @ 770.402.9604 or Shalini.musini@gmail.com. This Walkathon is organized by Isha Foundation, a non-profit 501(c)(3) tax-exempt organization, in conjunction with Conscious Planet.

About Conscious Planet – Save Soil Movement

The Conscious Planet Movement to Save Soil is a global civil movement to inspire a conscious approach to saving our soil and planet. This is, first and foremost, a people’s movement. Its aim is to activate the support of over 3.5 billion people (over 60% of the world’s voting population) to make ecological issues an election priority for governments across the globe.

The Movement aims to urge and support governments in formulating policies that will address soil health in their country and make farming activity more soil friendly to halt and reverse further soil degradation globally. The primary recommendation of the Save Soil Movement is for governments across the world to legislate policies that will mandate a minimum of 3-6% organic content in all agricultural soil in their country.

World leaders, influencers, artists, subject matter experts, farmers, spiritual leaders, NGOs are among those who have pledged their support to rekindle humanity’s relationship with soil.