Atlanta,GA, July 9, 2018: The Consulate General of India in Atlanta in collaboration with the City of Sandy Springs and over 50 community organizations celebrated the 4th International Day of Yoga 2018 (IDY 2018) at the Heritage Park,Sandy Springs on June 24. Consul General Nagesh Singh, his wife Pragjna Singh and Consul Shailesh Lakhtakia graced and inaugurated the event, which was attended by over 1,000 yoga practitioners from all walks of life.

The event was inaugurated with the traditional lighting of the diya (lamp) by CG Singh, Pragjna Singh, Consul Lakhtakia, and core team members Rajan Vedak, Viral Trivedi, and Rajiv Menon.

The yoga enthusiasts, including children of all age groups, internationals and the physically challenged, donning tee shirts with 4th IDY logo rolled their mats on the lawns.

“The IDY has been unanimously supported by 170 nations and is being celebrated globally,” said founding member Ajay Houde in his welcome address. 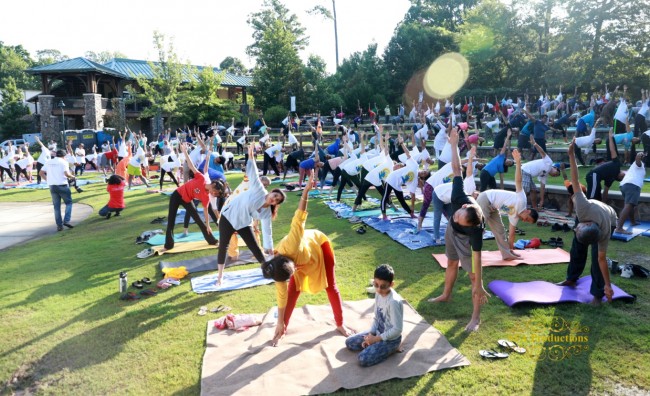 Consul Lakhtakia said it was heartening that 4th IDY in Atlanta had maximum participation in the region. “We welcome the participation of our younger generation because we feel that they should develop positivity, have good mind and body and move on in life. In addition to the support from 50 Atlanta organizations, a few non-organizations as well have lent their support. I must thank the City ofSandy Springs who have been kind enough all these years to support this event. We must thank the Police and other supporting agencies,” he said. 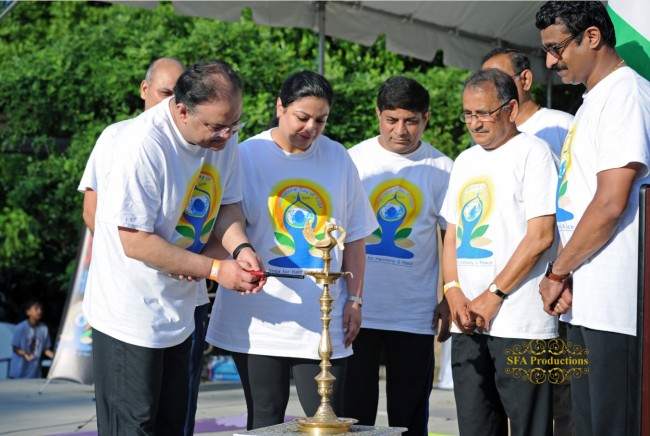 In a video message, Prime Minister Narendra Modi hailed yoga as one of the most precious gifts given by the ancient sages to humankind. “It is said in the Gita that yoga is a state of equilibrium and equanimity. Yoga is not just a set of exercises that keeps the body fit. It is a passport to health assurance, a key to fitness and wellness. Free from illness, a path to wellness that is the path of yoga because it teaches us to see others as the same as ourselves. .When we understand ourselves we become ready to form a constructive bond with the society at large, a bond of oneness with our families, with society we live in, with fellow humans, all the birds, animals, bees with whom we share our beautiful planet. Thus yoga is a journey from ‘me’ to the ‘we’,” he said.

“Our next challenge is to produce institutionally trained yoga teachers, standard yoga system, teachers who can ignite the strength further especially among the youth,” he added.

In his brief lively remarks, CG Singh highlighted the importance of yoga and acceptability of yoga across the globe. “Yoga is a kind of exercise which takes care of the body, mind and your spirituality and generally promotes peace in individual and across nations and countries and that is why this year’s theme back in India is ‘Yoga for Peace’. People call it an intangible cultural heritage of India, but I think it is tangible,” he said. 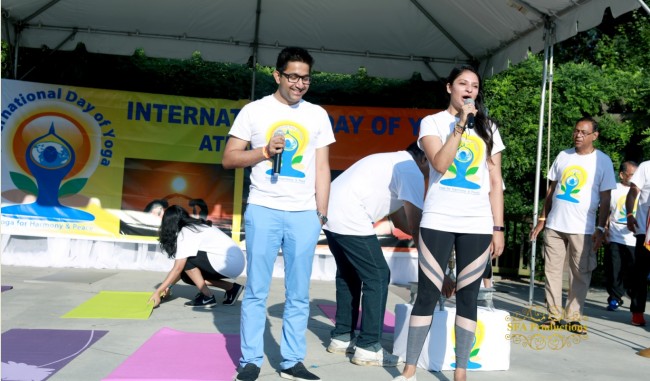 The program was emceed with vivacity and in a relaxed manner by Vandana Aggarwal, a Georgia Tech graduate and a registered, proficient yoga teacher and Archith Seshadri, also a Georgia Tech graduate and a recent  anchor at Zee TV’s WION news channel inNew Delhi, and a former anchor or journalist for CNN, ABC and Fox News. They took turns to lead the gathering in common yoga protocol, created by the India Govt.

Following the chanting of the highly revered Gayatri Mantra, Vandana and Archith, with the help of seasoned yoga volunteers on the stage, took turns to guide the attendees in performing an array of asanas beginning with basic and easy to more advanced. With soft music in the background, the attendees performed warm up practices, standing and sitting asanas (postures); sitting, prone, supine asanas (postures); kapala bhati & pranayama by Patanjali Yoga Group, (Breath altering practices); dhyana (meditation) and sankalpa (commitment to the truth).

A pleasant treat was provided in the form of ‘Laughing yoga’. Soon the park reverberated with joyous laughter, which no doubt, energized all the participants.

The Atlanta volunteer trainers of Heartfulness Institute shared their meditation prayer with the gathering. The institute also had a booth where the volunteers disseminated information about Heartfulness meditation.

The young participants were presented with certificates of appreciation by Archith and Vandana.

The program concluded with the closing sankalpa by Hindu Swayamsevak Sangh volunteers and Shanti mantra by Sadhvi Prempuri. 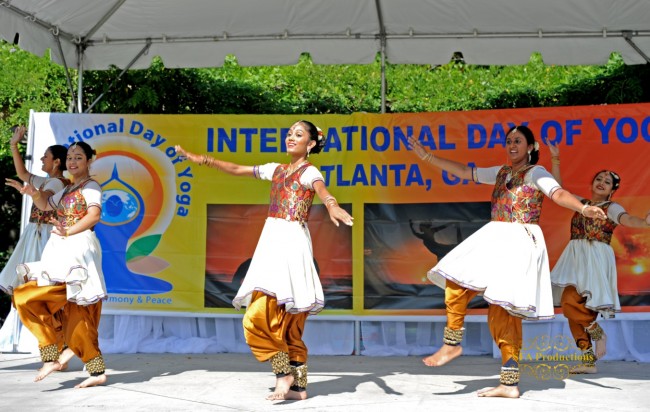 The event was supported by sponsors and voluntary contributions by various business and professional entities including House of Spices, Raja Foods, BAJAA, GAPS and Suvidha.

More than 100 volunteers put enormous efforts to make this program a grand success. Very effective use of social media was made to publicize the 4th IDY and also to exhort the community to attend it. The India Consulate, Atlanta and Sudhir Agarwal, Rajan Vedak, Ajay Houde, Rajeev Menon, and Viral Trivedi to mention a few did a commendable job in ensuring a flawless and memorable celebration of the 4th IDY.