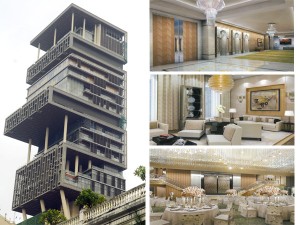 Washington, May 15 (IANS) Reliance Industries Chairman Mukesh Ambani’s skyscraper Mumbai home Antilia – named after a mythical island in the Atlantic – has been rated as the world’s “most outrageously expensive property” by Forbes magazine.

Two of Indian steel tycoon Lakshmi N. Mittal’s houses in Kensington Palace Gardens in London also figure among the 21 most expensive billionaire homes in the world rated fifth and 18th.

“The title of the most outrageously expensive property in the world still belongs to Mukesh Ambani’s Antilia,” it says.

The 27-storey, 400,000-square-foot skyscraper includes six stories of underground parking, three helicopter pads, and reportedly requires a staff of 600 to keep it running.

Construction costs for Antilia have been reported at a range of $1 billion to $2 billion.

To put that into perspective, Forbes notes “7 World Trade Centre, the 52-storey tower that stands just north of Ground Zero in Manhattan with 1.7 million square feet of office space, cost a reported $2 billion to build”.

Mittal’s neo-Georgian mansion on ‘Billionaires Row’ was reportedly purchased from hedge fund billionaire Noam Gottesman in 2008 for about $222 million.

He spent millions into its renovation and named it “Taj Mittal”. It has 12 bedrooms, a pool and marble sourced from the same quarry as the Taj Mahal, Forbes reported.

Brazilian philanthropist and social figure Lily Safra’s Villa Leopolda in France is at the second place, while businessman Ira Rennert’s Sagaponack residence in New York is at third place.

An unknown owner’s $237-million home in Hyde Park, London, is listed fourth ahead of Mittal’s residence.