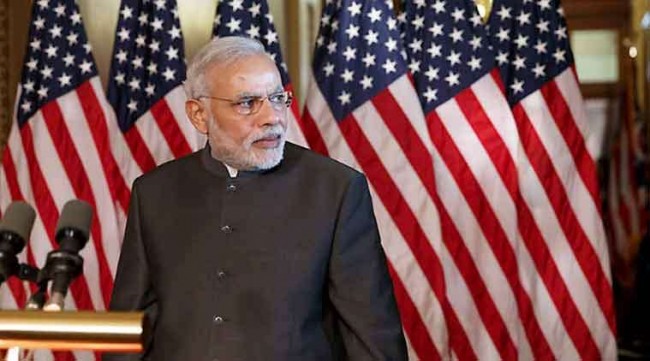 Washington, Sep 4 (IANS) Ahead of Prime Minister Narendra Modi’s visit to Silicon Valley, a war of words has broken out between pro and anti Modi academics of Indian descent spread over major American universities.

The first salvo was fired by over 100 professors “who engage South Asia in our research and teaching”, asking US technology executives to be wary of supporting Modi’s Digital India initiative when he visits Silicon Valley on Sep 27.

The other group hit back with “a counter petition against the anti-Modi statement given by some faculty of South Asian studies” on Change.org, an American website providing a petition tool backed by nonprofits and political campaigns. By Thursday evening the counter-petition accusing the anti-Modi group of lacking “the slightest respect for facts and for academic integrity” had gathered 1108 supporters.

“The allegation that Narendra Modi ought to be viewed with suspicion, if not disdain, by business leaders in Silicon Valley because of surveillance implications in the Digital India initiative seems a desperate ploy rather than any genuine concern for India,” the counter petition said.

“Their attempt to invoke an admitted mistake on the part of the US government in denying Modi a visa as a ‘powerful signal’ is a stark case of false reasoning …and a deplorable attempt to exhume ugly lies about Modi’s attitude towards Muslims,” it said.

The “allegations that somehow academic freedom is under threat in India because of administrative changes at a couple of institutions are completely belied by the reality of what Indian citizens see in their news media every day,” the counter petition said.

“On the contrary, for all their talk about assaults on academic freedom, the signatories of the anti-Modi letter have never admitted that the subject of the greatest censorship and distortion in South Asian academics in recent years has been Narendra Modi,” it said.

Rejecting “the faculty statement against Modi in its entirety,” the pro-Modi group asked the other “to introspect, change, and for once seek to earn the trust and respect of the community in whose name they have been making a living all these years.”

Responding on the Academe Blog, the anti-Modi group said “despite the intimidation and harassment we have received at this blog site and elsewhere” their numbers had swelled from 125 to 135.

The group claimed that it “did not ask Silicon Valley companies not to invest in India; we asked them to consider carefully the terms of partnership with India.”

“The objective of our letter is to raise awareness and debate in Silicon Valley and elsewhere, of Mr. Modi’s record on key issues related to ‘Digital India,'” it said.

While “technology can unleash potent changes in society, many of them positive,” the group said, it can also pose a threat to privacy that “is certainly not unique to India.”

“We caution any Digital India plan to be cognizant of these risks, and to take effective, transparent steps to protect against them.”

“Given the Modi administration’s intolerance of dissent, its poor record on freedom of expression in general, and on freedom of religion in particular”, the group asked “What does ‘Digital India’ look like.”

Even as they raised questions about Digital India, the group in its original Aug 27 letter acknowledged that Modi, “as Prime Minister of a country that has contributed much to the growth and development of Silicon Valley industries, has the right to visit the United States, and to seek American business collaboration and partnerships with India.”