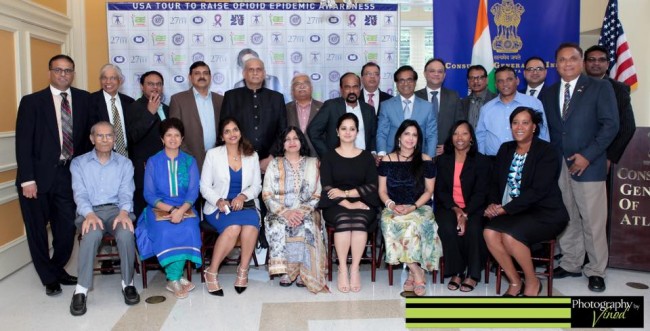 Every day, more than 115 people in the United States die due to opioid overdose.  The Atlanta based Center for Disease Control (CDC) estimates that the cost of medical care and substance abuse treatment for opioid addiction and overdose is $78.5 billion a year. In March this year, the Trump administration outlined an initiative to stop opioid abuse. The three areas of concentration include law enforcement and interdiction; prevention and education via an ad campaign; and job-seeking assistance for individuals fighting addiction.

“Over 17% of students are addicted to drugs inNorth Fulton,” said Dr. Naresh Parikh, incoming AAPI President, pointing to the problem right at home. He lauded Dr. Sanjay Gupta of American Pain Association for his efforts to raise awareness and for collaborating with AAPI to further the cause. He thanked Bhavana Anand of Anand Entertainment for their support to the cause.
Dr. Sreeni Gangasani, Chair, AAPI Atlanta Convention 2019 and organizer of the initiative earlier extended a warm welcome to the audience, thanking Consul General Nagesh Singh and the Consulate for hosting the event.

“The Consulate is happy to host such Pan-Indian, Pan-American events that cuts across our narrow identities. This effort by AAPI/GAPI to spread awareness is truly remarkable,” said Consul General Singh. Speaking about his own unawareness of the rising epidemic, Singh said he was alarmed by what he eventually learned. He offered to collaborate with the effort even from India, and pointed to the fact that this might in fact be an issue in India also.

“I’m humbled by the opportunity,” said Anand urging everyone to join Anand Entertainment and American Pain Association’s Opioid Awareness Campaign featuring singer Shaan who will be performing across 10 states in the US to promote the cause. Shaan’s concert in Atlanta is scheduled for July 14, 2018 at the Georgia World Congress Center.

“Just last year, the number of deaths was more than that of the whole Vietnam War; it’s 9/11 happening every 2 weeks in America,” said Dr. Sanjay Gupta, who played an instrumental role in recognizing the need for awareness of the epidemic, after he lost three of his friends to overdose.

Dr. Gupta talked about Insys, whose profits in billions was earned by paying off doctors to prescribe pain medication. “75% of opioid addiction starts with prescription,” he said. 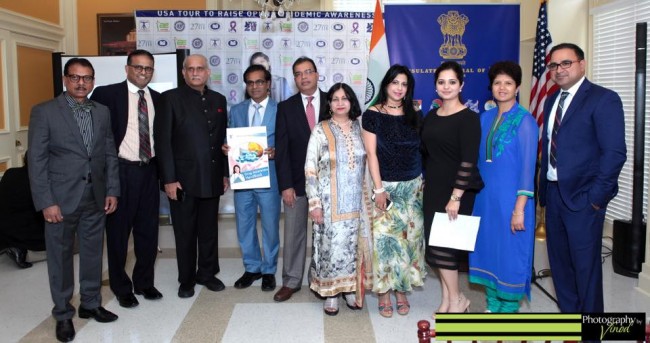 Noting that the problem had been prevalent since a long time, he said the main issue was that no one ever complained about it. He addressed usage of cannabis as analgesic. Expressing concern over kids using opium as a fashion statement, he emphasized the need for active public involvement. Dr. Gupta also highlighted the dangers and misuse of Suboxone treatment, which is actually designed to treat opioid addiction.

“We have been engaging schools and university students who run the show without teachers involved. We have a team of Wharton students working on this project and we would like for all students to avail the benefits,” Dr. Gupta said.

Student led “Champions of Change” clubs with 5-10 members from each institution will be provided guidance and resources for research, education and other projects. Clubs in each school will coordinate with other such clubs to get guidance at the National level.

Another initiative involves distribution of a “Drug Awareness Resource Book” nationwide to physicians, community members, law makers and the media. APA is seeking ideas, articles and drawings from adults and kids. Yet another initiative is the national tour travelling each state, providing a platform for discussion with legislators and experts on Opioid Epidemic. The North American ten-city tour with Shaan is another attempt to draw focus to the issue.

Dr. Raghu Lollabhattu past president of GAPI shared the history of GAPI and its involvement with various charities.” The Government can implement a rule. But public involvement is just as important,” he said.

Recognizing the enormity of its effects, La Trina Foster, Director, Behavioral Health and Developmental Disabilities said a special post of Opioid Coordinator was created just to address the issue. She said Fulton was the first county in Georgia to join a nationwide lawsuit against opioid manufacturers and distributors, adding that other counties will soon join. 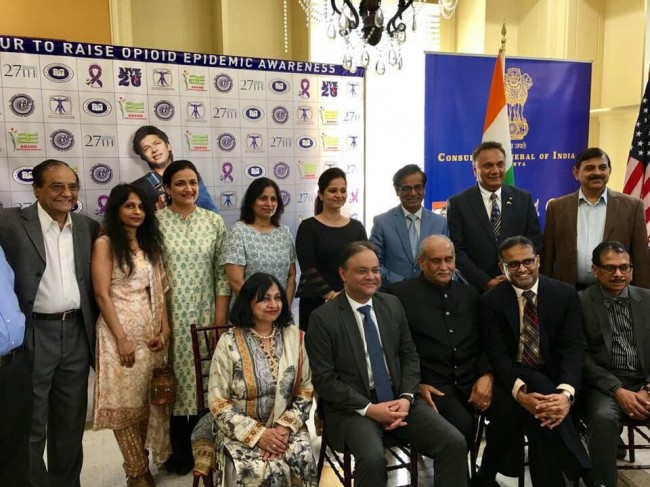 She added that the county has created a crisis hotline so drug users, their caregivers or friends can speak with a licensed consoler and immunity is offered to those reporting it. She lauded the efforts of District Attorney’s offices’ Fulton County Heroin Task Force.

“This is a complex Issue” said Sudhakar Jonnalagadda, Secretary AAPI, in his vote of thanks. He emphasized the need of family, school, work places and medical institutions to work in unison.

In her closing remarks, Dr. Asha Parikh expressed concern over prescribing pain medication to patients who actually need them. Having witnessed both sides of the spectrum, she and her husband Dr Naresh Parikh wondered if there was a standard dose that is tolerable by patients and does not being them under the radar for over prescribing.