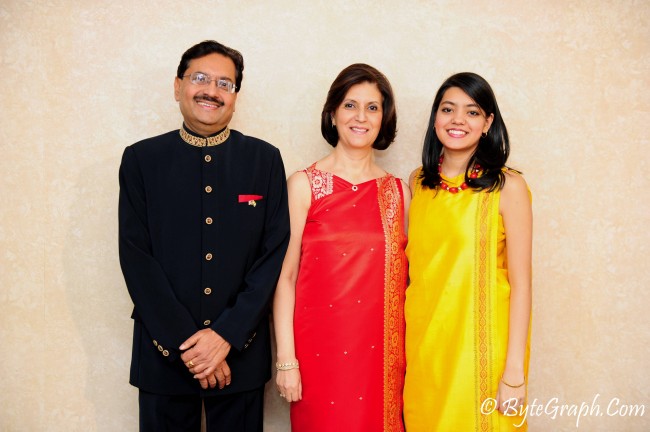 Ambassador Ajit Kumar with his wife Margret and daughter Trisha. Photo by Bytegraph.com.

Atlanta, GA: Consul General Ajit Kumar has been appointed as Ambassador and Permanent Representative of India to the United Nations Offices in Geneva. He is expected to take up his assignment shortly.

Ambassador Ajit Kumar arrived in Atlanta in 2011 and established the Consulate General of India here. Speaking about his term in Atlanta during the Consulate’s Republic Day celebrations held on January 26, Ajit Kumar had said: “I came to Atlanta 3 ½ year ago and fulfilled my mission of opening the first Consulate of India in Atlanta and also continue our increasing consular and commercial services.  I wish to thank all friends and leaders of the community who have assisted the Consulate in taking the India-US relationship forward.  I have attended functions of nearly all major India Associations in Atlanta and in South East USA.  I have also tried to engage and integrate the community and carried on my duty to the best of my ability.  My family and I  have enjoyed Southern hospitality.”

Kumar first joined the Indian Foreign Service in 1979 and has held posts in Damascus; Mexico City; Islamabad (Pakistan); and New Delhi. As the deputy leader of the Indian delegation to the Conference on Disarmament in Geneva, he participated in multilateral negotiations on the Comprehensive Nuclear Test Ban Treaty (CTBT) in the 1990s.

From 1996 to 2000, he served as Director and Joint Secretary in the Disarmament and International Security Affairs (DISA) Division in the Ministry of External Affairs,New Delhi. He attended several sessions of the United Nations Disarmament Commission and the UN First Committee on Disarmament and International Security issues inNew York. He also attended several sessions of the Conference of the State Parties of the Chemical Weapons Convention inThe Hague. He was a member of the Indian delegation to the Non-Aligned Ministerial meeting held inCartagena,Colombiain 2000.

He is married to Margret and they have two children.