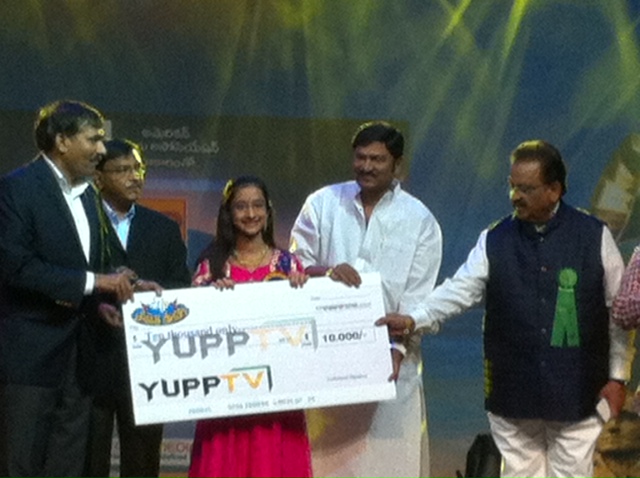 Atlanta,GA: Meghana Pothukuchi of Johns Creek, GA won the Paadutha Theeyaga singing competition, hosted by the legendary Dr. S.P. Balasubramanyam in the US in July 2014. The competition is a reality based singing talent search competition seeking to discover the best singing talent by conducting a series of auditions across all the major cities of USA.

Dr. S.P.Balasubramanyam (SPB to many of his ardent fans), the host of the competition, is a phenomenon that needs no introduction. His extraordinary singing capabilities, his ready wit and humor, his passion for perfection and his down to earth simplicity laced with respect for all endears him to everyone and magnifies his stature a million times. 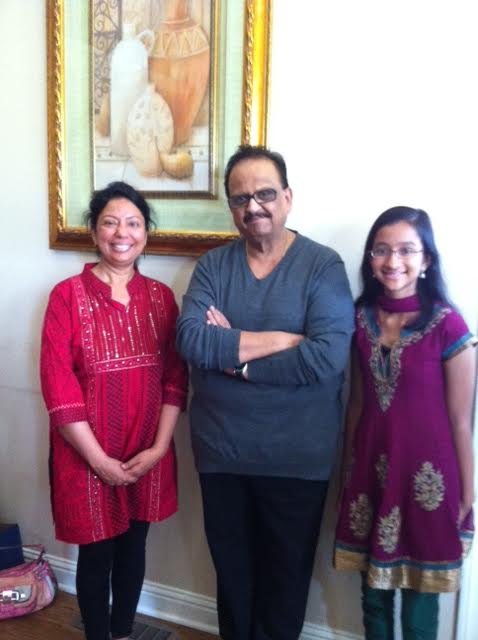 The Paadutha Theeyaga journey started in December of 2013 for Meghana, when she submitted her audition song- Sadiseyako Gaali” from the movie “Raja Makutam”.  When Paadutha Theeyaga responded favorably in April, her excitement knew no bounds.  After the initial excitement, apprehension mounted on young Meghana as the tasks for the competition loomed in front of her—She had to memorize the Telugu lyrics for 23 songs, get the correct pronunciation, understand the meaning and then sing with a LIVE Orchestra. What made it really daunting was that she cannot read/write or speak in Telugu.

Character evolves only when grit and determination are tested, she committed her entire time and energy to start learning and memorizing songs. Destiny paved the way for her to get help from an accomplished teacher Mani Sastry— a perfectionist who would leave no stone unturned to help the young children understand the meaning of the Telugu lyrics, to get the correct “bhavam” while singing. Meticulously, the teacher and student worked to polish each of her songs, understand the lyrics, and correct the pronunciation.

The experience of singing first time with a live orchestra is a challenge in itself. Gearing up to interact with the legendary SPB, a perfectionist who has music in his soul, goodwill in his heart and an ocean of knowledge, is an experience unlike any other. True to his fame and reputation, the maestro with his affable smile and caring nature quickly allayed the fears of the young children and added an entirely new dimension of enrichment to the competition. He quickly connected with the kids affectionately and gave meaningful insights on the song and lyrics and ensured that each participant received fair and honest feedback that only helped each child to improve further. 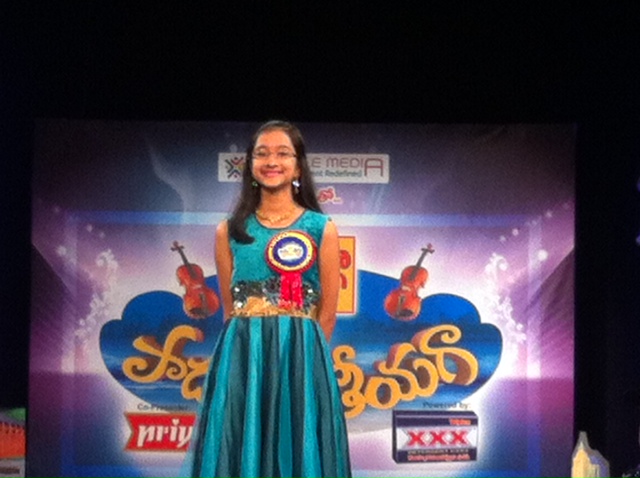 Apart from the challenges of singing, the competition was hosted in different cities and provided the challenge of having to travel every week. In all she had to do 23 songs across 8 cities in 6 weeks—which meant there was very little time to settle down at one place and even less time to dwell on feelings of home sickness. The only way out was to focus on the songs and prepare for the weekend. And that is what she did – even if it meant living with a set of ear plugs and practicing songs as she walked across busy airports. On the flip side she can now maneuver any busy airport like a professional traveler!!

After the grueling sessions, rigorous memorization, nail biting moments of suspense at elimination rounds, the stage was set for a dramatic finale in front of 3000+ audience at the prestigious Convention Center in Downtown,Philadelphia. As the three rounds of competition went through and her results were declared, it was a moment of glory that she will cherish for a long time to come. In her journey to this achievement, Meghana made her family and teachers proud and understood that true happiness results from determination, hard work and focused practice.