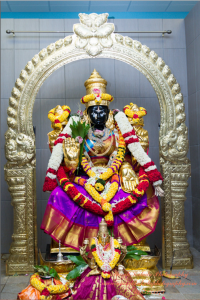 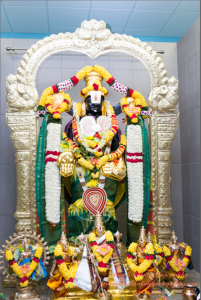 The spiritually infused ceremonies were spearheaded by Atlanta’s learned and experienced priest Sri Keshava Murthy, who is also the president of the temple. He and eleven priests from Tirupati andVizaganagram,India and other states in the US meticulously performed all the rituals and ceremonies with devotion and cheerfulness. The enjoyment of the celebrations was enhanced by the sweet strains of nadhaswaram byS. Kasimand S. Babu, the grandsons of Sheik Chinna Moulana, a legendary nadhaswaram player in the Carnatic tradition. 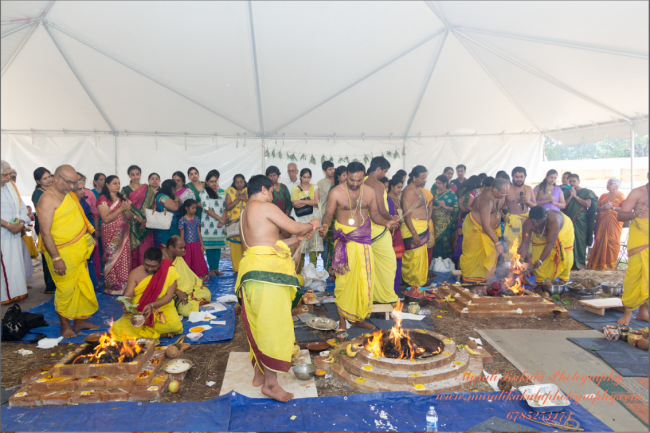 A huge tent (yagasala) was erected on the foreground of the temple. Under the tent, the volunteers had made several homa kundas and artistic, attractive and colorful display of a blend of fresh fruits, flowers and other pooja accessories. 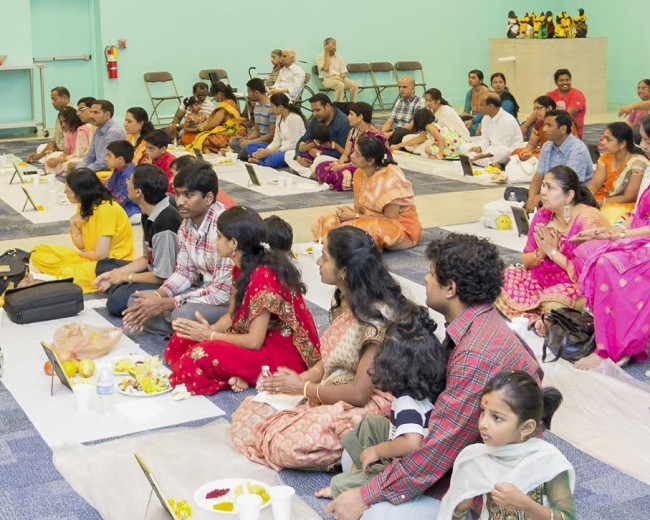 Aided by cranes and scaffolding the deities were installed inside the temple on Friday night. The main inauguration took place on Saturday morning. After Vaasthu homam and paryagnikaranam, Maha ShanthiAbishekam was performed for all deities. This was followed by Yajmaana Sankalpam, MahaPoornahuthi, Yaathra DanamPrana Prathistaapana. Afterspecial alankaarams, the deities looked resplendent in their ornate fineries and colorful garlands. First archana was performed for all the deities.In the evening, after Padhmavati Sametha Sri Vaari Vishesha Maha VaibavaKalyaana Mohothsavam and Praakara UtsavamDholothsavam, the devotees participated in MahaShyanothsavam (Laali Bhajans), and Indraja Murthy delighted the devotees with a scintillating Bharatanatyam dance.

On Sunday morning, Suprabhatham, and Nithyaaradhana for all the deities was performed. This was followed with a Samoohika Ramaadevi Sahitha Sri Satyanarayana Pooja, in reverence to Lord Visnu.The temple looked awesome with the dazzling deities of Lord Ganesha,Goddess Sri Maha Lakshmi;Lord Balaji and Lord Hanuman ji.Nava Grahas on a pedestal and Uthsav Murthis also wore a festive look. Many devotee couples and individuals participated in the Satyanarayana Pooja with great faith and devotion. They were all given the pooja samagri and the priests led them in performing the pooja. To help understand the Katha, Achyuth Murthy and Chandrika Vedanta(both are High School students) recited it in English.After the pooja, all were given panchamrutam and prasada. 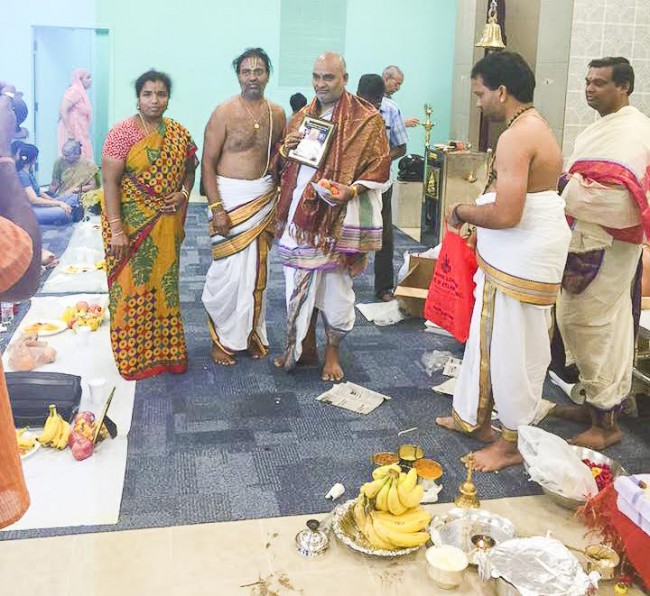 The priests then blessed all the sponsors, devotees and visitors. The devotees were requested to support the new temple by regularly attending the temple to offer their prayers, participating in all the festivals, volunteering and donations.

Sri Venkatraman and his wife Hemal Subbarao were also felicitated. Sri Venkatraman gave a brief history of the temple. He said that two years ago the premise was a school gym. Some of the Hindu community members were getting together for bhajans and other cultural events. In November 2014, Sri Keshava Murthy decided to renovate the premises and inaugurate a temple. The dream has been realized and he is hopeful and optimistic that with the support of the devotees the temple will continue to serve the community.

This is the one and only tallestSriMahaLakshmiTemplein the U.S.A. Hopefully after seven  years, with God’s grace, the temple will thrive with community support.