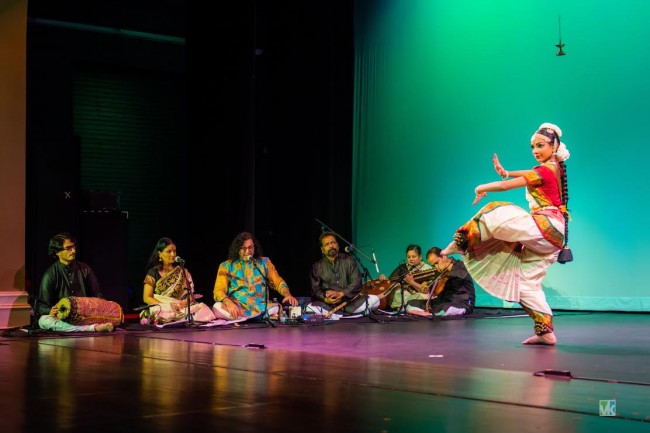 Atlanta, GA: We bow to the Saatvikam Shiva, whose Aangika is the world, Vachika is the entire language and whose Aaharyam are the moon and the stars. With salutations to Lord Nataraja,  12-year-old Saidharshana Dhantu, daughter of Jayalakshmi and Venkatraman Dhantu, mesmerized the audience with her charming personality, grace, simplicity, scintillating footwork and composed abhinaya (expression) in her Bharatanatyam arangetram (debut performance). The arangetram took place in the beautiful Buford Community Center’s Sylvia Beard Theater, on January 17, 2015.

Dharshana is a student of Naatya Dhaara – Center for Performing Arts- under the leadership of her teacher/mentor, Uma Palam Pulendran, who is a foremost disciple of The Dhananjayans. Arangetram literally means a dancer’s first full length performance as a soloist. However, Dharshana’s performance surpassed expectations of a typical arangetram. She stole the hearts and minds of the audience through her clean and elegant lines in nritta, (pure dance) involved abhinaya (expression) and maturity in performance beyond her age. Her program commenced with a soulful rendering of Amma Ananda Dayini varnam in Ragam Gambheera Naattai in praise of the Sattva aspect of Shiva and Parvati by the well-known vocalist Shri. Babu Parameswaran ofIrvine,California. This was followed by Gaayiye Ganapati, in Ragam Keeravani, set to Adi talam, where Dharshana paid her obeisances to lord Ganesha. A well-choreographed composition by Prof C.V. Chandrashekar, Dharshana’s representation of the Lord was beautiful and elegant with sculpturesque poses. 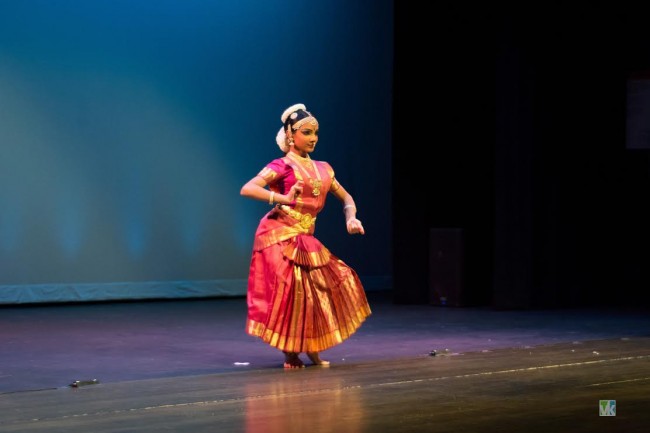 This was then followed by a Keerthanam, Srinivasa in Ragam Hamsaanandi, a composition of Papanasam Sivan and choreography by The Dhananjayans, in Praise of Lord Srinivasa who is the Lord of Seven hills. It was beautifully ‘narrated’ by Dharshana describing the birth of Lakshmi from the milky ocean andKrishna’s protection of Draupadhi, when she was disrobed after the Pandava’s loss in the gambling game.

The highlight of the evening, Varnam in ragam Lathangi, not only showcased Dharshana’s proficiency in Nritta and Abhinaya, but also demonstrated her stamina and her maturity in handling this intricate item with such ease and discipline. This Varnam is a choreography of Smt. Radhika Shurajit to the beautiful composition of Poetess Andavan Pitchai. Post intermission, Dharshana was beautifully dressed in a white Bharatanatyam pant costume ready to present a Kamakshi Stuti, a well-choreographed piece by Uma, her teacher/mentor.

The beauty of Sri Kamakshi was well portrayed by Dharshana with her composed rendering of Abhinaya. This was followed by a fast paced Idathu Padam in Ragam Khamas by Papanasam Sivan.  Choreographed by Uma, this was a dynamic and an expressive piece in praise of the cosmic Lord Nataraja with fast paced footwork. This item demanded fine sense of balance and rhythm. Dharshana maintained all these aspects very well. 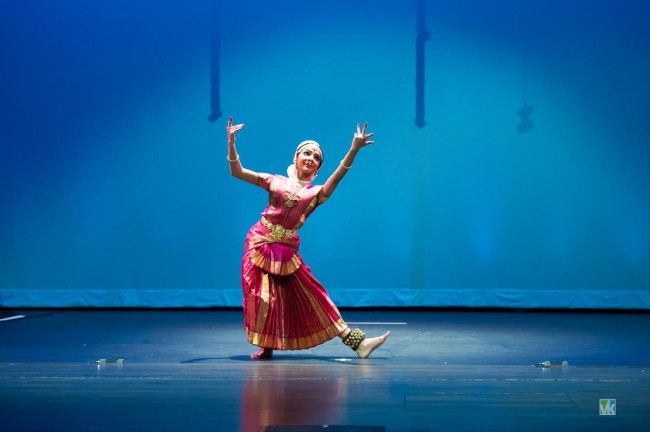 The final Abhinaya piece was a beautiful Ashtapadhi by Sri Jayadeva, Chandana Charchita and choreographed by Uma, depicting Krishna’s beauty with garlands dangling on his sandal wood pasted, dark cloud colored body and his playing with Gopikas. Being a devotee of Shri. Muralidhara Swamigal, Dharshana’s love for Krishna took the audience to the land of Krishna, Brindavan. The whole auditorium was filled in Krishna Bhakti with a soulful rendering and soulful presentation. The final Nritta piece was the Tillana in ragam Brindavani composed by Sri Balamurali Krishna and choreographed by Uma comprised of fast paced scintillating footwork set to different nadai or rhythmic cycles.