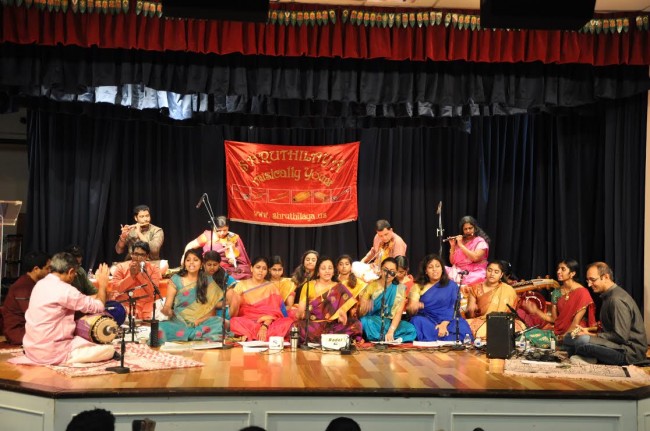 The event started with bhajans and keertanas by kids of Geetham levels.  They were ably accompanied on the violin and mridangam by budding talents Kirti Subramanian, Gautam Krishnan , Anirudhah Narayan, Varsha Ramalingam and Sriman Thangaraj.

The whole segment got enhanced by the instrumentalists C.V Subramanian and  Jassotha Balasubramanian on the violin, Prashanth Kallur and Jayashri Rajagopalan on the flute, Usha Venkatachalam on the veena, Ravi Subramanian on the electric guitar, Suresh Kothandaraman, Santosh Chandru and Amit Narayan on the mridangam , Vikash Achutaramaiah on the morsing & kanjira.

The second segment started with a scintillating flute concert  by Prashanth Kallur  accompanied by Jassotha Balasubramanian on the violin, Suresh Kothandaraman on the mridangam & Vikash Achutaramaiah on the morsing.

The concert was followed with soulful renditions presented by children and adult students, with compositions of trinity, pre and post trinity .

An ensemble was another highlight of the event. Carnatic vocals by Shruthilaya students collaborated with Sebastian School of Music for western violins along with Indian and western percussion.

Excellence & Recognition Awards were presented to selected students based on their progress.

The sound system was competently handled by Adam Vernon.

The daylong event of musical bliss concluded with mangalam.

Amal Clooney to discuss freedom of expression in India