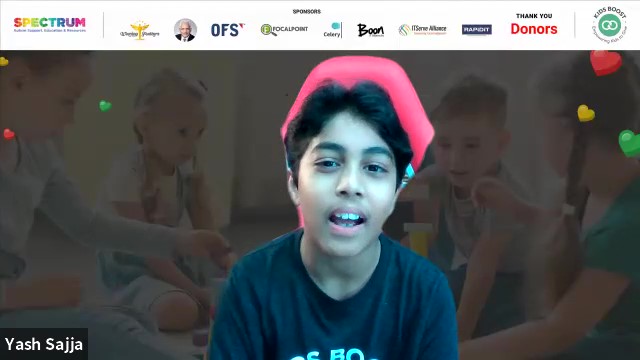 Atlanta, GA, December 4, 2021: An awareness initiative by 11 year old Yash Sajja, Autism is not contagious, but Kindness is.. raised over $25K, surpassing his initial goal of $20 K which was donated to Autism Support Group, Spectrum. Yash organized a Virtual Talent Show via Kids Boost on Nov 21, 2021 to support his cause.

Spectrum Autism Support Group was established in 1998 to provide support, education and resources for individuals and families impacted by autism. It currently serves over 1,500 families in Gwinnett County and the surrounding Metro Atlanta area and a well-known resource in the Autism community.

“A cause that is important to me is Autism awareness and disability inclusion. I also want to support autism and disability inclusion because many kids with it get bullied and judged. They do not deserve to get judged for something that’s not their fault.” says Yash. His personal experience with Autism has been through a non-verbal friend with the condition. “At first, I thought Autism is a learning disability, but it is much more complex than that,” he observed.

His observation, as it turns out, is true. Autism, or autism spectrum disorder (ASD), refers to a broad range of conditions characterized by challenges with social skills, repetitive behaviors, speech and nonverbal communication. According to the Centers for Disease Control, autism affects an estimated 1 in 44 children in the United States today.

There is not one autism but many subtypes, most influenced by a combination of genetic and environmental factors. Because autism is a spectrum disorder, each person with autism has a distinct set of strengths and challenges. The ways in which people with autism learn, think and problem-solve can range from highly skilled to severely challenged. Some people with ASD may require significant support in their daily lives, while others may need less support and, in some cases, live entirely independently. (cited from: https://www.autismspeaks.org/)

“You are an agent of change in your community,” Claire Dees, Co-Founder and Executive Director of Spectrum said of Yash. The funds he raised, she noted will support an entire year of programs at the organization. Claire Dees and Rochelle Geiman (Stone) founded the group and realized there was a big need for support when over 100 attended the first meeting in October 1998. Spectrum offers various programs for families including Monthly programs for families, social skills, respite programs, camps for families, Drama, Lego and Technology clubs, to name a few.

Who inspires Yash? “A person I admire is my dad (Pramod Sajja, President/CEO, Paramount Software Solutions Inc). I admire him because he is so good hearted. Also, when I have trouble with my assignments, he always takes time out of his busy day to help me. He is the person I want to be when I grow up. One of the other reasons I admire my dad is he is always nice to his employees and even in sad times he is always cheerful and trying to make us all feel better.” “Nonprofits and charities make a difference in a big way, and we can individually contribute to make a huge difference too. The other reason everyone who is eligible to donate should do it is because after the donation, you can feel happy and proud knowing you helped someone in need,” says Yash about his reasoning for donating to charities. Simple, but impactful, it is the thing for the rest of the world to remember, particularly around this time of the year. As Isabel Allende quotes, “We only have what we give.”