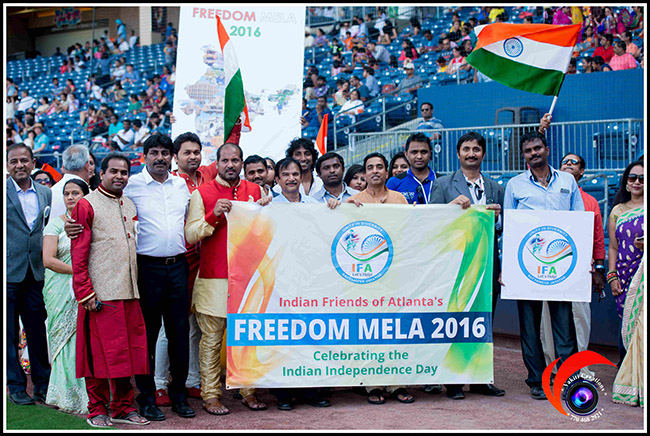 The venue was imaginatively decorated to showcase the burgeoning India-US partnership. The sidewalks leading to the entrance to the venue were  lined with Indian and U.S. flags. The stadium amphitheater was adorned with large portraits of brave Indian freedom fighters, leaders and historic landmark events of the freedom struggle.

Past the concourse was the 1000 feet long Indian tricolor draping the seats from end to end. The decorated Freedom Mela stage, the centerpiece of the spacious stadium sitting on the 2nd base provided a grand spectacle to the audience. 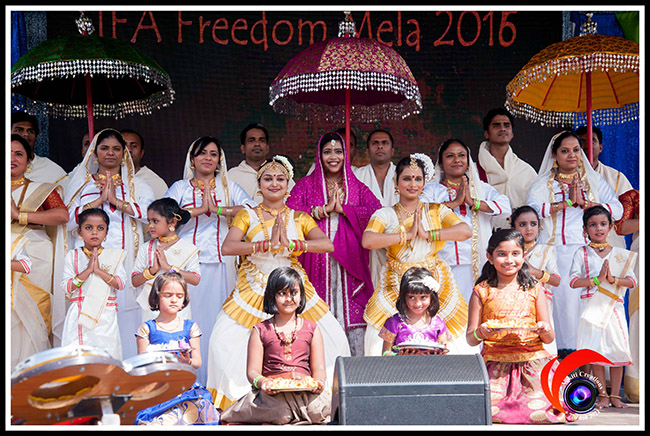 Composed and bubbly emcees Monty, Rhea and Shrivani kept the audience informed and engaged throughout, presenting over 40 non-stop  dazzling cultural performances featuring over 700 participants for over five hours by participants from diverse associations and professional dance academies and entertainment groups.

Special treats were provided by AATMA Preforming Arts from New York, Mickey Singh, and an illusion show by Mystique. And the cherry on the cake was the magical fireworks with evergreen Indian patriotic songs including Vande Mataram. 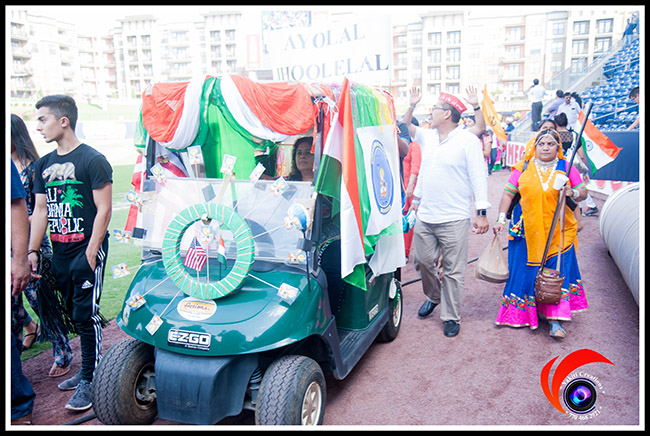 This was followed by  an enthralling performance by over 100 participants.

A highlight of the event was the colorful parade by various States of India to the accompaniment of live music from musicians led by Manisharma (famed Tollywood music director). More than 600 people participated in the parade including Gujaratis, Maharashtriyans, Telanganites, Andhraites, Keralites, Tamilians, Rajasthanis, Sindhis, Punjabis, Oriyans and various non-profit groups. It exemplified the rich and diverse culture, the uniqueness, the spirit and the unity of Indian States. This year, there was the extra flavor of  floats for the parade. The decorated floats showcased the unique cultural heritage of different States. 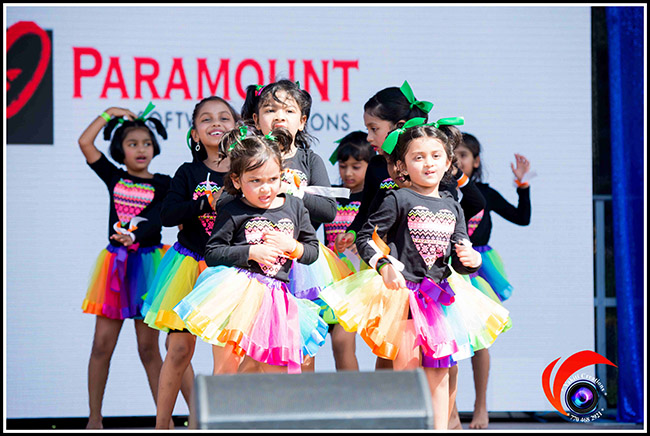 Jogy K Jose of Divinity Audio Visuals provided great visuals and audio. Vakiti Creations covered the event through his team of photographers. Kathyayini Kosaraju Pinnika beautifully decorated the stage. Bytegraph provided the LED behind the stage. IFA thanked TATA for its help throughout and also for helping out in registration and parade.

IFA team said that it wishes to recognize the performers and their parents and the tireless efforts of over 200 volunteers. The team is extremely grateful to Gwinnett Braves Management, Rick Fultz and Ryan Stoltenberg, Lisa Anders of Explore Gwinnett, Shiv’s Institute of Dance and ‘Making your Life’ for providing all the colorful flyers.

“We are overwhelmed by the support and participation from the community and want to thank each and every one that participated in the Second Freedom Mela and contributed to its grand success,” the IFA team said through a press release.

Preity Zinta a star attraction at 20th Festival of India