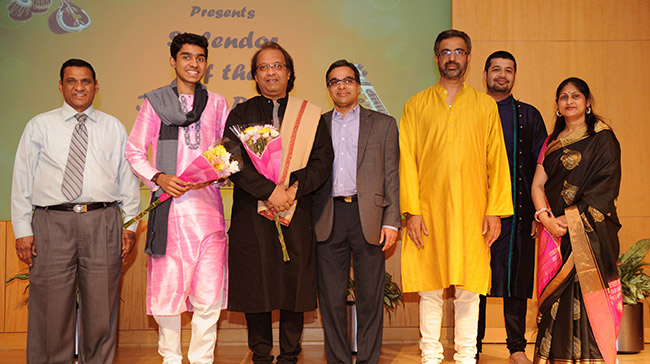 Atlanta,GA, June 3: Music lovers in Atlanta recently witnessed a live sitar concert by Pandit Nayan Ghosh, acclaimed in India and around the world as one of today’s foremost musicians. On Saturday, May 14th, the Speakers Auditorium at Georgia State University Student Center was filled with applause from the audience as they enjoyed Splendor of the Indian Ragas, a unique concert featuring some of the beautiful ragas from the Hindustani style of Indian classical music which are traditionally played during the afternoon and early evening periods.

Eshana Enterprise, through its avenue of organizing and hosting art and cultural events, aims to share topics of educational interest with its audience. This topic of interest could be: promoting a social cause, an organization or an individual, or presenting a snippet of knowledge from our rich Indian cultural heritage. At this concert, The Oxford Encyclopedia of the Music of India was the topic of interest. With Pandit Ghosh being present that evening, it seemed only natural to give due recognition to this wonderful wealth of musical knowledge.

Started in 1961 by the late Padma Bhushan Pandit Nikhil Ghosh, father of Pandit Ghosh, The Oxford Encyclopedia of the Music of India is the first of its kind spanning 50 long years of research and compilation. First published worldwide as a three volume series in 2011, under the Oxford University Press, it depicts 2,000 years of history of Indian music. Entries include details of the various genres of music (from classical to film-originated), explanations of technical terms, descriptions of instruments, biographies of vocalists, musicologists, saints, poets, gurus, composers and instrumentalists as well as the different dance styles.

This was followed by an introduction to the exquisite instrument, the sitar, its origin and history as well as a brief tribute to its great pioneers and masters such as Pandit Ravi Shankar and Ustad Vilayat Khan to name a few. This led to Pandit Ghosh’s first performance of the evening featuring “Raag Vachaspati”- a beautiful afternoon raag, recently borrowed and incorporated from the Carnatic music system.

The second half of the performance featured “Raag Desh” as well as “Jhaptaal”, a 10-beat pattern performed on the tabla by Ishaan Ghosh.  The audience was blown away by both Pandit Ghosh’s rendition of the ragas and Ishaan’s dexterity on the tabla, prompting them to applaud spontaneously throughout. To the surprise of everyone present, Pandit Ghosh ended the evening by singing a “Baul” folk song. Bauls are a religious and cultural group of India, found primarily in the state of West Bengal in India and in Bangladesh. They are best known for their songs and poems to the God who dwells within them. They are usually untrained singers but their performances hold immense appeal and are often times soul stirring.

Hailing from an illustrious family of legendary musicians like his own father, the tabla legend of the 20th century, Padma Bhushan Pandit Nikhil Ghosh, and elder uncle, the pioneer flautist Pannalal Ghosh, also known as the ‘Father of North Indian Flute’, Pandit Ghosh is held in the highest esteem in the classical music world today, for being the only maestro of two diverse instruments – the sitar and the tabla. He received his training in both these fields, in addition to vocal music, from his great father. Today, he is considered an important reference source to an entire generation of young musicians and aspirants.

Ishaan Ghosh, a natural tabla player and a child prodigy, is considered a shining example and torch-bearer of classical Indian music. He started accompanying his father at sitar concerts at international music festivals from a very young age. He has also been invited by renowned musicians and institutions in India and abroad for both his solo and accompaniment performances.

The evening came to a conclusion with a very informative Q & A session between Pandit Ghosh and the audience. The father and son’s duo performance was thoroughly enjoyed by all present – especially the moments when young Ishaan was seen smiling and confidently keeping pace with his father. Together, they created impromptu melodies which were immensely pleasing to our ears.

A diverse group of music enthusiasts from across Indian and non-Indian communities were in attendance. It was a unique opportunity for all to enjoy great musicians, as well as gain knowledge and insight to both instruments as well as classical music. The concert ended with a standing ovation for the artists.

For more information about this event log on to: