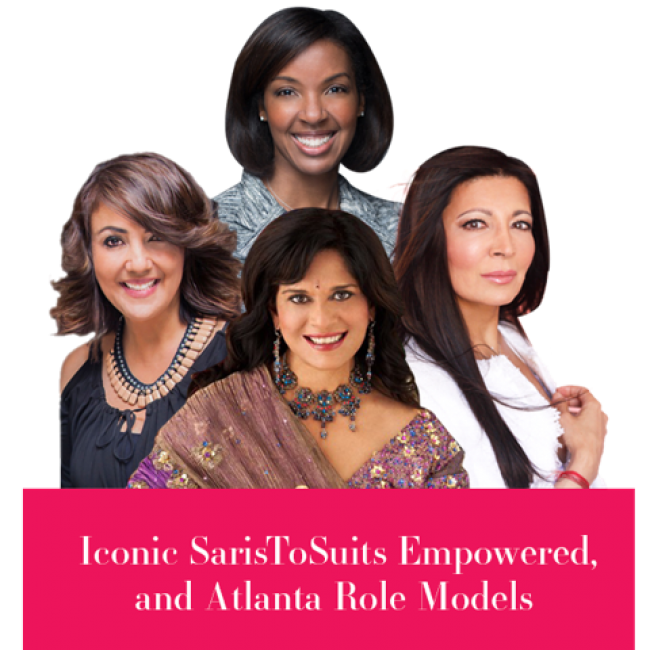 The evening of May 31, 2018 the halls, and rooms of the stunning historic mansion will be filled with women in ornate silk saris and tailored suits, along with men who serve as their ambassadors and those who seek business opportunities or to be cultured.

Pratibha (Patti) Tripathi, who founded the charity ‘Saris To Suits’ in 2012 in Sarasota, Florida, worked in Atlanta for nine years in her 20s and 30s as the first (and perhaps the only) female reporter/anchor of Indian origin for the CNN News Group and reporter for CBS-Atlanta news before leaving the area in 2005 for DC, Dallas, and Sarasota-Chicago.  She returned to Atlanta in 2016.

The charity’s 6th year anniversary celebration at the Wimbish Mansion is titled:  Saris To Suits- East To West to South: “Women FIRST, Empowerment for All”.

Since 2013 Saris to Suits has unveiled four calendars of inspirational and empowered American women of South Asian origin. Each woman in the calendar has a unique story, and each joins hands to raise greater awareness about cultural and gender competency for women’s empowerment. The efforts are meant not only to dignify those who are marginalized, but also to inspire young women and girls to persevere to achieve their American dreams.

Many firsts are part of “Women First” event. Among the speakers is the first female dean of Goizueta Business School, Dr.  Erika H. James.

“Gender equality is something I am very passionate about. While we can acknowledge great progress in many areas, there is still work to be done to make sure women have an equal footing in the workplace, community, and higher education. I’m excited to partner with Saris to Suits to raise the rhetoric around the issue and recognize the women that are out there empowering themselves and each other,” said Dr James

The first US Ambassador to India of Indian origin, Richard Verma, and the first Indian-American to win Miss America, Nina Davuluri are also scheduled to speak at the event.

INTERVIEW: I was fortunate to have strong women role models: Ambassador Richard Verma

The 2017 calendar campaign role model Atlanta-based Hardeep Melamed, whose family fled Uganda’s Idi Amin’s regime for Canada, has been running businesses since she was 16 – from an Indian restaurant, to women’s fashion boutique store to her latest venture PurseN for “women on the go.’

Dr. Naina Sachdev, who posed for a purpose in 2015, travels fromBeverleyHillstoAtlantato speak on fusion of health and beauty for women’s empowerment.

Consul General Nagesh Singh will give an address about his three-year tenure inAtlantabefore he returns toDelhi. The Asian-American community has grown rapidly and its enormous buying power was recently touted byGeorgiaStateUniversityin a study. The inspirational Fox News anchor Kelly Wright, who has performed with Indian star Bappi Lahiri, travels fromNew Yorkto perform as well as serve as the program emcee.

Emory’s marketing Guru Dr. Jag Sheth, the owner of Nair Industries, PwC and the maker of home accessories Surya have tables at the event.  Surya CEO Satya Tiwari has donated a fine rug with retail value of $10K for live auction.

The creative, progressive Indian fusion menu is being created by Taj Hotel-trained Chef Anish of Jai Ho which opened off beltline one year ago.  Chef Anish will be auctioned to get ‘men in kitchen’ to learn to cook and host a dinner for their partners for a party of up to 30 people.  Representatives of PwC, Nexus Clinical, Chick-Fil-A Foundation are among the sponsors attending the event.  The Atlanta Chamber of Commerce is one of the partners.

Tripathi invited US Ambassador Richard Verma to be a Saris To Suits Ambassador to impress upon ‘suit’ counterparts to support women’s ambitions and gender equality.  Details:  www.SarisToSuits.org

INTERVIEW: I was fortunate to have strong women role models: Ambassador Richard Verma

I was fortunate to have strong women role models: Ambassador Richard Verma

I was fortunate to have strong women role models: Ambassador Richard Verma | NRI Pulse May 7, 2018 at 11:30 am

[…] RELATED: Women First, Empowerment for All: Saris to Suits gears up for 6th anniversary celebration […]

Leave a Reply to I was fortunate to have strong women role models: Ambassador Richard Verma | NRI Pulse Cancel Reply