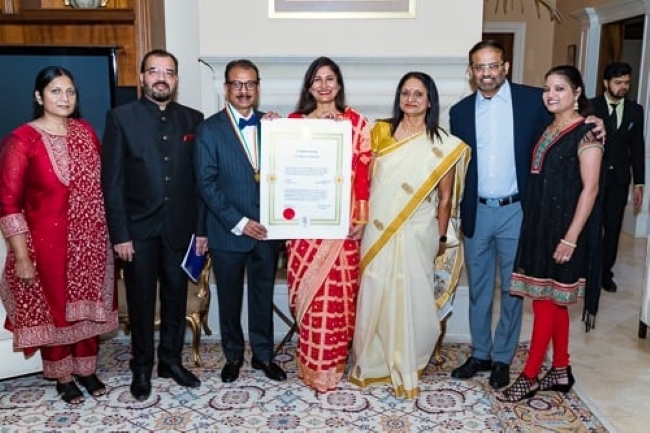 Atlanta, GA, December 15, 2021: Amidst a group of accomplished physicians and fellow award winners of the current and previous years, Consul General of India, Atlanta Dr. Swati Kulkarni felicitated Dr. Sudhakar Jonnalagadda with presentation of his Pravasi Bharatiya Samman Award (PBSA) on December 1, 2021. The award was conferred to him in the medical field for his leadership of AAPI, by the President of India, Ram Nath Kovind at the 16th Pravasi Bharatiya Divas (PBD) Convention held virtually earlier in the year, on January 9, 2021.

PBSA is the highest honor conferred for non-resident Indians, persons of Indian origin, or an institution/organization founded and run by non-resident Indians or persons of Indian origin for their outstanding achievement both in India and abroad. This year’s theme “Contributing to Atmanirbhar Bharat,” based on Prime Minister Modi’s new slogan of self-reliance, is a developmental goal the government hopes the diaspora will contribute to.

At the event, Dr. Kulkarni also invited Consul General of Mexico, Javier Díaz de León and Veronica Maldonado Torres, President and CEO, The Georgia Hispanic Chamber of Commerce and Gilda (Gigi) Pedraza, Founder & Executive Director, Latino Community Fund in her efforts towards fostering relations with Hispanic American community. Recognizing the women as pillars and corner stones of the Hispanic community, Hon Javier Díaz de Leó also highlighted the intersections of both cultures and commended the Indian American diaspora for their contribution in all aspects including education, healthcare and business.

In her address, Dr. Kulkarni highlighted Dr. Jonnalagadda’s contributions during his tenure as the president of AAPI when he endeavored to help India at a time it needed most, during the second wave of the pandemic during which hospitals and the medical systems were overwhelmed. Under his leadership, AAPI raised over 5 million dollars sending thousands of oxygen concentrators, 300 ventilators, PPE, along with lifesaving equipment to India. Dr. Kulkarni also noted that the telehealth services through which AAPI physicians advised thousands of patients virtually. Dr. Kulkarni also released a book Immigration Junction, that serves as a handbook of dos and don’ts for immigrants on foreign land. While real identities of folks are not used, each of the stories harbor a lesson and also highlights various ways the Consulate jumps in to help immigrant families in trouble, along with the regular visa processing services they are usually known for.

“I want to express my sincere gratitude to the government of India for selecting me for the prestigious award and for Dr. Swati Kulkarni for arranging this event. In recognizing me, the government has recognized all the medical professionals who have been in the forefront fighting Covid and helping patients,” Dr. Jonnalgadda said, accepting his award.

WATCH!! A FUN, CANDID INTERVIEW WITH VIVEK OBEROI! ONLY ON THE NRI PULSE YOUTUBE CHANNEL!

Excellent work.
I m proud of you.