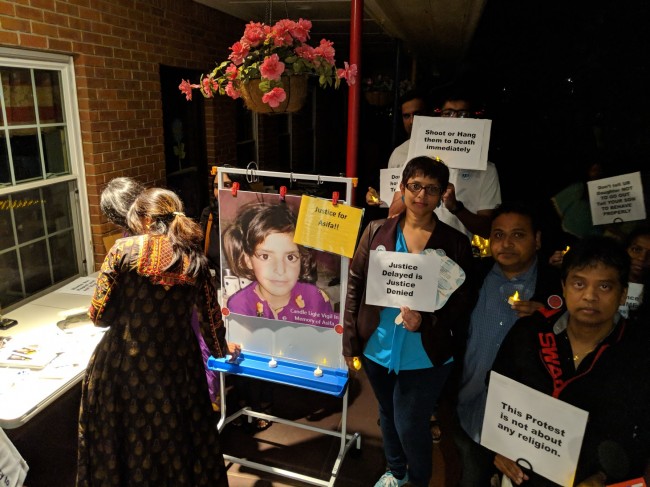 Atlanta, GA, May 7, 2018: All of eight, Asifa, who set out to graze her family’s horses at the foothill of the Himalayas one winter afternoon never came back home. The horror and terror the little girl was put through before she breathed her last, has disturbed, disillusioned and divided her country, and the outrage has spread worldwide. Kalyani Madgula, an Atlanta resident and IT professional decided to hold a candlelight vigil in memory of Asifa and other victims of sexual crimes at the Ivy League Academy on Peachtree Road on April 27, 2018.

Jyothsna Hegde of NRI Pulse, Aparna Bhattacharyya of Raksha Inc., Dr. Nazeera Dawood, President at Vendorship and former Chief of Staff, Office of the Chairman, Board of Commissioners, at Fulton county, Atlanta residents Sarika Raul and Ramesh Kotike, and Hemal Subbarao, Owner of Ivy League Academy spoke about the incident in particular, its lifetime implications on the victims and their families and its larger repercussions on society. 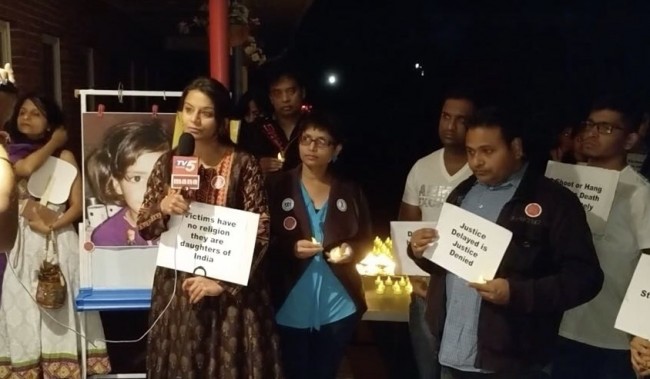 “This is about giving voice to the voiceless.  The rise in sexual crimes against women and kids has shocked us and the recent case is the straw that broke the camel’s back.  A time comes in our lives when we say enough is enough,” said Madgula.

Citing various examples of the rise in child rape and sexual abuse in India, Madgula expressed concern over lack of tougher laws, enforcement of laws and rooted for faster judiciary. Stressing over the fact that religion was immaterial and justice was of prime importance, Madgula said she believes justice delayed is justice denied. “The accused should be punished with the death penalty irrespective of their age and religion,” she said.

“First, they are abused by the perpetrator and later by the system and the society,” Madgula added while highlighting issues faced by the victim after the rape. “The excruciatingly slow pace and the tardiness of the Indian judiciary are enabling the perpetrators of crime.  A functioning judiciary should be a priority for India if these crimes rates have to come down.  Most rape victims who are emotionally and physically weakened are dragged to courts for decades to seek justice and at the same time, they are attacked mercilessly by the society too. The total lack of compassion for the victims hurts them psychologically, too,” she noted.

“Working as an advocate for survivors for over 23 years, one thing I can tell you is that sexual assault is a global problem. We not only need to seek justice in India but also across the communities we live in,” said Bhattacharyya.  She also talked about the importance of empathizing with the victim. She urged the audience to empower the victim to fight for justice.

Continuing the sentiment of empathizing with the victim, Ramesh Kotike pointed out how the term “kalank”(roughly translating to disgrace) is used when a girl is raped. The “kalank” bearers should be the perpetrators of the heinous crime and not the victim, he noted.

Asking the crowd to close their eyes and pick the most significant item from their house in the case of a catastrophe, Dawood underlined the importance of wanting a stranger to pick the same thing most important to you, your child. “We must care for all the children as our own. We must raise our voices when another child has been wronged,” she urged.

Hemal Subbarao invited her teen daughter to join her talk as she expressed anguish over the incident and demanded justice for Asifa and all victims of rape.

Sarika Raul lauded Kalyani in her efforts to stand up against sexual crimes. She expressed concern over growing crimes against women and called for immediate justice. 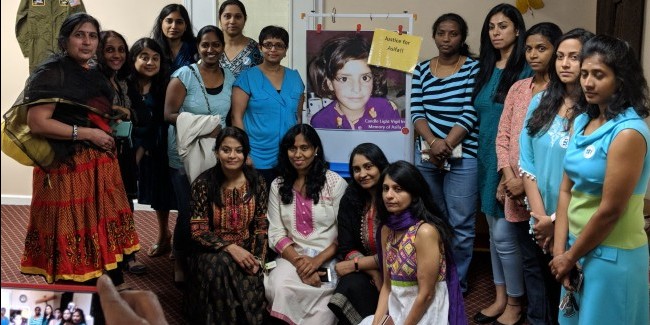 Hegde said rapists aren’t made in a day. “They are made after years of not protesting and turning a blind eye towards their acts. It is time for people, as a society to take a firm stand against rape. Some voices make it to media headlines. Not all do. For the cries that went unheard, for all women whose bodies were battered into battlefields, let there be outrage.  Let there be outrage for every brutality, let there be justice for every heinous crime and most of all, let there be love for one and all, irrespective of caste, creed or color,” she said.

Picking up candles, the crowd held a small a march for Asifa displaying various slogans including, “Don’t tell me how to dress, Ask them not to rape”, “Punish the rapist, Not the victim”, “This protest is not about any religion”.

The candle light vigil, held in the month of April, the Sexual Assault Awareness Month seems befitting of the awareness agenda. But the issue of rape and abuse must be addressed at all times, under all circumstances and most of all, to every victim whose life was shattered, for no fault of theirs. As the candle lights in the vigils across the world burn out, we can only hope that just as a citizen such as Kalyani Madgula, with no political agenda and really nothing to gain, found her inner calling to invoke justice and protest sexual violence, all citizens, across all nations, find the courage to raise their voice against the heinous crime and ensure that the victim is supported and treated with empathy, and that justice is served and the guilty punished to the full extent of the law. 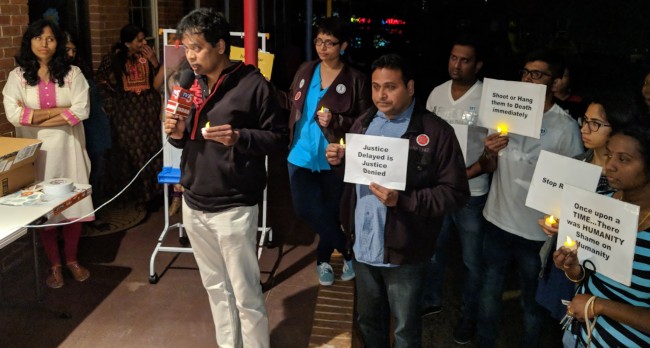 Women First, Empowerment for All: Saris to Suits gears up for 6th anniversary celebration